A local tech company supports artists and the community with a gallery space featuring rotating exhibitions.

Thursday, amshot, an Oklahoma City-based IT and software development company, will unveil the artwork of illustrator Sam Washburn as part of its fresh new art series exhibITion. The series acts as a way for the tech com-pany to support its local arts scene, allowing the artist to gain recognition while simultaneously raising money for the community.

Every quarter, a new artist will be featured. Washburn has the honor of headlining the series’ debut.

“I was really humbled when they asked me to do it because it’s going to be a really exciting thing for me,” he said. “I also like the fact that hopefully we can raise a lot of funds for the arts here in Oklahoma City.”

Drawing since he “was knee-high to a frog,” Washburn graduated in 2009 with a Bachelor of Fine Arts degree from the Sam Fox School of Design & Visual Arts at Washington University in St. Louis, Missouri. He has been working as an illustrator ever since, earning him the attention of a number of organizations focused on creative design.

He recently teamed with Robot House Creative to design a new box for Oklahoma’s own Hideaway Pizza. Now he’s embarking on another creative expedition with amshot.

He met Rick Alliss, amshot director of software development, and Michael Thomas, amshot CEO, at OKC Midtown Rotary, an organization to which all three belong.

Friends of Washburn, Alliss and Thomas approached him a couple years back, suggesting he do a piece for their company.

“[The process of recruiting Wash-burn unfolded in] a natural progression from that first meeting where we wanted some art to explain what we do in kind of a more practical way,” Thomas said. “[It] just kind of evolved into this community building, awareness-building piece that we’re all really excited about.”

What was initially intended to be a couple large pieces eventually became a series taking Washburn about a year and half from concept to creation.

The cornerstone piece, made up of 58 illustrations combined into one, is intended to act as a symbolic expression of the company’s message.

“That’s the big surprise: They combine to form a larger piece of artwork that is representative of amshot and their missions and goals as a whole,” Washburn said.

When wrapping up the project a few months back, the decision was made to transform the series into a rotating gallery. Since then, Washburn has been running around, “busily collecting essentially everything [he has] produced in the last five years.”

Though the project is challenging, Washburn has enjoyed it, as it has allowed him the chance to hone in on his creative talents while still affording him the time to interact with others outside his studio.

“We designers and illustrators almost live like hermits,” he said. “So being social and talking to other people has been fun, but also my favorite part was they gave me a lot of creative freedom. I got a lot of freedom to sort of go crazy with the subject matter and produce a bunch of funky stuff.” 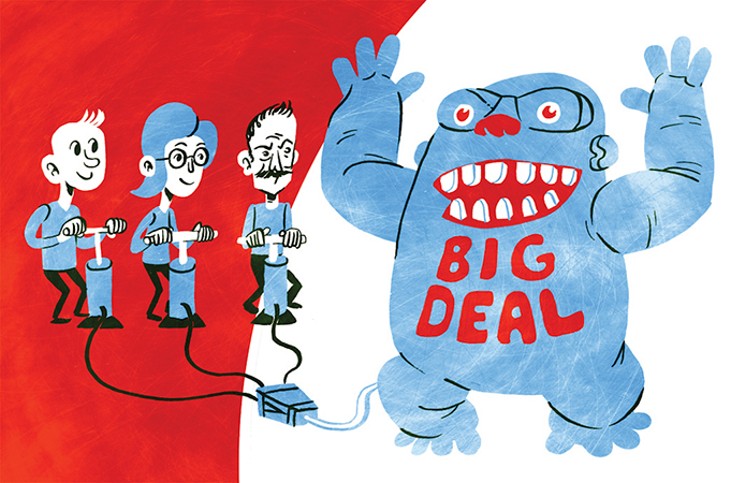 But the part he and those who commissioned him at amshot seem to like most is the opportunity to be able to give back to their community. One way they intend to do this is by giving away free beer at the event.

“Craft beer is so much fun right now, and we love to support the different breweries,” Thomas said.

Just as the artwork is an expression of the company, so are the brews that go along with it.

“We’re definitely a fun office and so, you know, we do drink beer sometimes,” Thomas said. “We’re very employee-focused, so we wanna have a very fun environment for the employees.”

However, he was quick to realize a potential liability, one that he cleverly leveraged into a charitable work.

“Then we started getting nervous because we had free beer,” he admitted. “We need to charge something at the door to keep the entire universe from coming for free beer. And that’s when we decided we would donate the proceeds of that.”

The idea was inspired by a fellow Rotary Club artist who donated 10 percent of the proceeds from one her art installments to a charity of her choosing. Community empowerment being one of amshot’s goals, it only made sense to do the same.

To Alliss, Thomas and Washburn, the charity of choice became obvious, and they were ready to give it all away.

Ian Dauteuil, president of OKC Midtown Rotary, was ecstatic to learn the proceeds would be handed over to the organization, and he readily agreed to partner up for the event.

Despite not being exclusively focused on the arts, a good chunk of the group’s support is poured in that direction.

“[Arts are] our main focus,” Dauteuil said. “Every dollar that goes back in goes right back out into the community.”

The group also has the support of the rotary district, which will often match the club’s funds two to one for larger projects. For example, they replaced a high school dance floor, a project wielding a price tag of approximately $18,000.

And it seems the club already has an idea of where to allocate the proceeds from the upcoming event.

“Schools in general are still very much underfunded in Oklahoma City, and the program that’s always first to get cut is the arts program,” Dauteuil said. “So more than likely, that money will be used to supplement some of those schools’ arts programs.”

"[It] just kind of evolved into this community building, awareness-building piece that we’re all really excited about."
tweet this

In the upcoming exhibitions, the featured artist will change, as will the brewery supplying the beer. Dauteuil expects amshot will rotate to a different charity as well.

“They might circle back with us, but I know amshot really wants to spread the wealth within the community in general,” he said.

In addition to a charitable cause and free beer, those who attend the 4:30-8 p.m. event Thursday can expect a food truck and an art sale with the opportunity to purchase Washburn’s art.

“Everyone in the office is talking about the event and how much fun it’s gonna be,” Thomas said, happily awaiting the upcoming presentation.