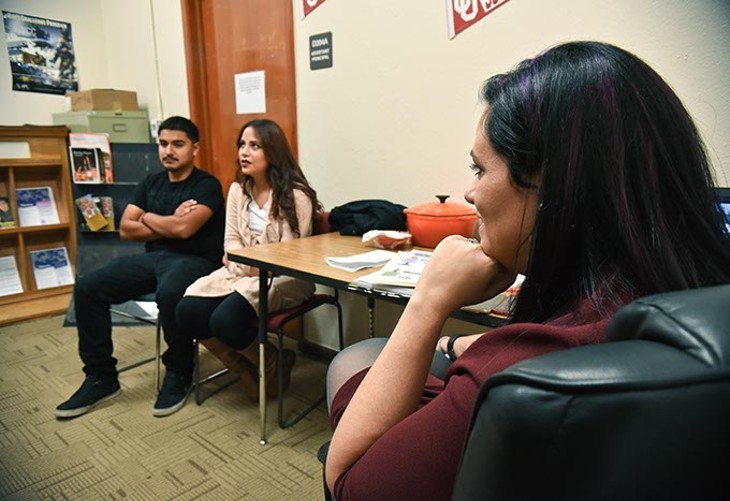 Pride and adoration filled Stephanie Morga’s demeanor and voice as she talked about her infant daughter. A smile came across her face before she said, “She is a smart baby to be only five months old.”

Seated next to his girlfriend, Humberto Herrera emanated the joy that young Kimberly brings the couple. Like Morga, he smiled and called his daughter “beautiful.”

The doting couple pulled out a smartphone to show a photo of their daughter. A cluster of “ahhs” came from around the room. Next, they showed a photo of the two embracing in maroon graduation robes. As the phone was passed around a second time, 18-year-old Morga explained it was senior photo day at Capitol Hill High School. Wearing the academic regalia heightened her enthusiasm for graduating, an achievement that is challenging for most teenage parents.

For Morga and Herrera, it hasn’t been easy, but their commitment to completing high school is met by support from home and their school.

In recent years, the teen birth rate declined across the country, but Oklahoma continues to be listed among the states with the highest teen pregnancy rates. In 2013, the Sooner State nabbed the third highest rate, before New Mexico and Arkansas, according to The National Campaign to Prevent Teen and Unplanned Pregnancy.

Studies of teen parents, especially those still in high school, spotlight the difficulty of raising a child and pursuing education. Nationally, only one-third of teenage mothers complete high school, and FamilyFirstAid.org reported that 80 percent of unmarried teen mothers end up on welfare.

The statistics of struggling teen parents drive Katie Morgan in her position as the teen parent coordinator of Oklahoma City Public Schools. Morgan joined the district in June after the position was created from grant funding awarded by nonprofit Variety Care. Prior to arriving at OKCPS, Morgan worked as a nurse for 13 years, where, most recently, her job duties included home visits with teenage moms and their infants.

“[Teen parents] get a bad rap. They need a cheerleader, someone who believes in them and knows what they can truly accomplish,” she said. “One of the questions asked during my interview was, ‘Do you believe once a teen becomes pregnant in high school, father or mother, that is the end?’ I responded, ‘No. It is a speed bump.’”

Launched this school year, Morgan’s program works to remove the barriers that teen parents face staying in school. To overcome those barriers, she meets privately with students during their non-core classes. During those meetings, conversation tends to address a student’s academics, health, emotion or career goals. It’s not uncommon for Morgan to suggest a social service agency, field a question on sexually transmitted diseases or agree to go with students to their next doctor’s appointment.

“I do everything and anything to help these kids be successful,” Morgan said. “If I don’t know the answer, I’ll find out. … I encourage them to call and text me… That way, they don’t have to wait until the next day at school.”

Teachers, counselors and school nurses refer students who would benefit from the program; Morgan also learns about expecting students from their friends.

Morgan believes her students can break the cycle by graduating high school and continuing their education. She describes herself as a resource with knowledge on Pell grants, the Free Application for Federal Student Aid (FAFSA) and programs at area colleges and technical schools. She shares opportunities unknown to many of her students, such as applications for day care grants provided to single parents pursuing higher education.

As of mid-November, Morgan has a list of 130 student participants in the program. She splits the first four days of the week visiting U.S. Grant High School and Capitol Hill High School, which are located in ZIP codes that endure high rates of teen pregnancies. On Fridays, depending on referrals and student needs, Morgan might visit John Marshall, Northwest Classen, Star Spencer, Douglass or Oklahoma Centennial high schools to meet with students.

Another aspect of Morgan’s position is to encourage students who dropped out of school because of pregnancy to return. She reenrolled three students the week of Nov. 16.

OKCPS’ program is unique in the state, but not in the nation. School districts, including those located in San Francisco; Chicago; Orange County, California; Portland, Oregon; and St. Paul, Minnesota, adopted similar school-based programs with the focus of preventing teen parents from dropping out of school. While the goal of the programs is the same, the services vary. For example, some schools work exclusively with teen mothers, and others provide group support meetings and on-site child care services.

Once Herrera and Morga found out they were expecting, the two enrolled in Lifewise, a parenting education course taught on Tuesdays after school. The two learned how to care for an infant, along with other important parenting skills. Their physician, Kyle Stewart of Variety Care, encouraged the couple to enroll in the teen parent program at their school.

Morga alluded she’s a different student this year, thanks to the one-on-one time with Morgan, who has stayed on top of her about her grades and inspired her to apply for the Metro Technology Centers practical nurse program.

Mornings are difficult, admitted Morga, who said she wakes up earlier to get ready for school and get Kimberly ready for the day. Morga’s mother cares for Kimberly while the couple is at school.

Graduating teen parents is the district’s objective, but it is also Morga and Herrera’s goal, as they set an example for their daughter.

“It will show her if we can do it, she can do it,” Herrera said. “To get further than high school is something I want not just for my baby, but for myself. I know in the future, it will benefit us all.”