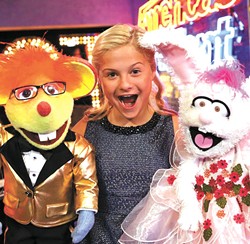 There was a time when it would have been outrageous to think the hottest ticket in town was to see a ventriloquist act, but that was a time before Oklahomans knew Darci Lynne Farmer, the 13-year-old who captured hearts around the country in an improbable run to win season 12 of the NBC reality competition America’s Got Talent.

Many people probably last saw Darci Lynne as a featured performer on the NBC holiday special A Very Pentatonix Christmas. In January, she is set to begin a national tour with a string of weekend-only dates (to not miss any school).

Before winning the $1,000,000 America’s Got Talent prize on national TV, Darci Lynne won smaller, local versions of the competition, including Edmond’s Got Talent and Oklahoma’s Got Talent.

The teen ventriloquist recently spoke with Oklahoma Gazette about her upcoming performances, school life and her best Christmas memory.

Oklahoma Gazette: Do you like traveling? It seems like you’re doing a lot of it these days.

Darci Lynne Farmer: I mean, I don’t love it, but I don’t mind going to certain places. It’s fun.

OKG: The shows at The Criterion have really taken off. What started as one show is now four shows in two days. What’s it like to have so much local interest in those shows?

Darci Lynne: It’s crazy because I didn’t think that many people would want to come. It’s weird to see it being sold out so quickly.

OKG: A lot of people in Oklahoma really love you. Is that something you’ve noticed?

Darci Lynne: Yeah, I’ve noticed that. It’s just nice to know because I’ve got a whole state supporting me. It feels good.

OKG: How have things changed for you since winning America’s Got Talent? What’s been the biggest difference?

Darci Lynne: Probably getting noticed in public a lot. I can’t really go anywhere without being mobbed. But I can pull my hair up because it’s mostly when I have my hair down that I get noticed. If I wear a hat, I don’t get noticed as much.

OKG: You have that national tour coming up. Are you excited for that?

Darci Lynne: Yes, I’m very excited. It’s going to be really fun, and I’m just glad that I get to go. I’m glad it’s on the weekends because I’m not going to miss any school, so that’ll be nice.

OKG: How is balancing school with all of this?

Darci Lynne: It’s good. I’ve gotten to be pretty much caught up. Next week is going to be a little stressful because I have finals all week. But yeah, I’m balancing it. It’s just funny because the kids have gotten used to me being at school, but I still get stares in the hall. It’s funny; all the boys have a crush on me.

OKG: Have you ever used your ventriloquism powers to try and fool your teachers?

Darci Lynne: My friends always tell me to trick my teachers. I’ve only tried to do it like once, but they always know it’s me.

OKG: What do your friends think about everything that you get to do?

Darci Lynne: They’re really excited. Whenever I get to do these big shows or TV shows, my friends get really excited. They scream a lot, especially my best friend. Whenever I get to do big things and I tell her, she literally screams. They’re just super duper supportive, and it’s fun to still have my friends and I can know that they’re my real friends.

OKG: How was the Pentatonix special and filming all of that?

Darci Lynne: It was awesome. Going out to California and meeting the Pentatonix was so cool because I’ve been a big fan of them and they’re amazing. I got to meet Jennifer Hudson, too. It was just really fun. Short little trip, and I got to perform. It was cute. It was fun.

OKG: Christmas is coming up. Are you a big Christmas person?

Darci Lynne: Oh yeah, I love Christmas. It’s my favorite holiday. I’m super excited to do Christmas songs in my show because whenever I have to learn songs for my shows, it’s more fun to learn Christmas songs.

Darci Lynne: That’s hard. I really love “All I Want For Christmas Is You” by Mariah Carey. I’m actually singing it by myself — no puppets — in my show.

OKG: Oh, what’s it like for you to sing solo?

Darci Lynne: Well, it’s pretty much the same, except I’m singing with my mouth open.

OKG: Yeah, imagine that. Singing with your mouth open — amazing.

OKG: Do you have a favorite Christmas memory of all time?

Darci Lynne: I got a new phone last year, and it was the iPhone 6S. When I went out there, usually they have our presents sitting out there, unwrapped. I didn’t see the iPhone box that the phone comes in, and I was like, “Oh darn. That’s OK though.” Then I was looking through my stocking and I was pulling things out. I pull out this thing, and it’s a white box, and I was like, “Wait, what?” I turn it around and it says iPhone on it. I start screaming like, “Oh my gosh!”

Darci Lynne: Yeah, it’s like I went from city to state to national.

OKG: Do you ever get tired of winning?

OKG: What about practicing? How regularly are you practicing the craft?

Darci Lynne: Well, I do practice with my coach once per week. And whenever I have a show coming up and I have to learn new songs, I have to practice my songs for an hour every day to get them done.

OKG: Do you have a favorite song of all time? Maybe one that you have performed or even haven’t performed.

Darci Lynne: I don’t think there’s a song I perform that is my favorite of all time, but I really like “Who’s Loving You?” which I sang with my mouse and “(You Make Me Feel Like A) Natural Woman” with Edna. And I really like this opera song that Petunia sings, it’s called “O Mio Babbino Caro.” I like those and pretty much all of the songs that I sing I like.

OKG: How many puppets do you have? Do you have any puppets that we haven’t even seen yet?

Darci Lynne: I do. I have a bird, and I got this rooster a couple of weeks ago in the mail. I don’t even know what to do with it. And I also have a donkey. I haven’t done anything with him yet at all. We haven’t had time to figure out new characters right now. But I have duck, bird, rooster, donkey, cowgirl, rabbit, mouse, old lady. So I have eight.

Darci Lynne: Yeah. It is a barnyard.