One of the most impactful music videos from Tegan and Sara’s June 2016 release Love You to Death is a video that barely features the twin sister duo at all.

Canadian indie pop sisters Tegan and Sara Quin rose to prominence in the mid- to late-2000s. Hits like “Closer,” “I Was a Fool” and The Lonely Island-assisted “Everything Is Awesome” from The Lego Movie further propelled them into stardom.

The video for “Faint of Heart” does not feature any household names, but it could nonetheless be called star-studded. Young LGBTQ artists portray queer music icons like Prince, David Bowie, Madonna and Grace Jones. There are even doubles for Tegan and Sara.

“Faint of Heart” is both a timely nod to the recently lost, gender-bending stars of the last generation and an opportunity for young performers to revel in the spotlight.

“The individuals who performed in the video are so interesting on their own, and the story itself is so free and empowering,” Sara Quin said during a recent Oklahoma Gazette interview.

Intentionally or not, Tegan and Sara define empowerment. They are female rockers in a music industry that is male-dominated, though less so than in years past. The success of their Lego Movie single has given them an audience with youth. The sisters also are two of the highest-profile lesbian musicians in the world. 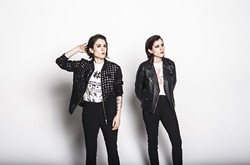 Quin said when they started their careers, their first instinct was to skirt any attempts to label them as anything more than musicians. Eventually, they embraced their status as examples of success.

“It feels a little self-congratulatory, but on the other hand, those are really true things about us,” Quin said.

She also said they faced a “tornado of discrimination” in their early careers because, as young lesbians, they were so distinct from many in the surrounding indie scene of the time. They would play big alt-rock festivals as the only female group on the bill. Usually, it was not blatant discrimination. Quin said a lot of it was casual, like the people doing it weren’t aware of what they were doing.

Artists in Tegan and Sara’s position can either embrace what makes them different or insist that others ignore it. Quin said these days, they feel comfortable in their role.

“They’re going to talk about those things anyway, so the quotes associated with it, we would rather it be messages of empowerment,” she said. “In a way, we actually started saying, ‘This is political.’ We would love to see being gay and being a woman not be such a big deal.”

There was no Tegan and Sara for Quin to look to growing up, but in the ’80s and ’90s, there was a pervasive queerness to some of the music and culture that she found herself falling into — hence Prince, David Bowie and Madonna.

“I was sort of having my mind opened by a lot of the more heterosexual pop stars at the time, but it felt a lot more gender and sexuality fluid,” she said. “I don’t ever remember thinking, ‘Oh, I’m missing something,’ until I was older.”

John Lennon died the year Quin was born, as did Steve McQueen and Alfred Hitchcock. The world lost Elvis Presley three years earlier. Quin said her parents’ generation probably felt like the world lost its great icons then, too.

It isn’t that more icons like Bowie and Prince are dying, Quin said. It’s that this generation is old enough that the people who helped shape it are dying.

“It’s weird to think who will be the significant artist that this generation will grieve,” Quin said. “It’s weird mortality stuff that you think about. You always think you’re going to be the young person, and then suddenly you’re not.”

Tegan and Sara with Shura