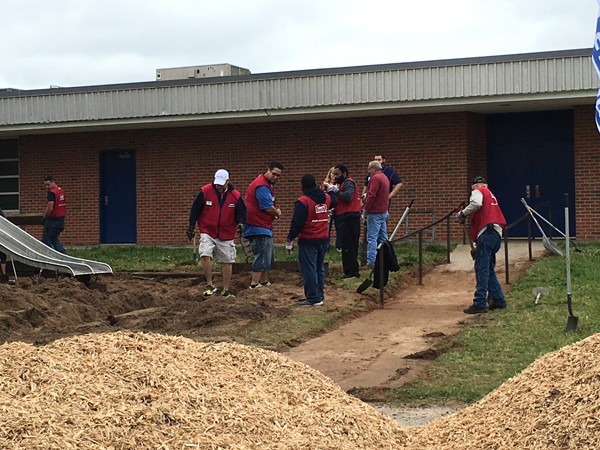 The 2016 Women’s College World Series might not seem like the obvious impetus for Telstar Elementary School’s recent renovation, but the efforts of the National Collegiate Athletic Association (NCAA), Lowe’s and Boys & Girls Clubs of Oklahoma County culminated in the school’s long-needed refurbishment.

According to Jane Sutter, president and CEO of Boys & Girls Clubs of Oklahoma County, the NCAA wanted to initiate an Oklahoma City-based Legacy Project in advance of softball tournaments earlier this month.

“The children at Telstar are definitely among those who need us most,” Sutter said in regard to the renovation’s origins.

Vanessa VanTrease, principal at Telstar Elementary and a representative for the county’s Boys & Girls Club, also voiced the necessity for the renovation.

“This is where the need is,” she said of Telstar. “We have a 99 percent poverty level out here.”

As store manager at Lowe’s in Moore, Raymond Cooper served as the logistical point man for the renovation and organized 40 Lowe’s Heroes volunteers. Cooper said he and his employees also have a personal interest in public schools such as Telstar.

Cooper differentiated the Telstar renovation from other endeavors only by the project’s grand needs.

“It was a multifaceted project,” said Cooper, as the renovation took place across multiple areas of the Telstar facility.

In order to best fulfill Telstar’s functional requirements, the NCAA and Lowe’s provided the school with a fence and gate to increase child safety. The renovation project also included new playground toys and a paved walking trail. Refurbishments inside the school building included fresh coats of paint and new refrigerators and cabinets.

The symbiosis achieved by Telstar, the NCAA, Lowe’s and the Boys & Girls Club allowed for the school’s much-needed updating to go smoothly (aside from Oklahoma’s fickle spring weather and a few minor logistical challenges). Although initial talks for the Legacy Project began in early January, VanTrease noted that actual construction began May 18 and steamrolled over the following weeks

While the project’s opening ceremony took place June 1, Sutter said that the renovated facility would not be used extensively until August. She said that significant budget cuts by Oklahoma City Public Schools deterred plans for a summer Boys & Girls Club program in the renovated facility, which will remain closed until school begins.

VanTrease said that the vital role of organizations like the Boys & Girls Club has now become critical.

“Regardless of what the State of Oklahoma can do with money,” she said, “we can’t let the children down.”

She said that community support could prevent children from feeling the impact of educational budget cuts.

Come August, long after the Women’s College World Series has played out, Telstar students will continue to reap the tournament’s benefits. Were it not for a softball tournament, none of these positive changes might have happened.

“Every single person in our community needs to think about how we invest in our children,” Sutter said. “It sounds cliché — [children] are our future — but it’s the gosh-darn truth.”