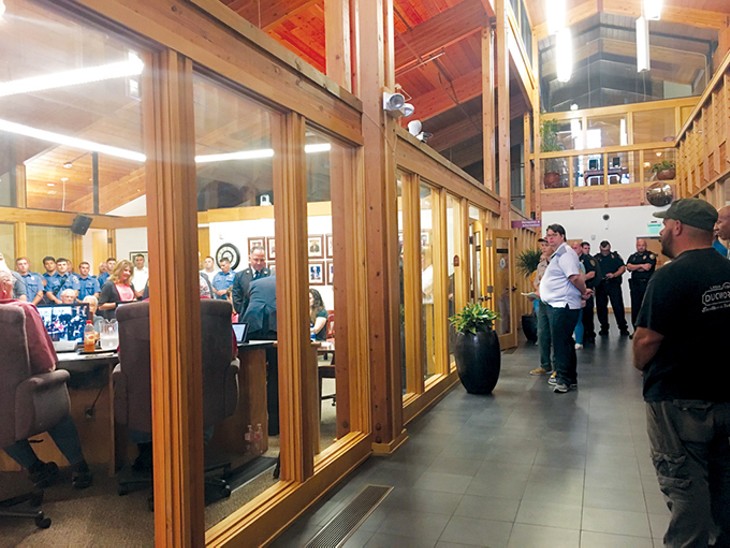 Oklahoma City Black Lives Matter president Sheri Dickerson said it was ironic but not coincidental that she was pulled over by Del City Police while en route to protest the swearing in of the department’s chief, Steve Robinson, on Sept. 4.

“I wasn’t ticketed,” Dickerson said. “They pulled me over and just took up my time. This happens to me a lot.”

When Dickerson arrived at the Del City County Chambers, protestors of Robinson’s promotion from interim to permanent police chief were wrapping up a press conference they organized to present their concerns to the media. She missed her chance to be part of the conference, Dickerson said, but she was happy to be in the company of friends Garland Pruitt, president of Oklahoma City’s NAACP chapter, and Sara Bana, director of nonprofit organization Ending Violence Everywhere.

Bana organized the press conference on behalf of community members she said are afraid of Del City police due to their use of racial discrimination and excessive force.

“People in Del City are literally afraid to pull into the parking lot of this police department,” Bana said.

Tension between Del City police and the community they are hired to protect has been brewing for years, Bana said, but peaked in 2012 when former Del City police officer Randy Harrison killed an unarmed 18-year-old black man after a police chase. Dane Scott Jr. was running away from police when Harrison shot him four times in the back. The last shot punctured his lungs and aorta and proved fatal.

Harrison was convicted of manslaughter and is currently serving a four-year prison sentence.

“If you look at the records of officers who use excessive force, you will find a history of aggressive behavior,” Faulk said. “Dane Scott’s killing didn’t come out of the blue.”

Faulk said on Black Friday in 2011, he and other members of Occupy OKC visited two Walmarts in OKC and one in Del City to protest the low wages Walmart employees were earning. In the OKC stores, Faulk said, protestors left as soon as they were asked to by police and did so without incident. However, in the Del City Walmart, protestors were tackled and arrested while attempting to leave.

Once they  were brought into the Del City jail, Faulk said they were handcuffed to chairs in the lobby because cells were full.

"This is the Ferguson
of Oklahoma."—Mark Faulk tweet this

Faulk filed a lawsuit against the police department, whose response, he said, was unexpected.

“They were very quick to settle,” Faulk said. “Everything was settled outside of court. They were willing to pay us but not to hear us.”

Faulk said one of the officers who tackled him to the ground on Black Friday was Randy Harrison. Had the police department listened to Faulk’s concerns about the officers’ use of excessive force then, he said, Dane Scott Jr. would still be alive today.

“This is the Ferguson of Oklahoma. There is a history of aggression in Del City, and not dealing with it has fatal consequences. What I know for sure is that there were two cops who tackled a handful of peaceful protestors to the ground in 2011. One went on to kill Dane Scott Jr. and one went on to become police chief,” Faulk said, referring to Robinson.

Robinson said neither he nor fellow members of the police department use excessive force or racial discrimination and that they take those accusations seriously.

“If there are concerns over how we interact with the community, then we are certainly open to hearing and addressing those concerns,” Robinson said.

Bana said the majority of police in Del City are “good cops.”

“We know that there are many good, hardworking officers in Del City,” Bana said. “The integrity they show to the community they serve is undeniable, and we want them to know that we stand with them. This press conference is about creating a culture within the city government and police department that supports people like our good officers.”

One way Del City leaders can better represent their community, Bana said, is to hire minorities.

“In the entirety of Del City’s history, we cannot find even one person of color in an administrative position,” Bana said. “There are 29 police officers in Del City and not one of them is a person of color.”

Del City’s minority population is growing, Bana said, and with 39 percent of residents currently belonging to a minority race or ethnicity, city government and police need to better reflect and represent them.

There are currently four positions open within the Del City Police Department that Robinson said will go to the most qualified candidates who apply. 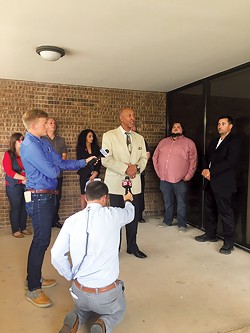 “With almost 40 percent of our community being minorities, I am sure that there is a guy who looks like me who is qualified for the position,” Pruitt said.

Pruitt said Robinson spoke with him after Tuesday’s press conference and the two arranged to meet and discuss changes the department can make to satisfy concerns of misrepresentation and excessive force.

“I wish it didn’t have to take us organizing a press conference to make that happen,” Pruitt said, “but I am glad that it’s happening. We are hoping for a productive meeting from which progress can be made. There’s a lot of work to be done here.”

Bana said the group scheduled to meet with Robinson will address the possibility of creating a citizens’ advisory board to work with the police department and a recruiting initiative that will focus on the hiring of minority police officers.

The group also hopes to equip Del City police officers with body cameras, a step toward transparency and community trust already taken by police in OKC.