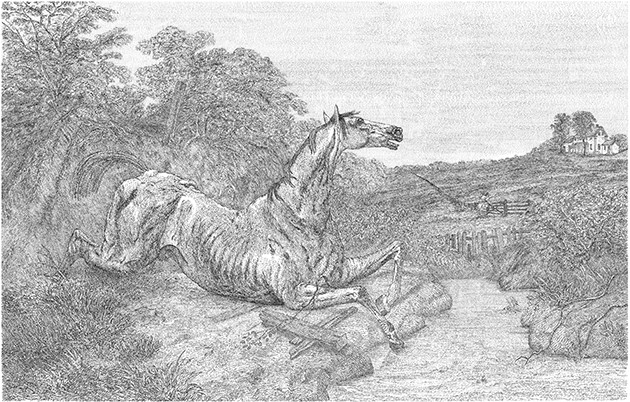 “It was actually just going to be one drawing and I’d go onto other things,” Waugh said, recalling his first use of the technique known as micrography. “It was an image of a submarine underwater based on a drawing of an airplane looking down at the sea, and like a shadow of a submarine, so it was just like waves with the outline of a submarine barely visible and a periscope sticking up in the middle of the waves.

“On the most basic level, a drawing of waves is just a bunch of lines, so it looks very much like a page of writing. So there was this very direct connection between how writing looks and how waves look. That was the whole drawing; there’s nothing else going on. But after I did that piece, I realized that using this method solved a lot of problems for me, and my drawings, before using this method, were just way too complicated. There are too many ideas. There’s too much going on, and they just overwhelmed people. This method allows me to pack a lot of information in there, but it kind of reveals itself narratively or even theatrically. And in that way, it’s kinder to the viewers. It doesn’t demand they see everything at once.”

While Waugh would later copy text from presidential speeches, economist Adam Smith’s The Wealth of Nations and congressional reports on the 2008 financial crisis and 9/11 to create elaborate ink illustrations that have only abstract connections to the text, this first work revealed an explicit link between the illustration and the handwritten words used to create it.

“My understanding of economics was very thin before, and now I think I have a better understanding of economics,” Waugh said, “but I don’t pretend to be an expert. … My mind is doing so many other things to create the image; there is this kind of melancholy. I think it’s sad that there’s so much information in the world that people can’t know as much as they need to, and then I don’t really have the time to become an expert on these things, either, because I’m making an image, which is one reason why I don’t claim to be an expert on economics. I’m more like everybody else. I’m overwhelmed by how much there is to know and how much you need to know. … The members of Congress who needed to read this, of course, have their interns and staff read it because they don’t have time to read it, either.” 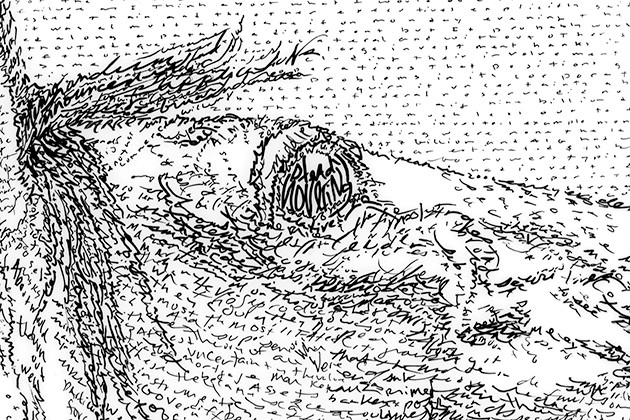 The tragic irony of information overload in the age of the internet is a recurring theme in the Seeing Now exhibition, which 21c museum director and chief curator Alice Gray Stites described in a written statement as an exploration of “what and how we see today, revealing the visible and hidden forces shaping both what the contemporary world looks like and how we consume and interpret that information.”

Waugh said he wants his own art to remain open to interpretation, even if viewers do not initially comprehend its full intent.

“I’m attracted to work that can function on many levels,” Waugh said. “I want to make work that looks good and is engaging, just on that immediate visual level, but that if people spend time with it, it’s going to give them more. If somebody only was interested in the image, it’s not like they would miss out. They would still get a full experience, just a different one. … It’s really interesting to watch people see the work for the first time and when they realize there’s something else going on. People have their gallery face on, and they’re looking pretty confident and scratching their chin. And then their eyes widen a little and they realize that what they thought is not what’s going on.”

The text used to create “The Unraveling” is a report intended to clarify the economic realities leading to a recession, but its relation to Waugh’s drawing of a horse mid-gallop is deliberately oblique. Waugh said he based the drawing on an existing etching but altered the image “either subtly or, you know, not so subtly.”

“There’s a fence post behind the horse, which I think in the original was a cross,” Waugh said. “Instead, there is a cross under the horse’s hoof that’s been trampled on, and the horse in my drawing is a little more emaciated-looking.”

Creating artwork from The 9/11 Com-mission Report proved more difficult, Waugh said, because he had a harder time disassociating from the text.

“I think I just did the first chapter, which is this devastating, blow-by-blow description of the day of the attacks and what happened on the planes, what the stewardesses were saying in the cabin,” Waugh said. “It’s so dramatic and devastating, it was hard not to read it. It took me a long time to copy it because I kept reading it instead of copying it. There’s only so many things your mind can do at once.”

Waugh is still unsure how to process the U.S. government’s most recent lengthy and high-profile report.

“When the report on Abu Ghraib torture came out, I did a piece the next month,” Waugh said, “but nothing has struck me with the Mueller report. I don’t know what I would do with the redacted sections.”

An opening reception featuring a presentation by Waugh is 7-9 p.m. May 9 at 21c Museum Hotel. Admission is free. Visit 21cmuseumhotels.com.