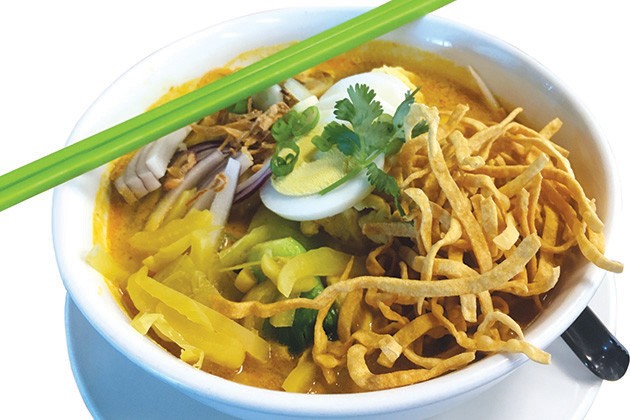 What works: The Thai basil sauce is superb and service is speedy.
What needs work: There is too much raw red onion in the garden salad.
Tip: The lunch menu includes an entree, drink and spring roll for under $10, tax included.

There are about 20 restaurants in the Oklahoma City metro serving Thai food. The newest addition is Lotus Thai, 113 NW 25th St., which is connected to Super Cao Nguyen.

Have you ever wondered how a country with only about 300,000 residents in the U.S. has contributed so greatly to our culinary landscape?

The answer is gastrodiplomacy, which has become one of my favorite words this year after stumbling across Myles Karp’s 2018 story for Vice detailing the concerned efforts the Thai government made to increase tourism to its country by promoting its cuisine abroad.

Beginning in the early part of this century, the Thai government began a multi-faceted effort across different agencies and public universities to increase awareness of Thai cuisine, hoping its blend of spice with strong aromatics like lemongrass and Thai basil will also bring tourists to the country.

Nearly two decades later, the number of Thai restaurants outside Thailand increased from 5,500 to over 15,000, and that number increased in the U.S. from around 2,000 to over 5,000, according to Vice.

The organized effort is sustained through the organization Thai Select, which awards restaurants that cook at least 60 percent Thai food and have chefs and owners that are either of Thai descent, have trained in its cooking styles for at least two years or have a certificate in Thai cuisine from an accredited institution.

Being recognized as Thai Select allows a restaurant to receive money to be used for public relations and advertising from the Thai Department of Export Promotion, among other perks like participating in international trade fairs. The Thai Select website lists almost 600 members in the U.S. on its website, but none in Oklahoma.

I was immediately impressed with
Lotus Thai’s menu. tweet this

Despite receiving no official recognition from the Thai government, the offerings of Thai food in the city have mirrored its growth across the country. On 23rd Street alone, there are three Thai options (Thai House, Moon Thai and Sala Thai) between May and Walker avenues.

I’ve only lived in Oklahoma City a little over two years, but I’ve heard stories about Sala Thai’s impact on the Thai restaurant scene in the city, and I’ve also had people tell me that it hasn’t reached those halcyon days recently. Even in the time I’ve been here, I’ve been disappointed with Sala Thai’s offerings. The portions are small, and on my last visit, it substituted mustard greens for bitter melon, which was not my idea of a good time. I didn’t grow up eating bitter melon and would rather munch on raw celery. Another area restaurant, 38 Bistro, particularly its volcano tofu, is a personal favorite. I know there are a lot of people who love Tana Thai Bistro, but I can’t speak from personal experience.

Thai House, with its buffet option and a la carte menu, is a little more of a proletariat approach and an option for the masses. I was looking for another Thai option in the surrounding area and ran across Lotus Thai, which opened earlier this year in the space that used to occupy a noodle shop, below Cafe Oasis.

Over two separate lunchtime visits at Lotus Thai, I received speedy service and dishes with vibrant flavor that didn’t break the bank while filling me up. It is now my No. 1 for neighborhood Thai restaurants. 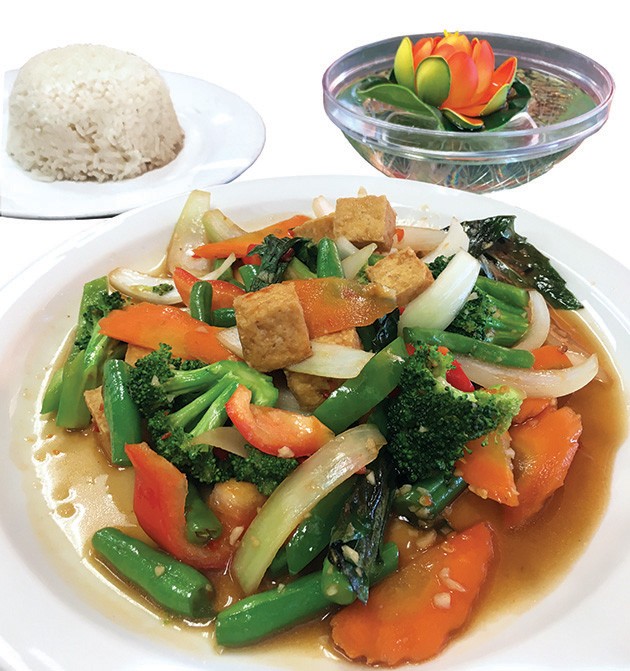 I was immediately impressed with Lotus Thai’s menu that includes ubiquitous pad thai, massaman curry, and Tom Kha and Tom Yum soups. What stood out to me is the restaurant’s selection of seafood like red snapper and salmon. It also has a dish called The Broken Sea featuring shrimp, squid, scallops and New Zealand mussels. Lotus Thai also has one of the largest selections of duck entrees in the city, rivaling its neighbors Fung’s Kitchen and Golden Phoenix.

The next time I dine at Lotus Thai, I want to try one of the seafood options I mentioned or its duck entrees where a crispy duck is served with either a house garlic, tamarind, basil or red curry sauce. It also has a dish called duck yum, which is a boneless duck salad served with red onion, pineapple, tomatoes, bell peppers and cashews. I’m unsure if the menu is using salad as in a dish served with lettuce or salad like chicken salad mixed with mayonnaise.

On my first trip to Lotus Thai, I ordered its daily special: Khao Soi, a red curry-based soup with egg noodles, bean sprouts and bok choy topped with a boiled egg, pickled red onion and crispy egg noodles. I started the meal with a house garden salad that — aside from a ton of raw red onion — was an enjoyable start to the meal; house peanut dressing is served on the side.

The Khao Soi had a nice balance of sweetness from the coconut milk and heat from the curry. The egg was hard-boiled, which robbed me of the satisfying yolk puncture of a soft-boiled poached egg, but to be fair, the menu did say it was boiled.

My wife also got an order of the Thai dumpling soup, which was served in a clear broth that had some warmth from sesame oil, and the dumplings were excellent.

On a second visit, I stopped in for a quick lunch and made an order off the lunch menu, which includes an entrée, drink and fried spring roll for $9.78, tax included. I got a stir-fry of vegetables with crispy tofu in a Thai basil sauce. The vegetables were extremely fresh and weren’t cooked to death, retaining nice crispness for added nutritional impact. The sauce was excellent, blending the unique licorice flavor of Thai basil with sweet and spicy elements. I look forward to returning to Lotus Thai and hope plenty of folks venture in to keep it in business.