Thank Ferris for this day off in OKC

When the character Cameron Frye said, “Ferris Bueller, you’re my hero,” he was echoing the sentiments of a generation of young people who came of age in the 1980s.

Ferris Bueller’s Day Off debuted in the early summer of 1986, and the ensemble cast — featuring Matthew Broderick as the title character, Mia Sara as his beautiful and patient girlfriend Sloane Peterson and Alan Ruck as Ferris’ best friend Cameron — became the best group of antiheroes, the kind that are simultaneously antiauthority and nondestructive.

Ferris and his friends wanted a day off to, as Ferris said, stop and look around to ensure they didn’t miss anything in their fast-moving lives. Oklahoma City is not Chicago, the setting for the film, but we have certainly come a long way since 1986, far enough, in fact, that a day of grown-up hooky is totally possible. We, like Ferris and friends, can take a day off work or school and spend the day enjoying what Oklahoma City has to offer. But remember, the question is not, “What are you going to do?” The question is, “What aren’t you going to do?”

Ferris skipped school, including an economics lecture by actor and economist Ben Stein. It was played for laughs with his monotone delivery of Reagan-era economic policies. If you feel like learning something before you begin your day off, you can always stop by Meinders School of Business at Oklahoma City University and see if there are any lectures scheduled. An economics professor would likely be thrilled to discuss his or her area of expertise with a novice, and it surely would be much more engaging than Stein’s droning lecture.

“I could be the walrus. I’d still have to bum rides off people.”

First, the bad news. Ferris and the gang drove around the Windy City in a 1961 Ferrari 250 GT California that was “borrowed” from Cameron’s father. Unfortunately, one is not available for rent in Oklahoma City. Given that one sold for $10.9 million in 2008, it is very unlikely that any city has one for rent. Still, a convertible worth millions of dollars isn’t really necessary to enjoy the day. You can have just as much fun in a Mazda or a Buick.

Whether you’re in a vintage Ferrari or an economical hatchback, head downtown and find parking at one of Central Oklahoma Transportation & Parking Authority’s garages at 100 W. Main Street, 1 Myriad Gardens, 2 Santa Fe Plaza or 501 W. Sheridan. You probably won’t have to worry about rascally parking attendants taking your wheels out for a joyride like the pair who took off in Cameron’s father’s Ferrari. 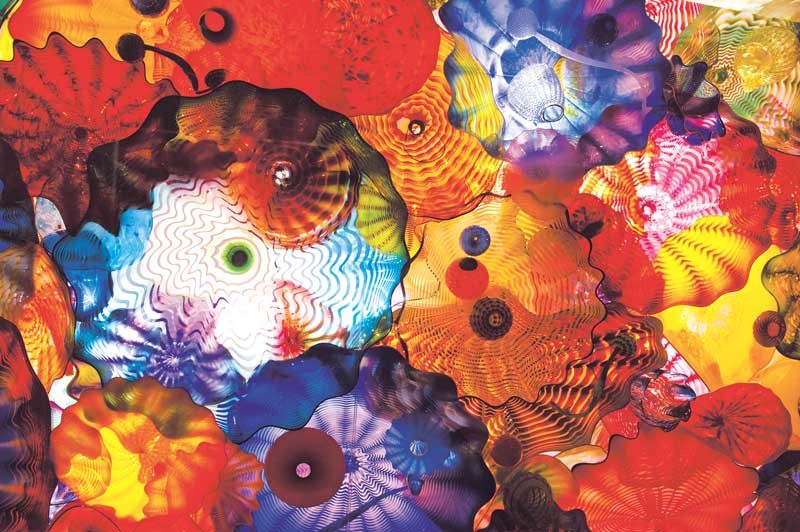 Ferris and friends headed to the top of the Sears Tower, but since they were too young to drink, Vast, atop the Devon Tower, should wait until later in the day. Start where most adults do, with a morning beverage. Elemental Coffee Roasters, 815 N. Hudson Ave., roasts its own beans and has a delicious selection of breakfast items, including biscuit sandwiches, tacos, parfaits and tofu scrambles. In fact, there is something at Elemental for omnivores, vegetarians and vegans.

Oklahoma City Museum of Art (OKCMOA), 415 Couch Drive, opens at 10 a.m. Tuesday through Friday. Ferris took his friends to the Art Institute of Chicago because everyone needs a little culture in their lives. The Dale Chihuly collection is a permanent feature at OKCMOA, and Chihuly’s unique glass creations are absolutely worth your time. Beginning on June 21 and running through mid-September, OKCMOA will host Gods and Heroes: Masterpieces from the École des Beaux-Arts, Paris, a collection of some of Europe’s greatest masters, including Rembrandt, David and Dürer.

The Devon Tower is 50 stories (844 feet) tall, making it roughly half the size of the Willis Tower in Chicago, which, at the time of the movie, was still called the Sears Tower. In addition to the best view of the metro available, Devon Tower’s 49th floor is home to Vast, a fine dining restaurant that serves lunch and dinner.

All hail the sausage king

Lunch at Vast is served daily 11 a.m.-1:30 p.m. The menu is small but impressive and features a good selection of seafood, pasta, salads, steak and chicken. The wine list is one of the best in the metro, with hundreds of choices available. Lunch might be a bit early to drink or split an entire bottle, but Vast has nearly 30 wines by the glass to choose from, including four sparkling choices. You are celebrating, after all. But please pay your bill, and don’t try to charge it to Abe Froman, the sausage king of Chicago, as Ferris did.

Speaking of sausage, Ferris and the gang caught an afternoon baseball game, and you can too. The Oklahoma City RedHawks rarely play an afternoon game, but with most games starting at about 6 p.m. or 7 p.m., you can still see the the team play in the light of day. And who knows? Maybe you’ll be lucky like Ferris and catch a fly ball. Regardless, grab a dog or peanuts, wash them down with an icecold beverage and enjoy a game.

It isn’t Wrigley Field, but Chickasaw Bricktown Ballpark, 2 S. Mickey Mantle Drive, is one of the nicest in the minor leagues. The RedHawks are part of the Houston Astros organization, and improvements to the ballpark this year included additional video monitors, a video wall and a photo booth (near section 107) so you can memorialize your day (and night) out.

Ferris and friends visited the Chicago Stock Exchange. No such exchange exists here, but stop in the lobby at Leadership Square, 211 N. Robinson Ave., and watch stock prices crawl by on boards on both ends of the lobby.

Yet one more thing you are unlikely to find: a parade. The parade containing the well-known “Twist and Shout” and “Danke Schoen” scenes was the Von Steuben Day Parade, an annual event for German-Americans that honors Baron Friedrich Wilhelm von Steuben, a Revolutionary War figure. However, there is another way to honor German-American culture.

TapWerks Ale House, 121 E. Sheridan Ave., has more than 300 beers available, with more than 200 on tap. Many of those beers, like Schneider, Warsteiner, Spaten and others hail from Germany. With darts and pool upstairs and lounges on both floors, there is plenty to do and plenty to drink.

Or perhaps you can take a float down the Bricktown Canal. Take a ride on a water taxi and sing along to any song you like to the delight of those on the shore.

Ferris and friends finished the day swimming, so you will need to leave the downtown/Bricktown area and head for White Water Bay, 3908 W. Reno Ave.

During July, White Water Bay is open until 8 p.m. on Saturdays and 11 p.m. on some Fridays, so you can actually get a swim or slide in before the RedHawks game. It is summer in Oklahoma, and White Water Bay provides an entertaining and relaxing way to get relief from the heat.

The good news here is that after a day of slowing down and enjoying being away from work, you won’t have to outrun parents or principals getting home, and you won’t have to explain to your parents how you totaled an $11 million car.