The 11th annual ZOObrew features Oklahoma beers in one place 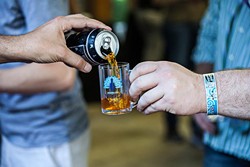 When Oklahoma City Zoological Park and Botanical Garden’s fundraising event ZOObrew began in 2009, it only featured beer from a handful of Oklahoma breweries.

As state laws have allowed for the establishment of more breweries, the Sep. 29 ZOObrew event is one of the best places to find many breweries from all over Oklahoma all in one place.

More than 20 breweries as well as home brewers will be on hand to pour samples of their products among the zoo’s animals.

“I’m excited because there are so many breweries wanting to participate,” Brianne Hinojosa, the zoo’s special events manager, said. “The majority of new [brewers] are local Oklahoma brewers.”

First-time ZOObrew participants include OK Cider Co. and Angry Scotsman Brewing, the latter of which will be on-hand to distribute its brew even though its Oklahoma City beer garden and taproom is not yet open to the public.

“The atmosphere is very relaxed,” Hinojosa said. “It’s like an outdoor bar scene where you can enjoy the sights and music. It’s rain-or-shine, but knock on wood, we haven’t had rain yet.”

ZOObrew tickets are available at zoofriends.org. Pre-brew tickets for $75 allow guests early access 5:30-7 p.m. to try craft beer before it’s gone. Pre-brew guests also receive complimentary food and a T-shirt that sells for $25. Regular tickets are $40-$50 for the main event 7 to 10 p.m. Food will be available for purchase from the zoo’s on-site vendor.

Designated drivers are able to enter both the pre-brew and main section of the event for $5.

“We ask that people drink responsibly, and we are partnering with (ride-sharing app) Lyft,” Hinojosa said.

Net proceeds from the event go to the zoo’s animal enrichment projects, which Hinojosa said includes everything from making new activities in each animal’s habitat to buying them new food.

The zoo will debut its tiger cubs to the public later this fall. The cubs were born and arrived in Oklahoma City in July and can be seen on an online at okczoo.org/tigercam.

The zoo will also debut its newest expansion project, Sanctuary Asia, in 2018. The $22 million project broke ground earlier this year and will be home to red pandas, Asian rhinos, langurs, Komodo dragons and more, while adding an additional 3.5 acres to the elephant herd’s habitat.