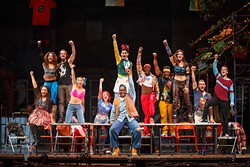 Creator Jonathan Larsen’s modern take on Giacomo Puccini’s La Bohème gained massive acclaim onstage after its opening night, moved to the big screen in 2005 and is now taking its original theatrical form in a new era.

Set in NYC’s pre-gentrified East Village during the height of the HIV/AIDS crisis, the rock musical centers on a group of eight young artists and their complex relationships, tribulations and fleeting successes in a sprawling urban environment.

Many of its sociocultural themes hold even more pertinence in 2017 than they did in 1996, when the musical debuted.

“There are definitely aspects to the show that are specific to 1996,” Rent actor Aaron Alcaraz told Oklahoma Gazette. “Many topics the show covers were controversial back then, and this particular political climate now holds many parallels to Rent’s debut 20 years ago.”

“Even now, in 2017, to see a show with such a diverse cast is still rare,” Alcaraz said. “That’s what makes Rent so relevant in today’s political climate. It includes so many unique voices and perspectives coming together to practice love and acceptance.”

According to Alcaraz, Hamilton’s Lin-Manuel Miranda has stated that without Rent, his recent prolific production could not have happened.

Mortality underlines each character’s motivations and decisions, adding a sense of urgency to the play’s tone. Along with character Roger Davis, Angel suffers from AIDS, a fact cloaking the entire production in a hard-to-digest but inevitable truth.

“The struggle with HIV/AIDS brings a dose of reality to the production,” said Alcaraz. “Rent inspired so many because of its relevancy — not many people had seen this topic dealt with onstage before. It was a very forward-thinking, groundbreaking concept.”

“This is inherently the same show that everyone knows and loves, and it’s a celebration of what Jonathan Larsen accomplished two decades ago,” he said. “The great thing about this production is that 20 years later, we’re bringing it to people who may have never been able to see it on Broadway.”

Those familiar with the play will appreciate the crew behind the scenes as well. Rent’s original creative team joins this year’s tour.

“It has been an absolute treat to work with the same choreographers, costume designers, supervisors and everyone behind the scenes from the original production,” Alcaraz said. “They really bring an authenticity to the show that’s hard to replicate.”

Rent’s themes kept audiences hooked, but so did the play’s employment of what NYC looked like then. Expect ’90s nostalgia with the cast’s vibrant, artistic costumes, a mix of rock ’n’ roll music with acoustic solos and an incredible amount of dancing.

“We utilize the entire stage and beyond in Rent, which means we are constantly moving during each number,” Alcaraz said.

Oklahoma City is just one of over 50 stops on the anniversary tour. For the generally young cast, the experience is an entirely immersive one.

“I was in heels for the first time in my life literally a few days after my audition,” Alcaraz said. “I have learned so much as a young actor doing this tour, and I’m learning how to maintain stamina each night onstage. Our audiences really help keep up energized.”

The song “Finale B” summarizes the importance of staying present around loved ones, but no other song than “Seasons of Love” has stayed with audiences for more than two decades. Alcaraz said when the main cast performs it to open the second act, the love in the theater is undeniable.

“There’s nothing more rewarding than connecting to the audience in each city,” he said.