If a mushroom-Swiss burger sounds ordinary, that’s because you haven’t tried this one. 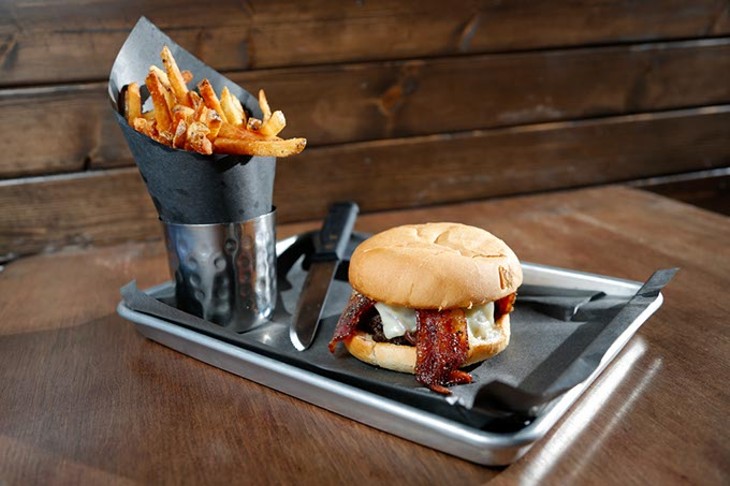 This is Don Elliott’s comeback tour. Usually reserved for bands that got angry at each other and stopped talking until they ran out of money to fuel their private jets, this comeback performance won’t cost $85 just to leave a bland taste in your mouth.

Instead, Elliott is the man who brought crowd-pleasing hits like Outback Steakhouse and Chili’s to Oklahoma. But that wasn’t his dream.

“I never wanted to be the corporate guy,” he said. “I don’t want that to be my legacy.”

Which might explain what he’s doing at Five Star Grille, 1920 S. Meridian Ave.

Visitors will be forgiven for thinking they’ve stepped into a new chain restaurant, though this is its only location. Yes, the menu design is slick and to-the-point. Yes, the dining room is clean. Yes, the kitchen is open. Yes, the wait staff is eager to please and knowledgeable about the food.

And it’s the food that sets it apart.

The burgers are made with fresh Oklahoma beef — a fact proudly proclaimed on the menu — because competition for hamburger dollars in OKC is fierce. Luckily, Five Star Grille has a seasoned chef in the kitchen who does the seasoning with his own proprietary blend. A Hobart native, executive chef Jon Pope trained at the famous Le Cordon Bleu culinary arts school, and it shows in the way he elevates comfort foods from common to unconventional.

Stacked on a fresh, locally made La Baguette bun, The Allman Brothers ($7.25) is Elliott’s favorite burger. Cooked to order, it comes topped with sautéed mushrooms, onions, bacon and Swiss cheese.

If a mushroom-Swiss burger sounds ordinary, that’s because you haven’t tried this one. The mushrooms aren’t fresh from a can or shoved on raw. Instead, they’ve been cooked to a magical tenderness, nearly becoming one with the ground rib eye patty. The result is an explosion of the beefy, umami flavor that makes hamburgers so appealing.

Given Elliott’s love of The Allman Brothers Band, which he met and befriended in 1992, it’s little wonder he named his favorite dish after it. Its influence is also on the walls, as the decor is largely the work of Kirk West, a photographer who also was The Allman Brothers Band’s tour manager. Gorgeous, giant, black-and-white photos cover a 40-year history of American rock ’n’ roll.

The menu is as much an ode to music as it is to food. The Green-Eyed Lady Cheese Fries ($7.99) are enough to feed a band and maybe a little more. Fresh-cut fries are doused in a creamy queso blanco sauce and striped with roasted poblano peppers with a dollop of sour cream and chopped green onions on top. It’s messy, but it’s good messy.

If that doesn’t slake your hunger, ask for the (off-menu) brisket nachos. Rather than tortilla chips, this dish uses fresh potato chips, roasted jalapeños, queso blanco and a heap of slow-cooked brisket.

Elliott was especially proud of the restaurant’s salads, which caught the eye of the large construction worker contingent in the dining room. 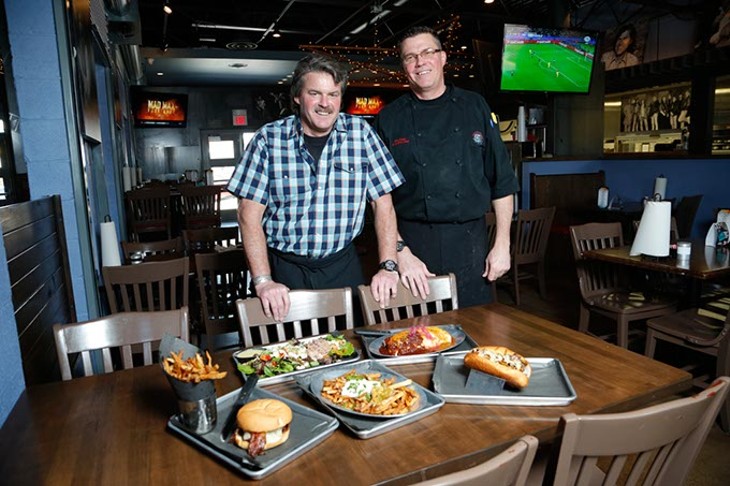 “One guy got a salad, and the others just looked at it,” he said. “The next time, they all got salads.”

That’s not surprising given the flavorful concoction that makes up Heard It Through The Grapevine ($8.99), a giant pile of mixed greens, carrots, bell peppers, raisins, sun-dried tomatoes, feta and a mango vinaigrette. For $4 extra, the kitchen lays a beautiful, peppery, pan-seared tuna filet on top.

For the Classic Philly ($8.99), Elliott and Pope went to Hobby’s Hoagies for inspiration. As they chowed down on their competition’s sandwich, replete with a crushed cherry pepper sauce, Elliott asked Pope, “Can you make one better?”

The proof is in the bun, where a mélange of seasoned, shaved rib eye and caramelized onions mixes with queso blanco and the chef’s own hot pepper relish.

No item on the menu tops $10, though a few skirt close at $9.99. The reason is one Elliott learned in his corporate days.

“You don’t want to become a special occasion restaurant,” he said. “I want a place with great food where you can afford to bring your family for dinner without breaking the bank.”

Margins are thinner that way, but he’s confident that good food at reasonable prices will keep customers coming back.

And if that doesn’t do it, he believes that live music on Wednesdays, Fridays and Saturdays and a full bar with local beers will.

On this comeback tour, Elliott is happy to wade into the crowd. It’s not uncommon to see him in the dining room, shaking hands and making sure the food is up to customers’ expectations.

With the menu rocking and the audience pouring in, this isn’t Elliott’s encore. In fact, it might just end up being his greatest hit.