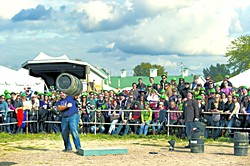 Some people relax in bars and watch World’s Strongest Man competitions on cable with friends while thinking, “I could totally toss a keg farther than them,” but they never had a chance to prove it. Here’s that chance.

A new athletic competition featuring events such as a log saw and a hatchet throw is coming to Oklahoma City. The Alpha Challenges start 9 a.m. Saturday at Douglass Park, 401 N. Bryant Ave., where participants can compete in 14 events that challenge their speed, strength, agility and mental stamina. Designed as a “decathlon for the everyman,” The Alpha Challenges is a first-of-its-kind event, said organizer James Speegle.

“Nothing like this exists, which is kind of why we’re doing it,” said Speegle, who also owns the local WAKA Kickball & Social Sports franchise. “I searched the Internet high and low, and nothing like this existed. We wanted to do something that was a mix between World’s Strongest Man, lumberjack challenge and track and field events.”

The event lineup includes archery, a 100-yard dash, a long jump, a logic problem, a rock wall climb, a net climb, a log saw, a javelin throw, a memory game, a rope climb, a hatchet throw, a tire flip, a shooting gallery and a keg toss, Speegle said. Each event is worth the same amount of points, so if someone’s good at one thing but not another, they’re still in the game. At the end of the competition, the man and woman with the most points will be crowned Alpha Male and Alpha Female and receive cash prizes. Other top finishers will also receive prizes.

“We wanted something that everybody could do but still would set the winners apart as being the most well-rounded,” Speegle said.

Participants also will receive a complimentary beer (to be enjoyed after the competition), a T-shirt and a swag bag. Competitions will be held in waves, which start at 9 a.m., 11 a.m., 1 p.m. and 3 p.m. It takes about 90 minutes to complete all the events. Participants must be at least 18 years old.

While everyone competes for the grand prize, players can create custom online scoreboards and compete against friends, personalizing the competition, Speegle said.

Another Oklahoma City Alpha Challenges event is scheduled for April, and if the concept takes off, Speegle said he plans to take the show on the road, hosting events in cities like Dallas, Denver and San Francisco.

Registration is $49.95, and spectator tickets are $10. Admission for guests under 18 years old is free. Speegle said registration is open until event day.