The American Indian Cultural Center and Museum’s second chance is cemented with an agreement reached by Oklahoma City, the state and the Chickasaw Nation. 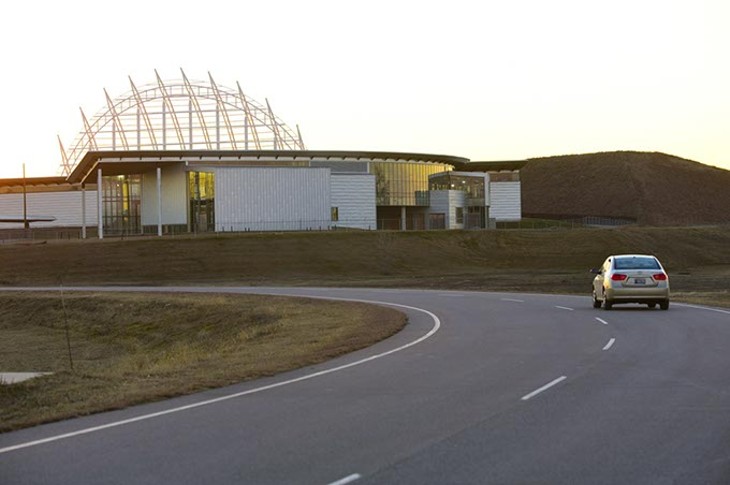 Significant milestones haven’t come along often in the quest to complete The American Indian Cultural Center and Museum. After extensive negotiations among the State of Oklahoma, the City of Oklahoma City and the Chickasaw Nation over the past year, construction is set to begin once again.

First proposed in the 1980s by state lawmakers as a way to draw tourism into the state, it wasn’t until 1994 that legislation paved the way for the construction and operation of the American Indian Cultural Center and Museum (AICCM). While state lawmakers tasked themselves with raising the funds, the newly created state agency, the Native American Cultural and Educational Authority, was charged with developing the center. Twelve years later, following City of Oklahoma City leaders deeding 60 acres along Interstate 40 for the project, construction began. In 2012, construction crews suspended their work when funds were exhausted.

While lawmakers debated how to complete the project, travelers along Interstate 40 saw an unfinished museum with the potential to showcase the history and culture of the 39 tribes of Oklahoma. Additionally, state lawmakers had issued $63 million in bonds toward the museum’s construction.

Eighteen months ago, Oklahoma City Council entered into an initial agreement with the Chickasaw Nation to complete and operate the AICCM. The partnership between the tribe and the city fulfilled the requirements of state legislation proposed by former House Speaker Jeff Hickman and signed by the governor that granted the city authority to operate the museum. The city leaders were on the brink of rejecting involvement with the museum when the Chickasaw Nation offered its help both in finances and museum operations.

“The Chickasaw Nation has long been a strong supporter of the American Indian Cultural Center and Museum,” Bill Lance, tribe commerce secretary, said in an email to Oklahoma Gazette in December 2015. “As an investor, operator and owner in a variety of diverse businesses, we are pleased to offer to invest in the AICCM for the benefit of the city, the state and the Chickasaw Nation.”

The future of AICCM was sealed last week when the council approved agreements and a number of measures allowing construction to begin once again.

“I am confident that this project would not be moving forward and have a path to success if it wasn’t for the involvement of the Chickasaw Nation at this point in time,” City Manager Jim Couch told the nine-member council before the unanimous vote.

To complete the AICCM, leaders are looking at a $65 million price tag. Back in 2012, the city pledged $9 million to the project, which it plans to contribute to the next round of construction. Additionally, the state committed an additional $25 million in bonds when it passed the legislation initially granting the project to the city. Private contributions add the rest at $31 million.

Agreements signed by state, city and tribal leaders last week authorize all parties authority in reviewing and participating in the construction process. It is estimated that construction will take 36 months and the museum could set an opening date during the spring of 2021.

One of the parties included in the agreement is AICCM Land Development, LLC, an entity created by the Chickasaw Nation for developing the commercial land around the museum.

In 2015, when the tribe approached the city to partner on the museum, the tribe offered to cover construction costs that exceed $65 million and provide museum operations costs of $2 million annually for seven years. In exchange, the city would allow the tribe to commercially develop the museum’s surrounding properties along the Oklahoma River near S. Eastern Avenue.

The American Indian Cultural Center Foundation will provide museum operations under contract with the Oklahoma City Economic Development Trust. The foundation recently hired James Pepper Henry, who previously served as executive director of Tulsa’s Gilcrease Museum, as its executive officer and director of the museum.

When the 125,000 square-foot AICCM opens, visitors can expect to learn about the state’s 39 federally recognized tribes through history, language, arts, dance, music, literature, crafts and native traditions. Since the museum’s initial creation, leaders have touted the future exhibits as Smithsonian-quality and emphasized the museum would attract state residents as well as visitors from out of state. In addition to exhibits, the center will be home to a gift shop, a cafe, meeting rooms and spaces for private ceremonies and the cultural park.

Print Headline: Step closer: The American Indian Cultural Center and Museum’s second chance is cemented with an agreement reached by Oklahoma City, the state and the Chickasaw Nation.