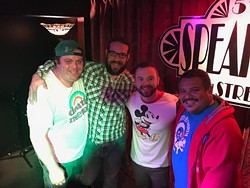 Despite likely protests from “pull my finger” uncles across the metro area, a true “funniest person in Oklahoma City” will be crowned this weekend.

Eight local comics will deliver their best 10-minute stand-up sets for the title in the championship round of OKC Comedy’s third annual Funniest Person in Oklahoma City competition. The fun begins 8 p.m. Saturday at ACM@UCO Performance Lab, 329 E. Sheridan Ave., and the public is invited to attend. Admission is $15-$18.

OKC Comedy, the city’s most prominent comedy booking and production company, launched its funniest person competition series in 2015. Co-founder BradChad Porter said any comedy market that wants to be taken seriously on a national level should have its own annual championship event.

In the preliminary rounds, comics are given five minutes to perform. The best 16 scores are advanced to the semifinal round, with two additional invites going to the comics who brought the most fans and supporters to their preliminary set.

Comics are given seven minutes in the semifinals with the top eight scores advancing to the final round.

OKC Comedy’s founders Porter, Spencer Hicks and Cameron Buchholtz are among the city’s most prominent performers, but all three exclude themselves from competition. Last year’s winner was Zach Smith, a local comedy scene veteran who Porter said has been doing standup for around eight years.

The event’s first year produced a surprise winner in CJ Lance, who at the time had only been practicing stand-up for a few years.

Porter said in the past it has been interesting to see how judges react to comics when they’re removed from the context of the city’s larger scene.

“The comics are getting the opinion of an outside voice,” he said. “It’s a voice that hasn’t seen their act or seen their act compared to anyone else’s act.”

Porter said while the nature of comedy makes comics somewhat competitive, they are not competitive to the point of not being friendly.

Through the competition’s semifinal stage, many eliminated comedians showed up to support their friends and out of general curiosity.

“That doesn’t happen a ton,” Porter said. “In the scene in general, you don’t see a lot of comics showing up for a showcase that they’re not on unless they just happen to be free. It doesn’t happen in large numbers.”

Porter said since the inaugural year, he has noticed an exponential quality increase in the competition’s semifinal stage — particularly the two-night qualifying round earlier this month.

“Those were two really great comedy shows,” he said. “Take the contest out of it, those were really, really good comedy shows. I would pay to see those shows.”

Ideally, OKC Comedy would like the Funniest Person in OKC title to become a comic’s stepladder to getting booked for other opportunities around the country. Porter said what the competition has shown is that the local comedy scene doesn’t have any concrete tiers of talent.

People get funnier and become less funny. “Funniest” is a title that must be both earned and maintained.