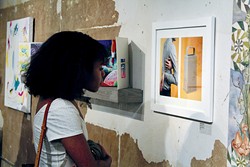 The annual event is still days away from its premiere, but Momentum 2018 already set a gold standard.

Krystle Brewer, OVAC’s executive director, said the event began nearly two decades ago to serve student and young artists. It has since grown into one of the city’s most anticipated annual exhibitions each year.

“It’s become this prestigious art exhibition when initially, it was meant to be a much more pop-up, grassroots kind of thing,” Brewer said.

“It was a lot more competitive this year,” Smith said. “We had 196 artists apply. That was close to 600 individual pieces that our curators had to sort through. Narrowing it down to 76 was very, very competitive.”

A few Momentum artists will come away with one of several cash prizes totaling $1,000, including a viewers’ choice prize for which each guest can vote.

Part of the reason Momentum has gained such local popularity is that it’s as much of an experience as it is an art show. Guests can enjoy music from DJ and producer Samuel Reagan and synthpop band Haniwa during Friday’s event while experimental ukulele looper Jarvix and hip-hop group Original Flow and The Fervent Route perform Saturday. Food trucks will be parked outside on both nights. Guests can win prizes in a variety of raffles, including a new golden egg raffle that guarantees players at least a $30 prize for a $20 mystery egg.

This year, Momentum’s planning committee is working on introducing an interactive and immersive art installation partly inspired by the popular Factory Obscura installation Shift, which recently closed at Current Studio. Brewer said their installation is still in its planning stages, but she is excited about the project’s potential.

“It’s one of those things where you have a bunch of artists working together and you’re kind of holding your breath like, ‘What is this thing going to look like?’” Brewer said.

Momentum’s Gold Dome arrival presents a rare opportunity for most guests to see inside the OKC landmark. Most of the show’s participating artists have likely never been inside the space, as its main floor has not been open to the public for most of the last three decades.

The building was first constructed in 1958 as a Citizens State Bank. Most recently, plans for a Natural Grocers to move into the space were abandoned. The Prohibition Room restaurant and lounge was open for a few years in the building’s north-facing lobby but closed in 2011.

Smith said the wide-open space is ideal for Momentum’s needs. The show will only occupy the Gold Dome’s first floor. Temporary gallery walls will be brought in.

“[The building] is very round,” Smith said. “There are circles everywhere, even on the floor.”

In some past years, finding enough parking to support Momentum’s crowd of visitors has been a challenge. The Gold Dome, however, includes a parking lot onsite.

“When we got Gold Dome and they had their own parking lot, it was like, ‘Oh, awesome!’” Smith said. “We haven’t had that recently.”

Momentum changes sites every year to spotlight a new area of the city. Brewer said she hopes the surge of attention will be a good thing for the Gold Dome and its future.

“One excellent outcome,” she said, “would be that it draws people to the space and people can see the potential of the space and it would draw attention from potential tenants.”

Raglin was thrilled when it became clear that her turn as a Momentum spotlight artist would come inside the historic Gold Dome.

“Oh man was I geeking out because I’m a huge fan,” she said. “From an architectural standpoint, it was one of like four geodesic domes [when it was built], and we had it here in the city. For the doors to be open for us and [for guests] to see something like that, I think from the location alone people are going to freak out and they’ll just have to come and see it.”

In addition to her status as a spotlight artist, Raglin is also chairing this year’s Momentum committee.

“I decided to say yes to everything,” she said with a laugh.

Raglin’s first experience as a Momentum artist was in 2015. She said it was very helpful in her progression as an artist, showing her the proper way to exhibit and promote her own work.

“Once I showed there, I continued to have success in other galleries and group show invitations,” she said. “As far as what Momentum did for me, it was very much a springboard effect.”

For many of Momentum’s participants, there is a big learning curve for a major gallery exhibition. Brewer said Momentum does not hold any artist’s hand through the process, but they are very patient and instructive in the process of getting all the artists’ exhibits ready.

Before each year’s show, OVAC hosts a workshop for Momentum artists that shows them basics like how to wire their own work and the best way to photograph one’s art.

“You don’t necessarily know how to take professional photos of your work or what to do with your artist statement,” Brewer said.

Another reason people go to Momentum is to check out the art talent of tomorrow. Several big local art names, including Dylan and Amanda Bradway, have passed through Momentum in its 17-year run. Brewer said it is also a great opportunity to purchase art.

“I feel like a lot of people who are trying to build or start an art collection will go to Momentum specifically to pick out works to buy because they tend to be on the lower end [in price],” she said. “These are artists who are just beginning their careers.”

Brewer said the quality of young art talent in the state is impressive, which is evident in the fierce competition for Momentum selection each year. The executive director gives credit to the state’s strong arts institutions that give young artists a framework for success.

“I think part of that goes to having strong art programs around the state,” she said. “The artists that are submitting to Momentum, it’s through the encouragement of their professors and the community.”