It’s a little weird that the first thing most people tell me about The Barrel, Oklahoma City’s new British pub concept in the shell that used to be Cafe Nova, is that the spicy ketchup is really good.

And it’s also a little weird that I totally agree. Isn’t it just Tabasco sauce in ketchup? I don’t even know. I just love it.

Honestly, the early word on The Barrel, 4308 N. Western Ave., was not great. When I asked for opinions, most of my friends used some variation of the word “meh.” And that’s somewhat funny, because that’s how people used to talk about Nova, too.

Is there something in the walls? No! Or at least I don’t think so. I’ve eaten there several times since it opened and discovered several immensely enjoyable dishes.

The fish and chips ($10), only available on the dinner menu, are made with a classic beer-battered cod.

You get four big chunks of fish, hot and crisp, with a big cluster of Barrel fries. The fish itself is tender and moist and flakes apart easily as you bite into it.

Whether you dip it into the tartar sauce or drizzle malt vinegar on it, it’s a darn palatable plate of food.

The fries could stand alone. Order a batch to snack on while nursing a few beers from the fairly extensive menu. And the spicy ketchup … Look, just get it.

There are other sides ($5 each) worth trying, too. The Pub Mac-n-Cheese mixes penne pasta, creamy cheese sauce and mushrooms with shreds of its namesake on top. It’s not so rich that you can’t eat it all, but it probably wouldn’t hurt to share.

Here’s what roasting does: It makes vegetables edible. A little oil, a little seasoning and the high heat of an oven will activate the inherent sweetness hidden in even the most terrible vegetables. Broccoli, cauliflower and even Brussels sprouts are better with an oven-char on them. The Barrel’s version, sadly, was lacking that color. This time, the heat didn’t deliver the flavor I was hoping for. A pinch more seasoning or perhaps a splash of a bright vinegar would help. 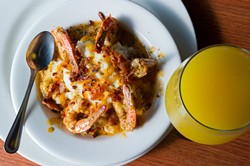 Most of the folks I talked to tried the Barrel Burger ($8), so I tried it, too. The sirloin patty certainly is filling and cooked to order, but its golden crown of rich, melted, smoked cheddar cheese makes this menu item king. The pretzel bun, crisp on the outside and chewy on the inside, is a distinctive touch, too, as it holds up to the juicy ingredients without tearing or becoming soggy.

(Vegetarians and vegans be aware: There’s a Vegan Burger for $7, as well.)

If you make it in for brunch on Saturday or Sunday morning, I recommend the shrimp and grits ($10). This is a holdover from the old Cafe Nova brunch that I sorely missed. The grits are creamy and infused with cheese. The shrimp is substantial and cooked well. Drizzled over the top of it all, The Barrel’s creole sauce serves a hint of heat. I added a poached egg ($2) because I will always add a poached egg, but I think the dish is plenty satisfying without it.

For dessert, the very funny — though traditionally named — spotted dick ($7) is an oddity with a texture similar to pudding, and it’s laced with dried fruit. I found the flavor reminiscent of Fig Newtons.

I know some folks haven’t loved The Barrel, but my experiences were pleasant. Indeed, I found the wait staff helpful and the menu full of tasty options.

What works: Hot fish and chips and a nice brunch menu. What needs work: Attention to detail, especially on the Brussels sprouts. Tip: Check out hours of operation and menus. Not everything is available all the time.