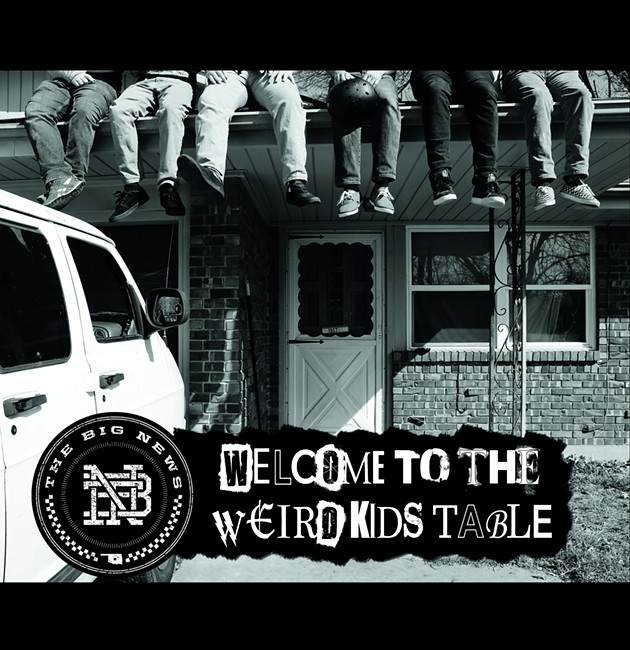 The Big News facetiously mourns the death of rock ’n’ roll on its song “Stuck in ’96.”

The Norman-based ska punk band certainly sounds something like a throwback to Reel Big Fish, The Mighty Mighty Bosstones and other bands from ska’s third wave, but there is a sense of freshness to its new album Welcome to the Weird Kids Table, released in May.

Perhaps it is the vaguely political and social themes some songs touch on or the lively lead vocals from guitarist Jacob Niceley that give the album fresh life. While the sax-flavored guitar jam aesthetic will be nostalgic for fans that have not revisited the jazz-reggae-punk fusion genre since the 1990s, there is no sense that the band is treading others’ water.

Weird Kids Table opens with “I Don’t Care,” a relatable, carefree anthem that might best epitomize the project’s overall theme, which is to be one’s self and live free. The upbeat tune is, in fact, so infectious, with a chorus so catchy, that it would not be much of a stretch to envision it being used to sell insurance on a television commercial.

Party single “Kingston Weekend” follows the intro track. The vibe is an ideal fit for the listener’s next Saturday barbecue turned late-night goof session with friends. A ripping guitar solo in the song’s second half gives special life to the jam.

As energetically as the album opens, Weird Kids Table hits its stride near the middle as it slows the tempo and lets the horn section shine.

“Trambo” stands out for its comparative grit. A pulsing drum rhythm breaks into a steady, trumpet-driven groove. Niceley does something different with his vocal delivery in this song. There is a hint of weariness present as he ponders the inevitable crumbling of certain societal and social systems. “Trambo” is just one instance in which the band gives listeners some thought-worthy lyrical substance on the album.

Likewise, “Houdini” shines on the album’s slower mid-section. Lyrics reminiscing on the value of old, departed friends should resonate for a wide range of listeners.

Weird Kids Table concludes with “Trumpa Dump,” which is both political and introspective with a meaning that might take a few listens to truly divine. Niceley rails against capitalism and the economic system that keeps so many trapped in jobs or situations that they do not enjoy but must maintain just to get by.

The song is effective and fits the album’s encompassing rogue theme. For a project with an overall fun and easy listen, it is good to close out on a song with some weight.

It is hard to picture fans of ska and ska punk’s most recent golden era not enjoying Weird Kids Table. But this album should appeal to an even broader base. There are no weak links on this 30-minute tracklist.

If it seems hard to find a comfortable seat at music’s summer buffet, The Big News is here to show you that it really can be more fun at the Kids Table.