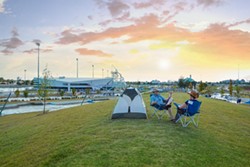 The 1988 movie The Great Outdoors stars John Candy and Dan Aykroyd as two feuding brothers-in-law leading their families on a disastrous wilderness getaway. Bad weather, leeches, sarcastic raccoons and a rampaging bald-headed bear make the outdoors seem not so great at all.

Scheduled to screen at Riversport Adventures as a Floating Film projected above Riversport Rapids, The Great Outdoors will show viewers there for the park’s Urban Camping adventure a few examples of the kind of difficulties they might avoid by choosing to pitch their tents in the city.

“A lot of people have gone camping at the lake or the national park, that sort of thing,” said Elizabeth Laurent, senior director of marketing and sales at Oklahoma City Boathouse Foundation, which supports the facilities and programs along the Oklahoma River, including Riversport Adventure. “But this is a quick, fun, easy thing to do outdoors with your family.”

The camping events are scheduled for Oct. 7 and 14, but only the later date will include the screening, co-sponsored by YMCA of Greater Oklahoma City. The events are part of the Boathouse District’s Outdoor October, which also includes the Oklahoma Regatta Festival and USA Rowing World Challenge.

“It’s a great opportunity for people to come out and do these urban adventures when the weather’s great and the leaves are turning colors,” Laurent said. 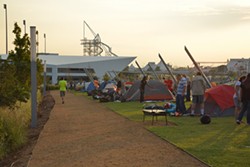 For a $10 fee per tent, campers don’t have to leave the city to sleep out under the stars. For $79, campers get a two-day pass allowing them access to Riversport’s aquatic activities, which include whitewater rafting, water slides and flatwater kayaking. Though campers can bring their own food, they can choose to eat at the park’s Big Water Grill, which offers a varied menu. And, unlike most traditional campers, they’ll have access to indoor restrooms.

Though campers will not be allowed to build campfires, the park will be burning one on its own. Pets are allowed, but outside alcohol is not. Tents may be pitched from 7 p.m. until 8 a.m. the following morning, when they have to be taken down. The park closes at 5 p.m. but Big Water Grill stays open until 10:30 p.m. Registration to set up a tent ends at 7 p.m.

“For people who have never been camping before and they don’t have all the gear and they don’t want to drive out to a national park but they’re kind of interested in doing it, it’s a great way to get into it without having to invest a lot of your own time and energy into figuring out the logistics,” Laurent said.

She said previous Urban Camping events have been popular with families with children and one campout included more than 130 Boy Scouts, who were able to stay close to home. Purchasing the park pass also grants campers access to zip lines and the 80-foot-tall SandRidge Sky Trail adventure course and includes attractions for younger adventurers. Other activities, such as tug-of-war, are also scheduled for campers.

print headline: In tent city, The Boathouse District makes roughing it a little smoother with its Urban Camping Adventure.