The Bourgeois returns with a prolific July 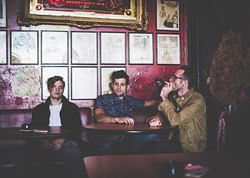 The Tulsa-based alternative rock act recently found time to speak with Oklahoma Gazette in what has become a hectic July. Its new four-track EP, Designer Genes, is due for a Friday release. The band has put out three singles from the project within the last month.

The Gazette caught vocalist-guitarist Zach Mobley and drummer Ty Clark between preparing for a last-minute gig opening for Eagles of Death Metal at Tulsa’s Cain’s Ballroom and working on a music video for The Bourgeois single “The Summer of George.”

“We’re huge Seinfeld fans,” Mobley said. “The song’s not really about that [episode], but the song’s about similar feelings.”

In “The Summer of George” episode, Costanza, recently fired from his job with the New York Yankees, revels in knowing his severance package should last him several months. He makes big plans for his jobless summer, but instead of being active and going out into the world, he becomes a hermit, too lazy to even make his regular visit to Jerry Seinfeld’s apartment.

“We definitely, as a band, have had some summers that were kind of like that,” Mobley said. “We’ve had some grandiose plans and then that stuff doesn’t come together.”

This summer isn’t one of those.

“Designer Genes,” the EP’s title track and lead single, doesn’t have an edge; it is the edge. The guitar work is hard and abrasive. There’s an undercurrent of contempt in Mobley’s voice when he rhetorically says, “Tell me what it’s like to have designer genes.”

The title is an obvious riff on the homonym “designer jeans” and is a grimacing affront to arrogance, stuck-ups and privilege.

“To me, the song’s about people who kind of have this air about them,” Clark said. “They feel superior to you in every way, including genetically.”

The Bourgeois is often at its best when it is at its most aggressive.

The band has released singles but hasn’t released a full-scale project in two years.

Mobley and Clark said the band wasn’t stagnant — far from it. The Bourgeois was retooling. The group spent a lot of time playing live shows and writing new material.

Both musicians said they were pleased with the response to 2014’s full-length release We’re Still in the Gutter, But Some of Us Are Looking at the Stars, but they were mostly happy anyone paid attention at all.

“Obviously, it’d be great if it was blowing up and we were selling out arenas, but at the same time, we’re just going to write the best songs that we can,” Clark said. “We’re making steady progress along the way, and that’s good enough for us for now.”

Mobley said another important development in the last two years was securing what feels like its true roster of players. In addition to Mobley and Clark, The Bourgeois also features bassist Vance Young.

“It’s big just to have our lineup finalized,” Mobley said. “And I think we’ve finally figured out our sound. I think the first couple of years of any band is going to be trying to figure out what your sound is. I think we have a pretty good idea of it now.”

The group has more than one project lined up.

“We already have the [full-length] follow-up [to Designer Genes],” Mobley said. “It’s done; we’ve finished it. We’re going to kind of see what’s up and we’ll weigh our options.”

He said the follow-up album should come out sometime next year.

A lot of what is next will be determined by where the new EP takes the band. An Oklahoma City release show is Friday at Blue Note Lounge, 2408 N. Robinson Ave. A Designer Genes tour hits the road sometime this fall. The grind of touring, Mobley said, is often where things seem to develop.

“You just have to be willing to accept it,” Mobley said. “You just have to make sure you’re not in an uncomfortable position 23 hours of the day to do your 30-minute thing on a stage at night, but when you’re playing your show, it’s worth it.”

Band members work to hone their craft, in part for their audience and certainly for their own sanity.

Opening for Eagles of Death Metal in front of a sold-out audience or performing to an empty room, Mobley feels confident in the music and, therefore, compelled to create bigger, better works.

“This is what we love to do,” he said. “It’s great that people are interested. Even if people weren’t interested, this is still probably what I’d be doing. It’s great to be in a band where we’re actually making progress and people are actually interested in us.”

Print headline: Summer restoration, The Bourgeois breaks up a common summer with its first new project since 2014.

The Bourgeois with Turbo Wizard and The Shutdown Shutouts