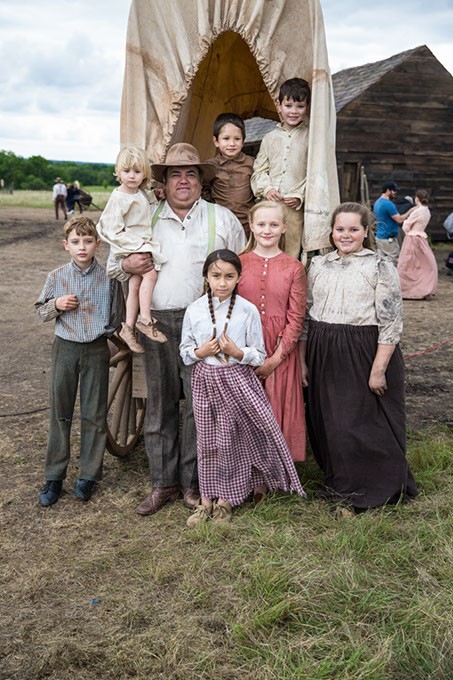 Checking an alert on his cell phone, movie producer Paul Sirmons could identify with the protagonist of the bio-pic he was filming: a cattle rancher born in 1843.

“We were shooting one day on Chigley [Sandy] Creek,” Sirmons recalled, “and my phone beeped, and I looked and it was the National Weather Service saying there is a flash flood advisory for Chigley [Sandy] Creek. So I go ‘OK, everybody out,’ and literally a couple of hours later, that creek was flooding its banks. So we lost probably two and a half days to the weather, but I told the crew, ‘Montford Johnson lived through this. … This is what he had to live through.”

Johnson, the subject of The Chickasaw Rancher, carved out a cattle empire along central Oklahoma’s Chisholm Trail in the years before statehood, persevering through not only Tornado Alley’s famous meteorological mood swings but as the orphaned child of a white man and a Chickasaw woman amid the precarious race relations of mid-19th-century Indian Territory.

“Montford Johnson’s story is one where he basically rose from nothing,” Sirmons said. “It’s kind of a rags-to-riches story, overcoming the elements, overcoming the prejudices of the time. During the 1860s, it’s the Civil War time, so there’s a certain overt racism going on. He was also caught, as the Chickasaw Nation was. They had been removed from their homelands 40 to 50 years earlier, and they were placed between the white man and the soldiers and the Western tribes, which were the tribes that followed the buffalo for their food. The soldiers were killing off the buffalo so there would be no food, creating a tremendous amount of tension and hardships for those tribes.”

The Chickasaw Rancher is the third feature in a film series by Chickasaw Nation Productions exploring the heritage and history of the Chickasaw people. The film, directed by Nathan Frankowski and starring Martin Sensmeier (Red Harvest in the recent remake of The Magnificent Seven), wrapped principal photography recently in locations in Oklahoma and Florida, but content producer Jeannie Barbour said research for the script began more than two years ago, when she began “diving into archives” from Oklahoma History Center and the University of Oklahoma’s Western History Collections and interviewing Johnson’s surviving descendants.

“This was a vision that [Chickasaw Nation] Gov. Bill Anoatubby had,” Barbour said. “He has always wanted to illustrate how important Chickasaw people have been in shaping American history and culture. Montford Johnson is a person in Oklahoma history that not many people know about, but who really played a lead role in developing the ranching industry during the 19th century. …  He was spread out over many, many miles, many, many acres. … The northern border would’ve been up there near MacArthur and 10th Street in Oklahoma City and the southern border down near the Davis area on the Washita River. He went as far west as Hydro and as far east as Pottawatomie country.”

Another source of information for The Chickasaw Rancher was a book by the same name, first published by Johnson’s grandson in 1960 and then revised and republished in 2001.

“It was like a diary,” Sirmons said, “and it was not easy to turn it into a screenplay because it wasn’t written like a dramatic tale.”

But Johnson, left by his father as a child with the Chickasaw relatives on his mother’s side after her death, proved a compelling character who could propel a film.

“A movie is always about a person,” said Sirmons, who also served as producer on Chickasaw Nation’s previous film, Te Ata. “You can do a Western and say, ‘Oh it’s a Western,’ but it’s not about the cows and it’s not about the stampedes … it’s about people.”

Johnson rose from early hardship as an abandoned child to establish a ranching empire in a highly contested area with the help and guidance of his friend, famous trail scout Jesse Chisholm (portrayed in the film by Eddie Easterling).

“Montford Johnson happened to be somebody that got along with everyone kind of,” Sirmons said.

Because of an agreement Johnson made with tribes in the area, Barbour said, the rancher, who died in 1896, primarily hired African-American and Native American cowboys to herd cattle.

“The African-American cowboy, we don’t hear their story very much,” Barbour said, “and it’s a big part of Oklahoma history.”

The Cheyenne and Arapaho also play key roles in the film.

“Because Montford’s life was so intricately associated with those tribes, you can’t really tell his life without also talking about what was going on with those tribes during the same time period,” Barbour said. “We know that many of the Plains Indian tribal people during this time were rounded up and sent to Florida.”

The film includes scenes shot on location at Fort Marion, Florida, where 72 Native Americans were imprisoned without trial in 1875.

“[Filmmakers consulted with Cheyenne and Arapaho representatives] over the course of a year about language and clothing and certain customs,” Barbour said.

In addition to the historic location in Florida (where Sirmons previously served as the state’s Commissioner of Film and Entertainment), the film’s local locations also include the Chickasaw Ranch near the Arbuckle Mountains, where some of Johnson’s many cattle once grazed.

“It definitely has an Oklahoma look and feel to it,” Barbour said. “The footage I’ve seen so far is absolutely gorgeous — big Oklahoma skies. … We feel like visually we were able to capture some beautiful scenery that showcases the state of Oklahoma, possibly what it might have looked like during Indian Territory days. … We feel like we captured the weather as well.”

Sirmons agreed, pointing out that Florida’s severe weather warnings (usually for hurricanes instead of tornados) typically come with earlier notice.

“I see them as partners, the Chickasaw Nation,” Sofsky said. “They care.”

Sirmons said Chickasaw representatives told him, “If you make the film that we want to tell and it only plays in our own theaters on our own property, we’re OK with that. It’s more important to us that the story be told right, that it be told honestly and it reflect the heart and the spirit of the Chickasaw people.”

He estimates that at least 200 Chickasaw worked on the film as actors and extras and crew, and he hopes future films will feature even more.

“My dream is that in a few years, that they won’t need me, that the Chickasaw people will make their own films and make them their own way,” he said.