When Oklahoma City’s downtown and nearby districts began to see economic revival, the city teamed with struggling neighborhoods to revive their areas. 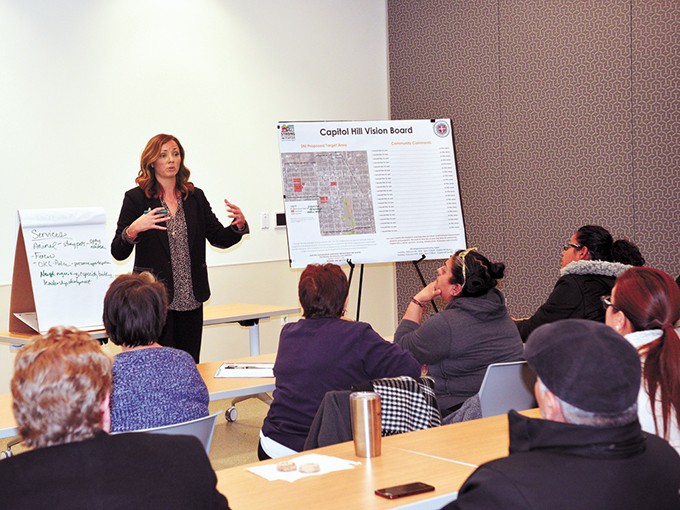 There once was a tale of two cities in Oklahoma City, a tug of war between declining urban areas and booming suburbs. All that began to change a few decades ago when citizens backed plans for capital infrastructure projects that ushered in a resurgent downtown core.

Yet outside downtown and its neighboring commercial areas and historic preservation districts, there was no renaissance story. Urban neighborhoods struggled from the aftereffects of urban sprawl. It was easy to spot boarded-up doors and windows on homes, collapsed garages and porches, cracked sidewalks and more, all clouds of embarrassment for longtime residents and city leaders.

“We look at everything on the block from the sidewalks and the streetscapes to the trees and the homes,” explained Shannon Entz, the lead planner overseeing the SNI program. “We look at it all to see how best we can make an impact. We find partners and we implement projects. We hope that it starts a momentum.”

By “we,” Entz means SNI neighborhoods’ neighbors, who have a say in determining and developing the strategies for making their communities stronger and safer. Since SNI began, $3 million in public dollars has brought $18 million in private investment to the three neighborhoods, Entz said.

Around City Hall, SNI is celebrated as a huge success. Reports from the three neighborhoods show home values have risen. The number of reported crimes has fallen in two of the neighborhoods: Classen Ten Penn and Culbertson’s East Highland.

In the neighborhoods, the outcomes are visible with families and children strolling the sidewalks, residents relaxing on their porches, and new residents moving into refurbished homes.

After five years, the city has achieved its goal “to holistically improve neighborhoods through physical, social and economic investments that will tip the neighborhoods towards self-sufficiency” in Classen Ten Penn and Classen’s North Highland Parked Neighborhood. The work continues in northeast neighborhood Culbertson’s East Highland. Now, Capitol Hill and Capitol View neighborhoods are joining the program.

“I think the people are ready for the new changes,” Sosa explained. “I believe that they want a better community. We want a beautiful community, a more secure community, and not just for us but for the children.”

There is some hesitation and doubt among neighbors, included Sosa. The city considered Capitol Hill and College Hill, considered OKC’s main Hispanic neighborhoods, combined as one of the three neighborhoods when the program first kicked off. It wasn’t the first time neighbors heard about city programs or projects to help their neighborhood that never amounted to anything. For so long, the College Hill Neighborhood Association forged its own path in its quest to create a strong neighborhood, applying for grants through the Neighborhood Alliance of Central Oklahoma.

In early fall of 2017, the city invited College Hill Neighborhood Association to apply for the SNI program. By teaming with the residential and commercial leaders of Capitol Hill, the neighborhood association considered applying, but it first held meetings and knocked doors to gauge residents’ interest.

“We asked the people, ‘Do you want to do this? Are you willing to work because this will take a lot of work,” Sosa said. “The consensus was, ‘Why not?’”

Capitol Hill, which encompasses residential homes around the commercial district of Capitol Hill and the College Hill neighborhood, is the first SNI neighborhood located south of the Oklahoma River.

Last week, at a SNI neighborhood meeting for Capitol Hill, neighbors and stakeholders were asked to name neighborhood improvements they desired. Answers, in both English and Spanish, ranged from housing rehab programs to building new affordable housing units and community gardens to community centers.

Caleb Savage, a resident of Oliver Park South — a neighborhood south of Capitol Hill — chimed in when discussion emerged on bike infrastructure and public transportation. Savage, who attended the meeting with his wife, explained he was ecstatic to hear neighbors name what are emerging trends in urban design. While Savage supports neighborhood improvements, he has concerns that a residential renaissance could diminish housing affordability and displace residents.

“We see the Strong Neighborhood Initiative as being an opportunity to really dive in before we start running into issues, like displacement,” he said. “We can reach out to the community with opportunities for homeownership assistance and boost the neighbor associations.”

Savage, who located to the area 18 months ago after college, wants to see the area blossom holistically with current residents leading the charge to create a community that thrives for all.

Capitol View, a neighborhood that stretches from NE 36th Street to NE 23rd Street and from Lincoln Boulevard to Kelley Avenue, is the third northeast OKC neighborhood to participate in SNI.

Since SNI began, city planners have had to strike a balance between residents with doubts about the city efforts and residents eager for the assistance. The resolution is to build relationships with the neighbors based on mutual trust and respect, said Entz and her colleague Jennifer Sylvester, an assistant planner.

“We acknowledge it and we move in,” Entz said of discussing past history between neighborhoods and the city.

In her office, a sign reads, “Creando majors vecindarios” – which translates into English as “Creating better neighborhoods.”

“Once we acknowledge it and everyone sees we are sincere about moving forward,” Entz said, “we move forward.”

Reviving urban neighborhoods takes time, and the work goes beyond the city and its partners. So far, the private sector has responded favorably to the SNI neighborhoods, as evident by the $18 million in non-government funds plugged into the neighborhoods.

The SNI planners also know that for every urban neighborhood they help revive, there are others still struggling. The city invited eight neighborhoods to apply for the program in 2017.

OKC is nevertheless making strides. The payoff goes beyond economic development. Missing from city memos or SNI progress reports are details on the strong bonds crafted between residents and their city. Also, there is the impact on the neighborhoods’ youngest residents, some of whom have participated in SNI implemented afterschool and summer programs in their neighborhood elementary schools or played in renovated neighborhood parks.

“We involve kids and youth in what we do,” Entz said. “We want them to see the care and concern their parents have and the care and concern their government and city has too. That might sound like a social service to some degree. Maybe it is. This is just as much about social science and sociology as it is economic development and community development. It all starts locally. You can’t get any more local than neighborhoods.”

Print headline: Curb appeal; When Oklahoma City’s downtown and nearby districts began to see economic revival, the city teamed with struggling neighborhoods to revive their areas.