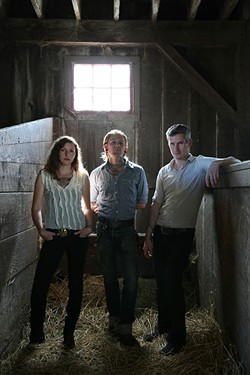 Music fans sometimes shrug off cover albums. When a band uses an entire project to perform songs made known by another artist, the result, even if well received and executed, is relegated by some fans to the novelty category.

The Devil Makes Three’s Redemption & Ruin is far removed from a between-albums holdover.

Counter to the release’s title, the album’s first half deals with songs of ruin — sin, substance abuse and heartbreak — including Robert Johnson’s “Drunken Hearted Man,” Willie Nelson’s “I Gotta Get Drunk” and Townes Van Zandt’s “Waiting Around to Die.” The redemption side plays on religious themes and atonement. Some of its better tracks include Phil Moore’s “There’ll Be a Jubilee,” “I Am the Man Thomas” by Larry Sparks and Ralph Stanley and Hank Williams Jr.’s “The Angel of Death.”

The Devil Makes Three (TDM3) guitarist Pete Bernhard said in a recent Oklahoma Gazette interview that the concept started as a way to demonstrate the band’s musical roots and pay tribute to the artists who have inspired them through the years. The act’s members also include upright bassist Lucia Turino and guitarist and banjo player Cooper McBean.

Where some other cover projects might be considered throwaways, a lot of thought went into Redemption & Ruin’s tracklist and song interpretations. TDM3 puts a great deal of care into everything it puts out.

“[Redemption & Ruin] was definitely a lot of work, to be sure,” Bernhard said. “More than anticipated.”

Everyone in TDM3 is a self-proclaimed vinyl nerd, and the band’s original idea was to press dual-sided black-and-white records. Bernhard said they had to abandon it after learning that mass producing a two-toned album was near impossible, but they didn’t want to scrap the concept altogether.

After Bernhard, McBean and Turino decided which artists they most wanted to pay tribute to, they came up with a theme and began selecting songs from various catalogues. Bernhard said working within self-imposed creative restraints was a unique challenge.

“It turned out to be a lot more difficult just because of the concept, which we’ve never done before,” he said. “We were trying to have all the artists that we picked not only be big influences on our band, but also fit the theme.”

Bernhard compared the process to crafting an old-school mixtape, but on an even higher level of creativity. Recording an actual studio album is a lot cooler than making even the most eccentric Spotify playlist.

“These are all people that we just met on the road,” Bernhard said. “It just came together perfectly that they were all available. We just called them all up and asked them if they want to do this, and they agreed to it. It worked out naturally.”

The band toured some for Redemption & Ruin and picked up the last leg of its promotional tour, including its stop in Oklahoma City, after Christmas. Bernhard said after wrapping up in February, the band takes a break to work on its follow-up project, a new album of original material.

Oklahoma fans can expect TDM3 to perform some Redemption & Ruin songs that weren’t included on the previous part of its tour as well as some new, unreleased material.

“We play a pretty long show,” Bernhard said, “so they’ll hear a little bit of every album and some stuff they’ve never heard before.”

TDM3 released its first three albums under its own label before signing with independent distributor Milan Records in 2006 and then New West Records in 2013.

Bernhard said one constant has remained along the group’s musical journey: its loyal fan following.

“We’re a band that has been very much a product of our fans,” he said.

TDM3 recently posted a fan hotline on its Facebook page, asking followers to call in with questions the band would directly address.

Bernhard said the hotline is part of a planned podcast series styled after a call-in radio show. The concept is to play music from TDM3 and other musician friends fans might not have heard before. Between songs, Bernhard and McBean answer recorded fan questions. Hundreds of them have poured in since TDM3 announced the call-in project.

At the time of this interview, TDM3 hoped to have the first podcast episode ready before it begins the next leg of its tour on Dec. 28 in Grass Valley, California. Bernhard said the band will continue doing traditional interviews as well — the podcast is another way fans can interact with their favorite musicians.

“The only reason we’re around is just because of our fans,” he said. “We wanted a way for them to get in touch with us directly.”

Print Headline: Revisiting roots, The Devil Makes Three pays homage to its influences while thanking fans ahead of its Jan. 11 show.