Instead, we get an ensemble cast more unlikable than anything since last year’s Fantastic Four stumbling through dialogue penned to fill time. 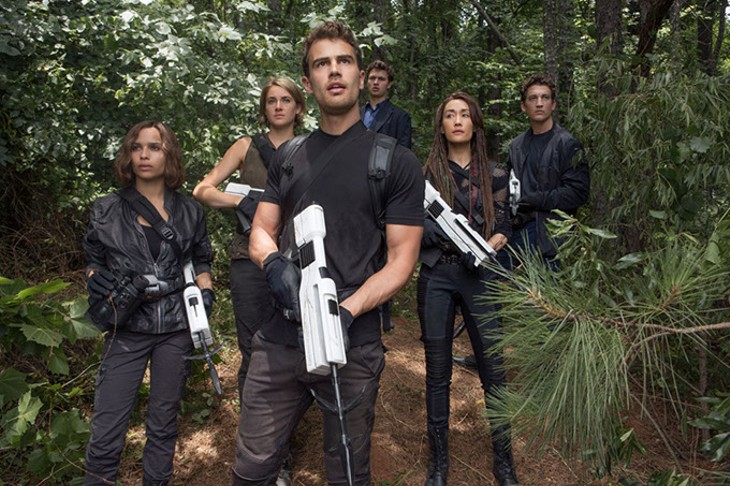 While a Hunger Games comparison is inevitable thanks to the similarities of the female-led post-apocalyptic, young adult novel adaptations, Allegiant does a good job differentiating itself with its quality. The Hunger Games features a talented cast, intelligent commentary, innovative production design and action directing, but The Divergent Series: Allegiant — Part 1 is lazy. It gives us a secondhand account of a similar tale watered down by artless interpretation.

Tris (Shailene Woodley) and her boyfriend Four (Theo James) must escape dystopian Chicago after discovering their walled city and personality-based faction system are components of an outside experiment.

The plot involves how the outside world no longer separates by personality type, but by genetic purity. People are either pure or damaged, with minimal explanation about what exactly that means. The plot point holds ethical ambiguity in a world where eugenics and human race purification resulted in genocide.

It’s a message of privilege masquerading as progressive politics.

Tris, Four and the rest of the Divergents, who are people so special they have more than one personality trait, are the experiment’s successful results, which means the world outside (until now thought unpopulated) is waiting for them. If viewers are confused — Personality factions? A guy named Four? — this movie is not for them.

When the group breaks out of the city, losing a few minor characters along the way, viewers feel even less than those of us suffering from the misfortune of being caught up on the series.

The escapees find a blurry, psychedelic wasteland that combines a ’70s bargain-bin science-fiction novel’s cover with the face of a forgotten pizza. Bad green-screen CGI echoes a more excitingly bad movie, like Journey 2: The Mysterious Island, where The Rock flies atop a giant bee. Viewers will long for that sort of fun while watching this film.

Instead, we get an ensemble cast more unlikable than anything since last year’s Fantastic Four stumbling through dialogue penned to fill time.

“These pools look radioactive, or maybe they were hundreds of years ago,” says Ansel Elgort (as Tris’ brother Caleb). Woodley and Elgort share no sibling dynamic, and any potential chemistry fizzles.

Elgort hits a pitch of nerdy ineptitude just shy of pitiable, while Miles Teller (as Peter) gives viewers an irritating mercenary rather than the sarcastic scamp the role calls for. However, his perfectly delivered line about a “weird shower” is the one of the film’s truly enjoyable moments.

Even Four, the best character of the previous films, has little to do. At one point, red, contaminated rain streams down Four’s face. He resembles Bruce Campbell in The Evil Dead with his chiseled good looks marked by rivulets of blood. If James could act a little sillier, or at least turn his furrowed brow to something self-aware, he could pull off oddball genre movies.

A scene where a trial must end in either execution or imprisonment offers unintentional comedy as the camera floats aimlessly, picking up several extras calling for death with all the eloquence of a picture book: “He must die!” and “We want blood!” I could be paraphrasing, but any dialogue reimagining might improve it.

Dialogue, especially that concerning major plot points, has the logic-skipping cadence that comes from an inner familiarity that forgets it has an audience.