The Dodgers name drives ticket and merchandise sales in OKC 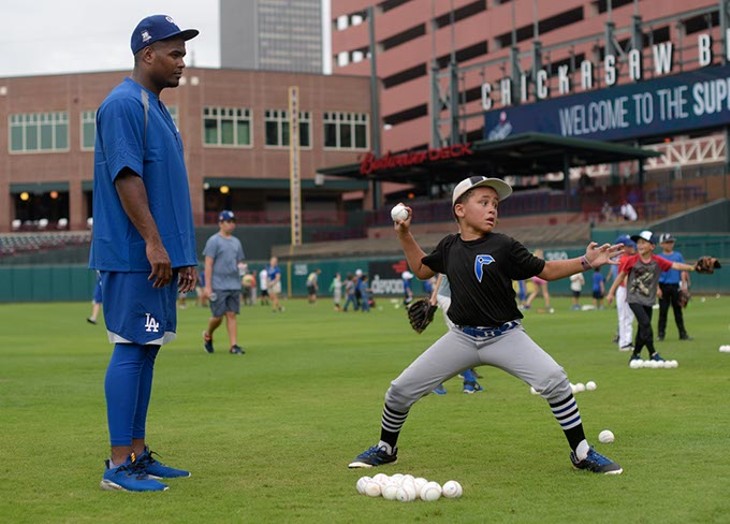 In 2015, when Lone Star Construction owner Ezequiel Hernandez heard the Oklahoma City baseball team was becoming an affiliate of the Los Angeles Dodgers and taking their name, he was transported back to Summer 1981, watching baseball as a child with his mother and father.

Hernandez was among many Latinos across the country who became transfixed by Dodgers’ pitcher Fernando Valenzuela. Born in a tiny Mexican village, Valenzuela rose from relative obscurity to win his first eight starts of the season (with five shutouts) and become the first player to win Major League Baseball’s Rookie of the Year and Cy Young awards the same season.

As a child in Texas, Hernandez didn’t grow up cheering for the Dodgers, but that changed during “Fernandomania.” His games became must-see television.

“Today, there are Hispanic players all over the place. When I was growing up, there weren’t that many,” Hernandez said. “You never saw that many players with a last name like yours, and indirectly, it told you, ‘Maybe this is not for me.’”

Although Hernandez grew up and became a fan of major league teams in Texas, those memories of watching Valenzuela forever linked him to the Dodgers. It speaks to the team’s brand being one of the most recognizable in professional sports, especially in Los Angeles’ Latino community, where many fans affectionately refer to the team as Los Doyers.

Michael Byrnes, president and general manager of the OKC affiliate since 2010, said the team identified more outreach in the Latino community as a top priority before the mascot change, but it has only accelerated with the new name.

This year, the team added a partnership with Supermercados Morelos, attending store openings and partnering with the grocery stores to host a youth clinic for area baseball players in July.

Hernandez was among prideful parents watching their kids get hands-on instruction from Oklahoma City Dodgers players.

“The Los Angeles Dodgers are a team that a lot of Hispanics cheer for, and when you bring them here, with some of the players they’ve had recently, it’s brought a lot of attention to them,” said Rueben Ortiz while wearing an OKC Dodgers hat.

Each of the last two years, the Oklahoma City Dodgers have placed in the top 25 for merchandise sold out of 168 minor league teams, Byrnes said.

“The Dodgers brand has a long history in the Hispanic community. It’s a brand people can relate to and cheer for, one they’ve followed for years. When they came to town, there was a new excitement in the community,” said Jorge Hernandez, who represents Supermercadoes Morelos with Tango Public Relations. “You already saw a lot of LA Dodgers merchandise, but now you see a ton of OKC Dodgers merchandise as well, and that’s great for the community to embrace the new team.”

OKC and the Double-A affiliate in Tulsa became the first Dodgers teams above A ball to bear the major league club’s name since the San Antonio Dodgers in 1987. The new brand association helped with merchandise and at the turnstiles.

In the four years Oklahoma City RedHawks were an affiliate of Houston Astros, Chickasaw Bricktown Ballpark drew a yearly average of 402,014 fans. In 2015 and 2016, the team has averaged 454,951 fans and is on pace with the average for 2017, according to communications coordinator Lisa Johnson.

“When you go to games, it feels like a large percentage of fans are Hispanic,” Jose Nunez said. “There are families everywhere.”

“A local family recently told me how passionate their 8-year-old was to watch the Major League Home Run Derby because Cody Bellinger was involved,” Byrnes said. “He had already chosen Corey Seager as his favorite player. The family was out on opening night [when Bellinger was on the team], and it helped them connect the dots for the home run derby.  I don’t know they would’ve watched it otherwise.”

Although 20-year-old pitcher Julio Urías was lost for the season to an elbow injury in June, his presence in Oklahoma City the last two seasons has drawn a lot of support from the Latino community. Like Valenzuela, Urías emerged from a small Mexican ranching community to become a rising star.

“People were like, ‘Is he the second coming of Fernando?’ The interest grew again for those who grew up in the [Fernando era],” Ezequiel Hernandez said. “He helped connect generations of fans.”

“[Cruz] used to hit so many home runs over the letters (high above left field) that I was worried about the building behind it,” Nunez said.

Perhaps no player has left a bigger impact in Oklahoma City than pitcher R.A. Dickey, who is the organization’s leader in wins, losses, appearances and starts. Of course, becoming a Triple-A record-holder is somewhat inauspicious. Dickey, a hard-throwing first-round pick, was only supposed to spend a few months in Oklahoma City on the way to major league glory.

“It’s a town I’ve grown very fond of, but nonetheless a place that I associate totally with my mediocrity as a pitcher,” Dickey said of OKC in his autobiography Wherever I Wind Up. “Is this going to be the top line of my baseball resume: a RedHawk immortal?”

He spent parts of seven seasons bouncing between Texas and OKC, so much so that he became good friends with Monte McCoy, a former University of Oklahoma graduate assistant coach, and the ballpark’s head groundskeeper since its opening in 1998.

“[Dickey] came to me on a few occasions and said that he was thinking about giving it up,” McCoy said. “He was done.”

At the end of the 2005 season, Dickey began throwing a knuckleball under the tutelage of former Los Angeles Dodgers knuckler Charlie Hough and Orel Hershiser. Although Dickey’s first few outings throwing the elusive and slow-fluttering pitch didn’t go well, it eventually became his calling card.

Dickey won the 2012 Cy Young Award at age 38 with the New York Mets and now pitches for the Atlanta Braves.

“It’s crazy that it all started here in Oklahoma City,” McCoy said. “He’s a real go-getter and one of the hardest workers I’ve ever seen.”

It’s not just the hard work of star players like Dickey and others that have come through OKC, like first basemen Adrian Gonzalez and Chris Davis, that stick with McCoy. It’s also the guys like Jeff Pickler and Kelly Dransfeldt that never achieved prolonged stints in the majors but provided memories for the fans.

The Dodgers Foundation capitalized on those memories by selling commemorative bricks to fans. The campaign raised over $22,000 for the foundation’s charity efforts, which includes education funding and support for first responders and was the largest single-run campaign for the foundation, said its director Jennifer Van Tuyl. The permanent brick display will be unveiled prior to the Friday game against the Round Rock Express.

“There are people that had their first date here, people that got engaged here, grandfathers and granddaughters that learned the game here. It was a fun way to engage and shine light on those memories for people in our community,” Byrnes said.