A sculpture professor from University of Oklahoma encourages exploration with an installation meant to be engaged, if not entirely understood. 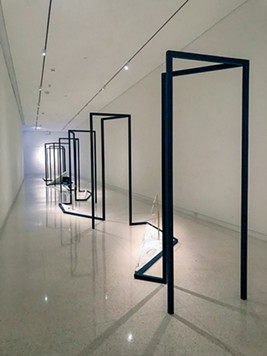 Artist statements can be a tricky business, especially when the creators aren’t trying to portray a story or a message, but to capture a specific feeling, an abstraction. The work is created entirely through intuition; as Michelangelo famously said, “Every block of stone has a statue inside it and it is the task of the sculptor to discover it.”

Daren Kendall’s attempt to explain Threshold With Me, his new installation at Fred Jones Jr. Museum of Art’s Sandor Gallery, demonstrates the limits of the language when pointed at works based entirely on one specific sensation.

“From inside a cage or the confines of space, you have the ability to imagine yourself free,” Kendall wrote in his artist statement. “While crossing the threshold can be exciting, it’s an overwhelming experience aligning two truths.”

And so it goes, like a translation from a proverb that made a bit more sense in its original language.

“The human soul writhes to communicate as conscious structures are eviscerated.”

“The site is prepared for passage with tools and scripts — a fox sparrow, a dancer, and an everyman possessed by visions of love.”

Threshold With Me is a path of connected steel doorways with supplements of concrete, brass rods and piano wire installed down the middle of a hallway of the museum. That path has no clear, right way forward, not like a playground for which designers had a distinct vision about how children should flow through it. In fact, most museum visitors won’t intuitively know that they should interact with the installation since it looks a bit imposing and, well, museum-y.

“It’s worth mentioning that I asked a few students if they would walk through it when they saw pictures,” Kendall said during a recent artist talk and performance piece. “A few said yes, a few said no, which is to be expected I think. We are all taught how to act in a museum, and it’s kind of a tight space. But as you move through it, you come to know it.”

The piece is the pursuit of a feeling Kendall gets when deciding whether to cross a threshold, leaving one space and all its memories for another space and all its possibilities. And as all artists should, he wants to create work that would delight him if someone else had created it first.

“I was adopted, and my mother gave me this book called Are You My Mother?” Kendall said. “It’s about a little bird fallen from its nest moving from place to place, asking the same question. He asks the dog, he asks the cat, he asks the crane, kind of democratically not recognizing himself in any of these things. I think that is kind of human but also descriptive of this experience, looking for self in the other. That is what motivates me to make work like this and share it with others, to see if we are speaking similar languages, to see if we are after the same thing.”

During the talk, Kendall referenced a medical study that showed how a mind’s memory resets when crossing a threshold from one room to another, leaving one set piece for another. Have you ever gone to the kitchen only to forget why? The study was trying to understand this universal experience.

Since there is a very real mental divide created by boundaries, the threshold isn’t only an architectural feature, but a metaphor and a ceremony whose meaning and intensity can change whether one is entering a bedroom, a classroom or a courthouse.

But even that is still a little too specific. In a way, Kendall really is trying to translate something alien into English. It’s his creative process and purpose that he’s trying to get at in the same way one would struggle to explain the color blue to someone who was born blind. He created this entire piece based on an abstraction. In an early episode of The Simpsons, Milhouse’s soon-to-be-divorced parents are squabbling over whether it’s possible to draw dignity during a game of Pictionary.

That’s what Kendall is attempting. He created a large-scale, visual interpretation of an abstraction and the best way to communicate abstraction is through intuition.

The long, triangular slabs interspersed along the pathway have what initially looked like molded footprints, but what Kendall explained as the result of his failed attempt to give the slab a finished gloss. Instead he started grinding down into the concrete and decided he liked that better. It would be like pools where water could collect and birds could frolic, a massive right turn on a significant design feature. 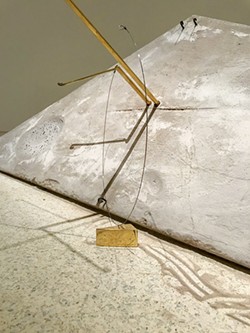 He even had conversations with OU School of Dance choreographer Boyko Dossev and dancer Chiara Ruff as he was constructing the piece. He wanted their thoughts on how the shapes and pathways invited and impacted motion. He’d considered a dance bar for when Ruff would perform the improvisation with him but realized she didn’t need it and changed his design. The resulting performance featured Kendall dragging along an amp as he created noise with the installation while Ruff made use of empty spaces along the pathway, emphasizing the interaction aspect of the exhibit, showing that this is art as conversation.

And the reactions to that art were interesting. Of the 50 attendees to the performance, only about 10 even dared to cross through any of the steel doorways before the presentation. These were mostly students, professors and other artists — people who know museum behavior quite well, which might have actually been a barrier. Children would surely see the doors for what Kendall intended. Even the most courageous would still pause before the first threshold, look about to see if anyone would stop them from breaking the traditional bubble between museum sculpture and patron and then tentatively step through — observation tipping over into exploration.

Despite coaxing during the presentation, the crowd mostly stayed pressed against the walls. Again, the piece is steel, concrete and brass — not usually inviting materials, but Kendall is hoping that the presentation can change perception.

“This is another thing I’m trying to do,” Kendall said. “Steel and concrete are very harsh materials that we know and see every day. But I’m trying to have a conversation with them, develop a familiarity and, in a way, soften them, soften our experience with them.”