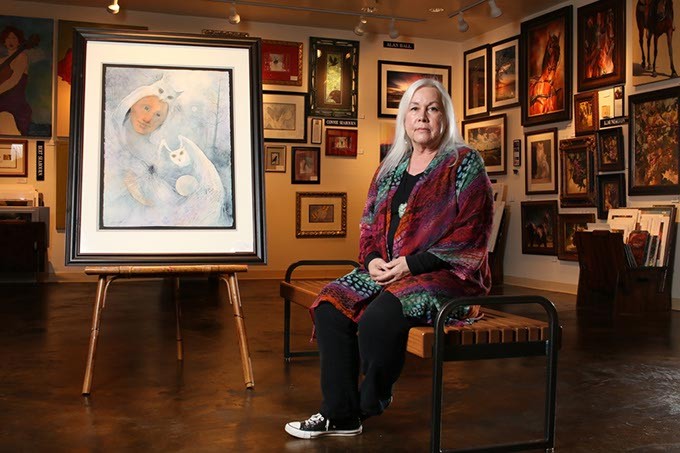 Though Christian tradition rarely depicts God in ways other than male or masculine, the Bible does make reference to the deity’s feminine side.

“As a mother comforts her child, so will I comfort you; and you will be comforted over Jerusalem,” reads Isaiah 66:13.

The idea that God not only displays both masculine and feminine traits, but actually transcends gender and all other biological constraints is one that has long stuck with local painter Connie Seabourn. The concept also forms the basis for her newest exhibition The Feminine Face of God, which opens June 2 at Nona Jean Hulsey Gallery inside Oklahoma City University’s Norick Art Center, 1609 NW 26th St. The show runs through July 28.

Seabourn’s work has dealt with divine femininity for years, but the new exhibit is comprised of around 45 pieces the artist crafted since August.

To Seabourn, it is not much of a leap to connect God with female pronouns or characteristics usually associated with women. Those who believe in a loving God, she said, should also know there are few things stronger than a mother’s love. To associate the two seems natural.

Seabourn was at a creativity and spirituality workshop the first time the connection between God and femininity won her imagination. She was listening in on a class taught by watercolor painter Doris Cline, a member of the Congregation of Sisters of St. Agnes who had spent a lot of time studying biblical women.

This impressed Seabourn, who was already referring to God as “Father/Mother.”

While this line of thinking was one she already held, attending the workshop emboldened divine femininity into Seabourn’s belief system.

“I started thinking of God or spirit as completely above gender,” she said.

Throughout history, there are numerous examples of artists depicting God in their work.

From the awe-inspiring detail in Michelangelo’s Sistine Chapel murals to Leonardo da Vinci’s The Last Supper, many of these works portray their heavenly subjects as bearded white males. Seabourn desired to see a version of God that resembled her as a woman — something to which she could more easily relate. It was a revelation that got her thinking about even broader depictions of God.

“I realized if I felt that way, then there are probably people of different races who would like to see a god that looks like them,” she said.

In The Feminine Face of God, Seabourn has two pieces that specifically aim at diverse representation — one looks like herself, and one depicts God as a black woman.

Diversity is sought in many other places, so Seabourn said there is no reason it should not also be brought to spirituality.

“I don’t want to cheapen the thought,” she said, “but it’s a lot like little kids who want to see a Santa Claus that looks like them.”

Seabourn has been painting nearly all her life. Her work can almost always be spotted for its characteristic ethereal feel.

Many of her pieces come layered — both in translucent watercolor paint and meaning.

The artist worked for a bank as a graphic designer until she had her daughter. She left work to stay at home with her child. Her painting at first just kept her occupied while she was at home, but soon, she realized it could be turned into a means of further providing for her family.

When art became a form of income, she picked up her productivity. That meant no sick days.

She remembers having a cold and trying to figure out just the right angle to lay her head so she could continue her brush strokes.

“I thought if I could [go to work] for a different boss, surely I’m just as important as that other boss was,” she said. “I would think, ‘I don’t feel good today, but I still need to be working.’”

In one banner year, Seabourn recalls completing around 450 original paintings. In most years, she is able to finish a few hundred.

She paints between four and eight hours each day.

Seabourn still loves art, despite the long time commitment. There is no way she could bring herself to do it each day if she was not incredibly passionate about it.

“I still have lots of energy and lots of love for it,” she said. “It’s not ever a drag for me; I really am excited and happy about painting all the time.”

Seabourn grew up as a member of the Roman Catholic Church with the rest of her family.

She has since left the organized religion of her childhood and instead opted for personal reading and meditation. She is constantly striving to learn and grow.

“Everyone is spiritual, even if they’re not aware of it,” she said. “I just try to stay always aware of my spiritual side.”

Depicting God in a feminine way is about more than representation. It is about empowering women and showing that traits normally associated with women are not inferior or weak.

In a world where God is exclusively seen as a man, women like Seabourn and others who do not closely identify with the typical God image can feel like outsiders. If God is mighty and God is a man, Seabourn asks what that means for women.

“If someone is powerful, it’s probably a man,” she said. “That’s kind of the thought that most people would have.”

The Feminine Face of God shows that what makes God mighty is not just raw power, but a loving and nurturing nature.

Seabourn is aware that the idea of a feminine God is taboo to some. The artist said it is not her intention to provoke.

Instead, she hopes by showing God with a fuller set of characteristics, she can, in turn, get a bit closer to more fully understanding the divine.

“I’m not trying to be offensive,” she said. “I’m trying to help people expand their thinking of what God is.”

The Feminine Face of God opening

Note: The exhibit runs through July 28.