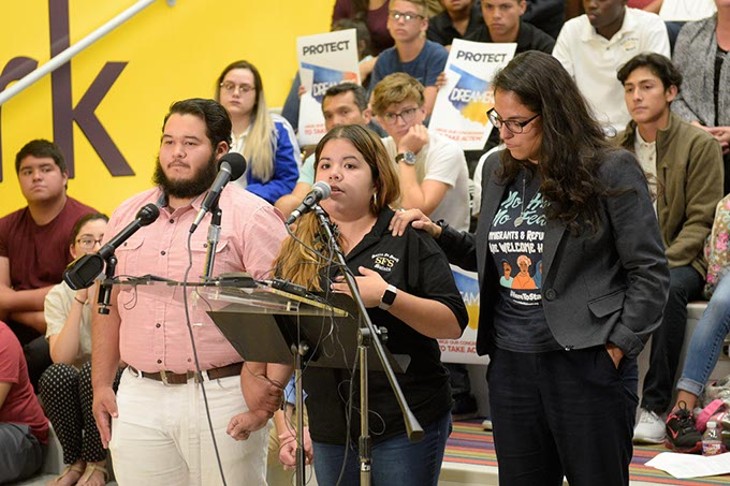 Brisa Ledezma spends her days preparing lessons, grading papers and teaching sixth-graders at Santa Fe South Schools in south Oklahoma City. Ledezma was born outside the United States, and her journey to teaching has been a long and winding one. As an undocumented immigrant youth, there was no path for someone like her — brought to the United States as a young child and educated in the public school system — to legally get a job, drive a car or travel internationally.

In 2012, under the Obama-era Deferred Action for Childhood Arrivals (DACA) program, Ledezma and thousands of other immigrant youth earned temporary resident status and started to do things they previously couldn’t. For Ledezma, that included obtaining a social security number and a driver’s license as well as earning a bachelor’s degree and entering the classroom as an educator. Perhaps more importantly, she no longer lived in what she called “the shadows” — the constant threat of deportation.

Now the threat of deportation is felt once again by Ledezma and others. Hours after U.S. Attorney General Jeff Sessions announced the end of DACA program, which was in response to several conservative states’ attorneys general’s lawsuit threats, Ledezma delivered a fiery speech to hundreds at a press conference and rally in support of DACA recipients at Santa Fe South High School.

“Now, I am here,” said Ledezma, standing beside two other Oklahoma DACA recipients, “trying to give back to my community and help those that were once like me. Now, this can be taken away. I wouldn’t give up. I am a Dreamer, and I will keep fighting.”

In revoking DACA, the Trump administration called on congressional leaders to enact a legislative solution for Dreamers. While federal lawmakers, including Oklahoma City’s U.S. Sen. James Lankford, echoed the president’s call, locals responded with plans to ensure lawmakers do just that.

“We need to keep the pressure on them,” said David Castillo, Greater Oklahoma City Hispanic Chamber of Commerce president and CEO. “We don’t want them to say one thing but do another. We don’t believe it will happen this time.”

“Now more than ever, we need our members of Congress — Republicans and Democrats — to pass legislation that will keep immigrant youth safe,” Judith Huerta, co-director of Dream Act Oklahoma - Oklahoma City, said. “There should be no gap in protection.”

In the days leading up to the Trump administration’s decision on DACA, given the speculation that the president was considering revoking the program, local immigration attorney Ryan Patterson asked one of Oklahoma’s U.S. senators what they would do to ensure DACA wasn’t eliminated. Speaking at a town hall on the campus of Oklahoma Christian University, Lankford responded, “We don’t hold children accountable for the actions of their parents. We also don’t blanket give people citizenship.” The conservative Republican went on to discuss pending bills addressing legal status to DACA recipients.

His constituents would soon repeat his words.

At the Greater Oklahoma City Hispanic Chamber of Commerce, Castillo and his staff are organizing meetings between federal officials and community leaders. The chamber is advocating for passage of a “fair and just immigration reform law” pertaining to the DACA enrollees. It is imperative that Congressional leaders view an accurate profile of DACA recipients in Oklahoma City — some are students in the local schools and colleges while others are employed or leading local businesses and nonprofits.

“We are talking about 7,000 participants in Oklahoma,” Castillo said. “These are some of the brightest students in our school system. We’ve started to see these young leaders more and more. It has been incredible. They are educated. They are vibrant.”

Lankford and U.S. Rep. Steve Russell, who serves Oklahoma’s 5th Congressional District that includes a majority of Oklahoma County and Pottawatomie and Seminole counties, have each issued statements in support of Congress finding consensus on a permanent solution for DACA recipients. The chamber plans to lobby all of Oklahoma’s Congressional delegation to ensure their statements align with their actions and votes in Washington, D.C.

If Congress doesn’t act, the end of DACA will affect far more people than just those who participated, said Castillo, who noted no solution would break apart families.

“Imagine taking 7,000 Oklahomans out of the economy,” Castillo posed to Oklahoma Gazette in an interview. “As a state, we are already having budget problems, and tax collections will be down. It also has a ripple effect. You would see fewer people buying cars and homes, purchasing items at Walmart and all retail shops. Of course, tax collections.”

Waiting for Congress to act is easier said than done. DACA took effect by executive order in 2012 and was never seen as a permanent answer for providing citizenship for children brought to the United States by their parents in violation of immigration laws. In the months ahead, as the spotlight turns to the U.S. Capitol and potential legislation, immigration attorneys and advocates will be faced with tough questions.

“This is a lot we don’t know,” Patterson, who serves as legal advisor to Dream Act Oklahoma - Oklahoma City, told Oklahoma Gazette. “Actually, the question I am getting right now is, ‘How can I help?’ To which my response is to speak to your representatives and ask them to swiftly pass a clean DREAM Act bill.”

Immigration services no longer accept initial requests to join DACA, but renewal requests will continue to be accepted through Oct. 5. Patterson advises that DACA holders speak to qualified immigration lawyers or organizations like Dream Act Oklahoma about renewal or other immigration benefits.

Patterson said the deportation fears that DACA enrollees and their families are feeling are real and justified. In a White House memo called “Taking Points — DACA Rescission,” one bullet point suggests DACA recipients “use the time remaining on their work authorization to prepare for and arrange their departure from the United States.”

“It is disheartening that on top of the uncertainty many already face coming from mixed status families,” Patterson said, “Dreamers now face an existential crisis that they have not really known until now.”

Print headline: Time to act, The fight for permanent legal status will take Dreamers and their allies to Oklahoma’s Congressional delegation. Efforts are already underway.