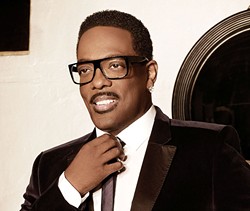 Charlie Wilson had the kind of mentors others dream about, the kind that sound like tall tales.

He learned much of his musicianship and technical expertise from recording for Leon Russell’s Shelter Records in Tulsa with The Gap Band. Back then, it was commonplace for Wilson to be talking with “Uncle Leon” while George Harrison, Ringo Starr or Eric Clapton walked in and sat down, just hanging out on a regular day at The Church Studio in Tulsa.

Four decades later, Wilson is the mentor. The music he made with brothers Robert and Ronnie Wilson in The Gap Band, including major hits like “Party Train,” “Burn Rubber on Me (Why You Wanna Hurt Me),” “Humpin’,” “Early in the Morning” and “You Dropped the Bomb on Me” that set the standard for funk in the 1980s. Those songs provided the soundtrack for many childhoods, which is why so many artists, including Snoop Dogg, T.I. and Wiz Khalifa, now call Wilson “Uncle Charlie.”

All of those performers, along with Robin Thicke, Pitbull and Lalah Hathaway, appear on Wilson’s latest solo album In It to Win It.

It’s Wilson’s most massively collaborative solo album since his solo career took flight in 2005 with Charlie, Last Name Wilson, the collection that returned Wilson to the front lines of modern R&B.

“Basically, for a lot of these features, these people have been wanting to work with me for a long time, and I just thought it was time, man, to get this happening,” said Wilson, who performs March 17 at Chesapeake Arena, 100 W. Reno Ave. “I never thought it was impossible, but I thought it was improbable. And everything just panned out — it fits.”

Wilson said he constantly challenged producer Wirlie Morris to bring in these collaborators, responding to a request from his wife, Mahin Wilson, to put Pitbull on the song “Good Time.” But one of his most rewarding experiences was with Hathaway, whose father, late R&B legend Donny Hathaway, was a guiding force in Wilson’s early career.

“She reminds me so much of her father, and I just looked up to him,” Wilson said. “I got a chance to meet him a long, long time ago when I was in college. I went to a black expo in ’71 in Chicago, and I was in a class there and he was on the piano, doing a seminar. So he got to the point where he said, ‘I need somebody to come down and do a little ear training.’ People in the class were pointing at me, so I went down and sat at the piano. We were doing some stuff where he would be singing, then I’d do some singing. He’d sing a note, and then I’d sing the same note plus another note, and it just sort of shocked him.”

Hathaway was well on his way to legendary status at the time and would become best known for classics such as his duets with Roberta Flack, “Where Is the Love” and “The Closer I Get to You,” and the holiday standard, “This Christmas.” Hathaway was suitably impressed with Wilson and let it be known.

“So he told his best friend and roommate, Leroy Hutson [of The Impressions]. Leroy Hutson later told me, ‘Donnie always talked about this guy named Charles Wilson. He’s going to be something special and the world needs to watch out for him.’”

Lalah Hathaway joins Wilson on “Made For Love,” which Wilson described as a throwback ballad.

“I thought it was an appropriate song for us to sing. It’s like an ’80s ballad like ‘Endless Love’ with Diana Ross and Lionel Ritchie,” he said. “And she just sang her butt off.”

Since Wilson’s 2005 comeback, he has become a friend and frequent collaborator with Snoop Dogg, who shows up on “Gold Rush,” and he was featured prominently on much of Kanye West’s 2010 album, My Beautiful Dark Twisted Fantasy.

These experiences pushed Wilson to always move forward, and while he plays classic Gap Band songs in concert, he never lets his past overshadow his present.

“I’ve asked God to let me be a blessing and an inspiration to people, and I’m getting my wish, but I have to stay current,” he said.” I will not be the guy who makes records that are nostalgic and people go, ‘Look. He’s a fading star.’ When I start fading, it’ll be because I’m laying down and I don’t feel so good. It won’t be because of my music.”