The Grahams release new album, documentary inspired by the rails, recorded in Oklahoma 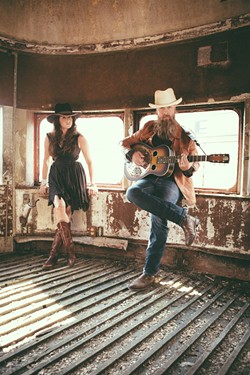 One thing Alyssa and Doug Graham love more than Oklahoma is each other. At least that’s the impression they give when discussing their new documentary and album, which was recorded in Norman and drops Tuesday.

The Manhattan-based husband-and-wife duo has seen a lot in the last year, and it was mostly from an Amtrak train window. The pair traveled across the country, filming the documentary Rattle the Hocks, which chronicles their songwriting journey.

The idea for the movie came about after the Grahams became obsessed with “The Farmer-Labor Train,” a Woody Guthrie song about unions making their way into the government. In the song, Guthrie imitates the sound of a train with his voice.

It resonated with Alyssa and Doug, and neither could shake it from their heads.

“We decided … we had to get out and really live on the train to experience the sort of folk music that came out of the history of the American rails,” Alyssa said. “So we spent all of last summer, three months, riding the train.”

The two rode every line that Amtrak offers, playing and writing music in cars, at stations, in recording studios and in venues from Memphis to New Orleans. Along the way, they amassed enough material for a new album, met with 10 producers and recorded with other musicians.

After the summer on the rails, they rode the Heartland Flyer into Norman and met up with Tulsa-born producer Wes Sharon to record the record. That was also when they fell in love with the Sooner State.

“It just hit us really hard in the soul,” Doug said. “The people we met are so genuine and so real, and they took such good care of us.”

Neither Alyssa nor Doug had been to Oklahoma before, but they both agree that the people they met while here are now family.

That family includes Sharon, John Fullbright and members of Turnpike Troubadours and others who helped create Glory Bound, a double album that includes the live recordings from their railway tour and the studio album recorded at 115 Recording in Norman.

While both albums have mostly the same songs, they are two completely different listening experiences because they feature two producers who record in very different ways.

Sharon likes to record “on the grid,” building the session from the ground up as he isolates each musician to get every detail of their instruments, whereas Cody Dickinson, the producer on the railroad recordings, likes to gather the band together, set up a bunch of different microphones and capture the live musical energy. The albums also feature different musicians on the repeating songs, Alyssa said.

“This was really exciting to us because music is always moving and it’s always different,” Alyssa said. “We just like playing with as many cool, creative musicians as we can. Then the music becomes something different and outside of you, and that’s what our goal is.”

Alyssa and Doug have been together since they were preteens in New York.

They began playing music together as friends shortly after Alyssa turned 16 and have stayed together for 20 years. They are touring for the new album and hope to play in Oklahoma sometime in June.

They wrote their last album, Riverman’s Daughter, along the Mississippi.

Print headline: Locomotive love, A new album and documentary are inspired by the rails.