The Great Race hits its brakes in Bricktown 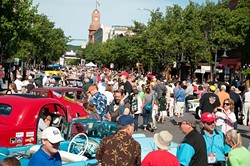 In The Grapes of Wrath, John Steinbeck called Route 66 “the mother road, the road of flight.” Migrants fled the Dust Bowl, driving “the long concrete path across the country,” heading west in search of better lives.

Today, the nation’s longest drivable stretch of Route 66, more than 400 miles, runs through the state and those who drive the road are no longer fleeing Oklahoma. They’re coming here.

Oklahoma City hosts competitors during a stop Sunday, Father’s Day, as more than 120 antique automobiles roll onto Mickey Mantle Drive in Bricktown for the $150,000 event.

Started in 1983, the Great Race is not a speed race but a time/speed/distance rally. Each vehicle receives instructions each day detailing every move down to the second (no GPS or odometers allowed). Teams are scored at secret checkpoints along the way. At race’s end, the team with the lowest score wins $50,000.

OKC is the second of eight overnight stops along the 2,400-mile route. There also will be lunch stops in Claremore on Sunday and Elk City on Monday. Last year’s event from Maine to Florida drew over 250,000 spectators, Stumb said.

“That was all she wrote,” Stumb said.

Hollenbeck said when she attends trade shows around the country to woo sporting events, many people consider OKC to be the “zero baseline image.”

“When they get here, they’re absolutely blown away,” she said.

She credits MAPS and local business development for the success.

“We, as locals, kind of take that for granted because we see it every single day, but this stuff doesn’t happen in other cities,” she said. “It’s super fun to bring somebody to town and show them everything we have.”