'The hills are alive' in OKC this week 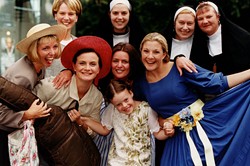 It has become a worldwide phenomenon, selling out venues and thrilling audiences both young and young at heart.

“This isn’t a showing of a 50-year-old movie,” said Oklahoma City event co-producer Joe Poe. “It is an audience participation event.”

Indeed, it’s much like karaoke for cinema nuts, as costumed fans belt out the words to the musical’s biggest hits, such as “My Favorite Things,” “So Long, Farewell” and “Do-Re-Mi,” in time with the film.

“It’s not about seeing a movie on the big screen or singing the songs to the movie. It’s about being surrounded by people with shared values sharing them with you,” Poe said. “It’s a night when the old truths are honored: a commitment to family, the treasure of romance and hope for a brighter future.”

The classic movie starring Julie Andrews and Christopher Plummer turned 50 this year. After its release in 1965, it earned 10 Academy Awards nominations and won five, including Best Picture. Before becoming a screenplay, The Sound of Music was the final musical written by Rodgers and Hammerstein and launched on Broadway in 1959. Both productions were inspired by the 1949 memoir The Story of the Trapp Family Singers, written by Maria Augusta von Trapp.

The film gained new life — and a new generation of fans — in 1999 after the sing-along version swept the United Kingdom. Since then, it has been performed more than 10,000 times in 11 countries.

Poe said the film was restored to full-screen Technicolor, complete with subtitles so audiences can sing along.

Entry includes a vocal warm-up at 7 p.m. and a “magic moments fun pack” with props that participants can use during key movie moments. The film begins at 8 p.m.

Originally, the sing-along was planned for May 16 at Myriad Botanical Gardens but was rescheduled due to weather.

Poe said he has seen the film about 80 times, and at the sing-along, it’s almost like being part of the movie.

The event has sold out seven years in a row at Los Angeles’ Hollywood Bowl. In fact, Poe said attendees in the front boxes paid as much as $200 a seat.

“I paid $175 each for 12 tickets,” he said about the LA performances. “And I don’t even really like musicals, except for The Sound of Music and The Wizard of Oz.”

Print headline: Favorite things, Sing-A-Long Sound of Music is a global phenomenon that celebrates the 50-year-old film with audience participation, props and costumes.