The Hit Men bring audiences on a stroll down memory lane 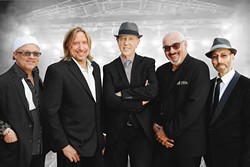 The Hit Men are no strangers to the annals of pop music history. Many might not recognize Lee Shapiro, Jimmy Ryan, Larry Gates, Russ Velazquez or Steve Murphy individually, but the acts they worked, orchestrated and recorded with are a different matter. Their resumes include legends such as the Ramones, Elton John, Frankie Valli and the Four Seasons and Carly Simon.

“Everyone in the band has an extensive legacy and resume of either being a featured artist, performing with featured artists or recording with them,” said keyboardist and vocalist Lee Shapiro.

The quintet tours and performs hits spanning the 1960s to the 1980s.

“One thing we do is we don’t just pick our favorite songs for our show,” said Shapiro. “We only play hit songs that we were part of the tour, part of the recording or part of the act.”

Shapiro is most known for his time as keyboardist and music director for Frankie Valli and the Four Seasons in the 1970s and 1980s.

Shapiro said he first tossed the idea of The Hit Men to Valli in the late 2000s.

“I’m still friendly with Frankie Valli,” he said. “About six years ago, I went to a recording session that he was on, and through the success of Jersey Boys, I told him I was thinking about doing this because he always asked me why I didn’t keep performing after Frankie.”

After parting ways with the group, Shapiro entered the recording industry and created music for television. He also worked for Fisher-Price toy company and invented Rock ’N Roll Elmo.

He reached out to friends who shared similar backgrounds: talented musicians who worked with headlining talent.

“So we put it together and we did a rehearsal and decided to play ‘Oh, What a Night,’” he said. “We looked around the room afterward, and it was like, ‘Gee. Wait a minute. That was really good. Maybe we should give this a shot.’”

An agent caught an early show and convinced The Hit Men they had an audience.

“Now we play all over the country, all year long,” he said. “It has turned into something that really hit a nerve with baby boomers.”

Shapiro is adamant that The Hit Men is not a costumed cover act.

“We’re not a tribute band; we’re not actors from a show,” he said. “When we play songs from hit records, we tell stories about the making of a hit record, it’s because we were there.”

Shapiro said what makes The Hit Men experience unique is the power of memory and quality music. The musicians share stories about the songs and musicians they worked with and project past performances in time with the live show.

“It’s really a kind of time transporting, nostalgic event, in that you are seeing the people who played on the hits, playing the music the way you remember the hit, then you see images of them doing so,” he said. “What we really provide to people is time travel. We guarantee people that they will leave the theater happier and younger than when they got there.”