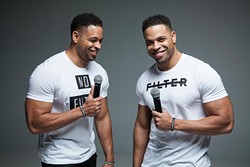 Being funny on YouTube is one thing. Finding consistent laughs live on stage for an hour or more is another.

But a challenge has never stopped The Hodgetwins before. Virginia-born twin brothers Keith and Kevin Hodge are known for their comedy, fitness and relationship advice channels on YouTube. Their three main channels — TwinMuscle, TheHodgetwins and askhodgetwins — each have more than 1 million subscribers.

Their humor is often explicit, outrageous and perfectly ripe for an internet audience. Recently, they have sought to bring that humor out from behind phone and computer screens and directly in front of their large, global fanbase.

Keith and Kevin Hodge have tallied nearly 100 live shows together, but every journey begins with a first step. Keith remembers having a small panic attack the night before the internet sensations’ first gig.

“The night before, I couldn’t breathe. I said, ‘Man, I ain’t going up there tomorrow; I’m cancelling all this shit,’” Keith said. “It was nerve-racking.”

The twins, fortunately, did not end up cancelling their debut performance at Los Angeles Convention Center. In fact, things went well, and the duo was able to use high attendance figures from its first gig for subsequent comic bookings. Previously, the Hodge brothers had a hard time breaking into live comedy because there was some general doubt about how their YouTube act would translate into stand-up.

Now, The Hodgetwins have toured across the country. They are planning a tour of the United Kingdom and recently returned from a series of shows in Australia.

It isn’t a bad resume for a pair of brothers who have faced unemployment and depression.

Though now true internet celebrities and career YouTubers, there was a time when Keith and Kevin depended on steady paychecks from 9-5 jobs like most other people.

They were doing their best to balance working for AAA with their unprofitable hobby making YouTube videos when their employer fired them for filming a video in its offices.

Rarely is there a good time to be fired, but their termination came at a particularly tough time for Keith, who found himself with a pregnant wife and without medical insurance. Both brothers said they were in a low emotional place.

Without a job, they took a chance and turned their attention to YouTube full-time. Like some other internet success stories, a sudden influx of time and unemployment pay allowed them to establish a semi-lucrative footing in the online market and gave them the opportunity to grow a consistent following.

“They actually did us a favor [by firing us],” Kevin said, “because we were on YouTube, but we didn’t really have time for it yet.”

The Hodgetwins have so many videos on YouTube that, between all their channels, it seems like they spend the majority of their days in front of a camera. Keith said while they log more hours making YouTube videos than they spent working at their former jobs, it does not feel like it. They both said they would never go back to a regular day job again.

Growing up dirt-poor in rural Virginia, a future in stand-up comedy or YouTube stardom seemed like a wild dream. The brothers were relatively shy loner types in their youth. They said they were less funny than they were just plain weird.

They were also inseparable. In a November interview with LA Weekly, they said the longest they have ever been apart is 10 hours.

Despite the explicit content in much of the duo’s humor, Keith said their mother raised them in a strictly religious household.

“She used to wake us up at 2 a.m. and say, ‘Y’all didn’t take those drugs, did you?’” Keith said. “She was very protective and would always quote the Bible to us.”

While the tone and type of humor in The Hodgetwins’ live act is similar to what is found online, the format and content are obviously different. The live show puts a special emphasis on their family background and backstories. They also take the stage act more seriously than a video post.

“It’s a lot easier when you’re doing a YouTube video, because nobody is watching you and you’re a lot more comfortable,” Keith said. “But as soon as you walk onstage, you have a microphone in your hand and you have to be funny for an hour.”

The brothers are not using their live shows to merely further capitalize on newfound fame. The longtime fans of comedy greats like Eddie Murphy, Bill Burr, Andrew Dice Clay and Robin Williams are serious about the craft. They watch recordings of each live show and take notes. They want to improve.

“You have to become a student of your own comedy, and you’ve got to really put a lot of time into it,” Kevin said. “It’s a really daunting task, but you have to tell the same joke like 100,000 times throughout the years. If you’re not passionate about it, you won’t last very long.”

Anything less than passion, they say, would be a disgrace to the comedians they grew up idolizing. Visit youtube.com/user/hodgetwins.