The Hood Internet, Sports, Jabee and more bring in 2018 at Tower Theatre's Uptown Get Down 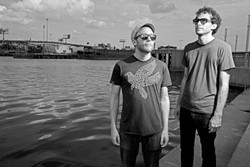 When people walk by Tower Theatre today, they can look up at a marquee promoting the many touring acts and film screenings now regularly held there. They will also notice a vibrant surrounding hub of activity in Uptown 23rd District, the rising commercial and entertainment district on NW 23rd Street between Broadway and Pennsylvania Avenues.

But Chad Whitehead remembers a time when the most he saw in the area was untapped potential.

“This is my neighborhood,” said Whitehead, one of Tower Theatre’s operating partners. “I own a home in Jefferson Park. Walking past an unopened, closed Tower Theatre on New Year’s Eve every year felt kind of lame.”

This year, a Tower Theatre newly buzzing with activity takes the first step in its quest to become a prominent New Year’s Eve destination. Uptown Get Down, a music-centric New Year’s concert and party, begins 9 p.m. Dec. 31 at the remodeled historic theater, 425 NW 23rd St.

An all-star cast of locals — including Saint Loretto, Carte Blanche, Jabee and Sports — will be joined by Chicago DJ duo The Hood Internet. Admission is $23 through Saturday, rising to $24 Sunday and another additional dollar for each day leading up to the event.

Whitehead officially stepped in as an operating partner of Tower Theatre in April with a group that also includes Stephen Tyler and Jabee Williams. In the months to follow, the group has helped the venue transition from one that went unused for several years to a site that regularly hosts popular music, comedy and film events.

Some of Tower Theatre’s biggest shows in 2017 included performances by rappers Talib Kweli and Rakim, pioneering electronica act The Crystal Method, California rock band Wavves at a special Empire Slice House anniversary event and comedian Maria Bamford, star of the Netflix series Lady Dynamite. In 2018, Tower Theatre is already scheduled to host Marty Stuart on Jan. 21 and Wanda Jackson on Feb. 17, among many other shows.

Tower Theatre already built a name by hosting concerts, but Whitehead said Uptown Get Down is the venue’s opportunity to thank the community that supports them.

“We want to celebrate with the neighborhood,” he said. “That’s what Uptown Get Down is. It’s an indoor block party.”

Whitehead wants Uptown Get Down to become a go-to New Year’s Eve event for people who feel stuck between large, family-focused gatherings and upscale, high-dollar parties. The Tower Theatre show is 21 and up and will feature music nearly nonstop from the time the doors open to when the concert ends.

The addition of hip-hop mashup DJs The Hood Internet to the celebration is ideal for the kind of vibe Whitehead is trying to establish for the event.

“I’ve been a fan of theirs for almost a decade,” he said. “I don’t know if Oklahoma City is aware of what all they do and how long they’ve been doing it, but long before Girl Talk was a household name playing giant festivals, The Hood Internet was doing the same kind of DJing before that.”

Whitehead said The Hood Internet’s music is accessible to a wide range of people, and because it changes up enough to keep things interesting, the act will be perfect for the casual party atmosphere.

Tower Theatre intends to make Uptown Get Down an annual celebration. Whitehead wants to kick off the event strong this year, but he also expects it to morph over time.

“We really have eyes for this, thinking, ‘What will this look like in five years when we hit 2023?’ and kind of building it up. We know it’s a long journey, but we feel like there’s room for something like this on New Year’s Eve in Oklahoma City.” 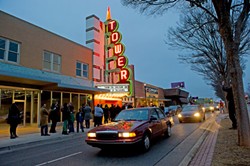 “We’ve worked really hard to get it up to speed as quickly as possible,” Whitehead said.

The operating partner even admits that Tower Theatre might have moved too fast in establishing itself. But part of the urgency was about catching OKC up to a level the venue organizers think the city should be at.

“Our drive at Tower Theatre is the same drive that the rest of the city has,” Whitehead said. “It’s like, ‘Why can’t we grow up and have nice things that Kansas City and Dallas and Austin have?’ We live here; we feel the same kind of frustration and excitement for the potential of Uptown 23rd and of Oklahoma City and of Tower Theatre. That’s our core motivator every single day.”

In 2018 and beyond, Whitehead said people can expect the venue to increase the quality of its bookings as it establishes a reputation in the local market while maintaining a diverse range of offerings.

Many have long asked why OKC cannot establish itself as a more attractive stop for music and entertainment options. Whitehead and company hope to provide their own solution.

“We just got kind of tired of sitting around and waiting for someone else to do it,” he said. “We had a chance to do it here, and we’re just throwing everything we have at it every day.”