The King of Queen returns for encore performances 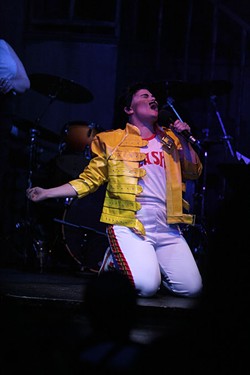 Don’t stop them now. Mercury-flavored performance The King of Queen is returning for two encore performances, 8 p.m. Friday and Saturday at The Boom, 2218 NW 39th St.

More than just a tribute to victory and struggle anthem factory Queen, the rock musical chronicles the life of a transgender man, played by Max Warner. He goes through hard times, and plot points connect to iconic Queen songs. He is also guided by his guardian angel — Freddie Mercury, naturally.

Mercury is played by Leslie Hensley, known on stage as Balthazar. Hensley’s known for more comedic performances, but King of Queen has a depth to it that left audiences demanding more after its initial run in November.

“The first response to the show, it was overwhelming,” Hensley said. “It was basically everyone just asking when we could do it again, and they wanted to make sure they could make it this time or come back and see it.”

Hensley approached Zuniga about writing the musical mid-2015. She knew she wanted to do a Queen tribute, but she was also looking for something more. Hensley told Zuniga she wanted the performance to be a gender victory in some way but needed some help doing it the right way.

Zuniga, who identifies as queer and whose partner is trans, said she fleshed out Hensley’s idea with the intent of not “appropriating” the story but telling it in a way that was genuine to the trans experience.

She sought guidance from her partner and Warner, making sure they got the story right. Zuniga said she did a few rewrites after consulting them.

The production has had an impact on the cast as well as audiences. Zuniga said the first time they read through it, everyone cried. Just rehearsing through the story, Hensley said, has made those involved a tight-knit group.

Everyone is wholeheartedly immersed because King of Queen is touching on a personal level.

“It’s been a different experience having a show that not only moves when we perform it but when we rehearse it, it tears us apart and brings us closer together,” Hensley said.

Zuniga, who described the tone of the play as “victorious,” said she actually did another rewrite after their first reading because she realized the musical was too sad. It’s understandable, considering Queen’s catalogue includes heartbreaking songs like “The Show Must Go On” and “Too Much Love Will Kill You.” 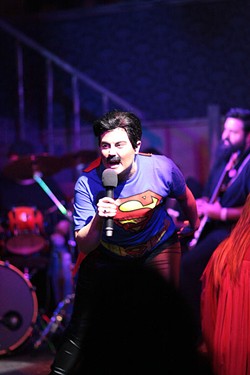 “If you try to flesh out some storyline that would lead up to some of those songs, you’re like, ‘This is depressing,’” Zuniga said.

Queen’s place in the modern musical landscape is intriguing. On one hand, the band’s music has become an absolute staple at sporting events or in bars. Songs like “Another One Bites the Dust” are guaranteed winners at karaoke night, but in the context of Mercury, his own orientation and the time period he was in, Zuniga said his celebratory lyrics represented people who were not seen as being powerful or even acceptable.

Yet Queen’s place on top of the stadium rock mountain is also part of what makes King of Queen such an enjoyable experience.

Even if you think you are not familiar with Freddie Mercury’s music, you probably are. As emotional or heartbreaking as some songs might be, Queen’s music also can be overwhelmingly triumphant.

“It speaks to your heart,” Hensley said. “Like, Queen is rainbows and unicorns and dragons and sunsets, you know? Freddie Mercury is the king of Queen.”

Hensley said her preparation for her role as Mercury has helped put his music in a special place in her heart.

“I’ve been watching videos, listening to interviews, watching his mannerisms,” she said. “It’s more turned into a hobby. Now I’m researching and looking up all this stuff because he’s such an amazing person.”

Zuniga said it means a lot to her that King of Queen was brought back for an encore. She felt it might be risky doing a play like this, especially in Oklahoma.

She said she was also nervous about writing a fictional story like this one because for many trans people, including those in the cast, it’s their actual story.

But the feedback has been positive from nearly everyone.

“It’s like everyone’s story in the sense that it’s about heartbreak and triumph and feeling like you’re at the end of what you can handle and then being able to go on because you have somebody that you believe in or believe in some idea more than your own self,” Zuniga said.

Tickets are $15, available at ticketstorm.com.

Print headline: Rhapsody reprised, The King of Queen triumphantly returns as a celebration of Freddie Mercury and self.

The King of Queen