In honor of the 50th anniversary of his untimely passing, National Cowboy & Western Heritage Museum is displaying the largest collection of artist Jerome Tiger’s works. 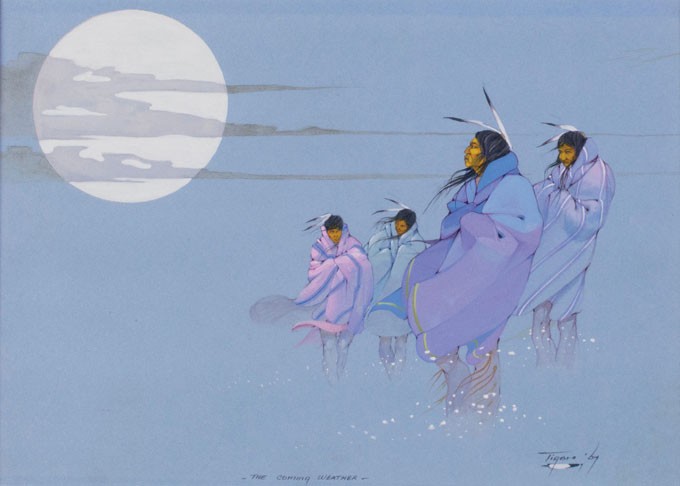 It has been 50 years since the unexpected passing of celebrated Oklahoma artist Jerome Tiger, who, by the time of his death at the age of 26, placed work in the Smithsonian Institution and influenced generations of Native American and Oklahoma artists.

In honor of the anniversary, the National Cowboy & Western Heritage Museum, 1700 NE 63rd St., has established the largest collection of Tiger’s work for an exhibit that runs through May 13, 2018.

The 148-piece collection showcases Tiger’s deft eye for painting everyday life of the Muscogee Creek-Seminole people. The Tiger name has lived on in the work of his daughter Dana, who was 5 years old when her father died of an accidental gunshot wound to the head, and has become an artist while establishing the Tiger Art Gallery.

“I love that my father, after 50 years, is still talked about and sought after as an artist,” Dana Tiger said in a phone interview with Oklahoma Gazette. “He invented something that no one had seen before, and that lives on forever. I’m thankful that the museum has a collection to showcase for the world to see. Everyone that sees it is impacted by it.”

Dana Tiger attended the opening ceremony for the exhibit in September and said she became overwhelmed. It was the first time she had been in one place with so many works done by her father.

“I had something like a spell come over me,” Tiger said. “All of those people and his work to be there was very powerful for me. His presence through his art is very noticeable, and I think of him as being close to me all the time.”

Eric Singleton, curator of ethnology, said this exhibit is the museum’s first dedicated to Tiger in over a decade and nothing before approached the size and scope. He said he wanted to put together a collection of this size because of Tiger’s impact on Oklahoma art.

“He was utterly unique,” he said as he pointed to Tiger’s piece “The Coming Weather,” which shows four Muscokee-Seminole members wrapped in blankets and looking at an unseen landscape.

“He doesn’t need a background like every other painter does,” Singleton said. “[Other artists] always needed to paint in that extra; he paints in the moment. Your mind infers it. It’s brilliant.”

Jerome Tiger was born in Tahlequah in 1941 and lived in Eufaula and Muskogee before dropping out of high school and joining the U.S. Navy and served in the Naval Reserve from 1958 to 1960.

He was encouraged by a friend to submit work to the Philbrook Museum of Art in Tulsa in 1962, and recognition of his talent was immediate. He was accepted into the art program at the Cooper School of Art in Cleveland, Ohio, the next year, becoming its first Native American student and first without a high school diploma. Tiger left the school after only three months after finding his creativity restricted, Singleton said.

“For a lot of artists, they can struggle for years, but within three years, he had art in the Smithsonian and he has pieces in every major art collection in Oklahoma,” Singleton said.

Many of Tiger’s works on display at the exhibit depict everyday life of the Muscogee Creek-Seminole, including traditional stomp dance, the making of sofkey (corn soup) and stickball, the latter of which is showcased in the work “Beginning to End,” which features a single stickball player flowing through all the motions of the game.

“All of the pieces, there are no mistakes,” Singleton said. “He never erased or painted over. It was one stroke and he was done.

“He was extremely impactful, whether it was solitary scenes or action; and the ways he brought forth some of these subjects, they have a poetic movement about them.”

Five of his pristine pieces were painted with his nondominate left hand after Tiger broke his right hand while winning a Golden Gloves match in 1966. He also painted works with his feet.

Dana Tiger followed in her father’s footsteps along with her brother Chris, who was murdered in 1990. She didn’t pick up her first brush until the age of 24.

“[Painting] was his natural gift, and he loved it,” Tiger said.  With me, it was not so easy; it was a lot of hard work. He had 26 years on this earth and didn’t waste a minute.”

Jerome’s wife Peggy, who died earlier this year, founded the Jerome Tiger Art Gallery to sell prints of his work, but it has expanded in recent years as Dana Tiger began to spread her wings.  Her uncle, Johnny Tiger Jr., who died in 2015, was also an artist.

“When people tell me they can see my father’s work in mine, that’s the ultimate compliment,” Tiger said, referring to the notoriety coming from the museum’s exhibit as a rebirth. “It’s all in honor of my father, uncle, brother and mother. I want to work hard and continue the legacy of teaching art and bringing our cultural awareness to the community.”

Jerome Tiger’s legacy lives on with Dana’s grandson, Aiden Jerome Tiger, who will turn 2 next year. Dana Tiger’s son and daughter also work as artists with the gallery.

“My grandson brings me so much to my lap,” Tiger said. “We named him after my father because every move we make is a result of something [my father] did.”

Life and Legacy: The Art of Jerome Tiger