The Loaded Bowl succeeds in jump to a permanent restaurant 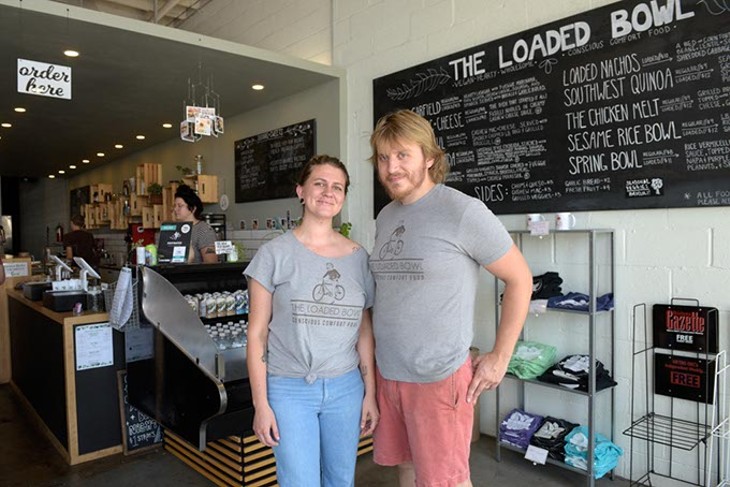 As owners Jon and Tevin Grupe looked to open a brick-and-mortar location for their successful food truck The Loaded Bowl, they found the perfect fit in the burgeoning OKC Farmers Market District.

In December of last year, after months of renovating the space at 1211 SW Second St., in which Jon Grupe built a bar and designed the tables, The Loaded Bowl opened to fanfare, but the transition from food truck to permanent restaurant did not come without its learning curve.

In the months since, not only has the restaurant seen its clientele increase, but they’ve been joined by other new establishments in the district, such as Rewind Pub, Silo and others.

“With our mission, [The Farmer’s Market district] seemed like the appropriate place for us,” Jon Grupe said. “We took a gamble on it because there wasn’t a lot of foot traffic during the day. It has worked out very well, and we’re excited about everything else popping up.”

Despite the lack of daytime pedestrians, customers used to following The Loaded Bowl through social media to find the location of the food truck turned up en masse to the new location.

“We didn’t make a big deal about opening because we wanted the staff to get used to the new operation, but it was crazy right off the bat,” Grupe said.

Part of the reason Grupe thinks his vegan concept has succeeded in the Oklahoma City market is that he wants it to be a vegan restaurant for people who aren’t vegan. Focusing on comfort food, dishes are prepared free of saturated fat and cholesterol, but they aren’t necessarily low-calorie.

“We pride ourselves in most of our customer base not being vegan,” Grupe said. “They just enjoy the food. From the get-go, we wanted to normalize vegan food and show people that it doesn’t have to be raw or low-calorie. It can be stuff with which you are familiar and tastes good.”

At the food truck, the menu was streamlined for a smaller kitchen space. Loaded Bowl’s cashew mac and cheese has become one of its signature dishes. Made using soaked cashews blended into a paste along with nutritional yeast and other spices, the cashew cheese mimics dairy but also provides a savory kick to many of the items on the restaurant’s menu.

Moving into the new location meant The Loaded Bowl’s staff went from essentially two — Jon and Tevin Grupe — to a total of 20 people and all of the added hurdles of managing extra taxes and keeping a staff happy, but that was expected. 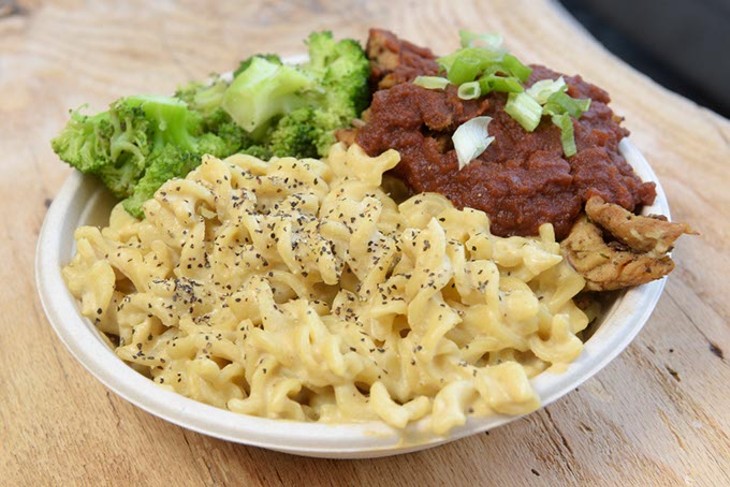 The Grupes didn’t anticipate their first major hurdle of the expansion: the menu. In the small kitchen of the food truck, The Loaded Bowl succeeded with four items, but with the extra space in the restaurant, it immediately expanded to a big menu with burgers, breakfast, sandwiches and salads.

“About a month in, we realized we didn’t have the space to do that kind of thing,” Jon Grupe said.  “It was decreasing our accessibility because ticket times were so high since we had so many items. We had to make the tough decision of cutting almost half the menu and changing it to just bowls.

“We tried our best to come up with three or four new bowls that nobody had seen before to offset the disappointment. After a month or so, it leveled off and people got used to the new menu. We’re able to be more efficient with it, and it helps us ensure that we can pay our staff well, not to have too many people on at the same time.”

Burgers are available as a special every Thursday night 5-9 p.m., and breakfast is available in the form of brunch on Sundays. Social media posts on Instagram show other daily specials as they happen.

During the menu consolidation, the flavors of a few of the popular but disregarded dishes continued their life in a new permutation. A popular chicken melt sandwich is available as a bowl with grilled brown rice, veggies, tofu, spinach, cashew cheese, squash relish and guacamole.

All chicken on the menu is made from Butler brand soy curds, and chorizo is mimicked with lentils. The opening of the restaurant also meant full-time baked goods, which can be paired as dessert or with an alcoholic drink from the bar.

Originally from Oklahoma City, Jon Grupe didn’t embrace a vegan lifestyle until moving to Chicago for four years. He moved back to Oklahoma at the start of this decade with the idea to open a food truck. He took a job at another truck to learn the ropes and met his future wife Tevin at a Beach House concert in 2011, and she immediately joined in on his food truck concept.

“The perception of veganism in Oklahoma was skewed. I felt like with the kind of food I could make, I could change perceptions and run a business at the same time,” Grupe said before noting that he is a big fan of venture capitalist Elon Musk.

Grupe follows Musk’s philosophy that it is easier to make someone change through a quality product rather than beating them over the head with statistics.

“You don’t have to talk about the benefits of veganism or beat people over the head with climate change statistics and get people defensive,” Grupe said. “You can just give them good food and it is a win-win.”