The Magnificent Seven is a fun, if limited, ride

How has Denzel Washington not been in a Western before now?

My guess is that a director has never before been willing to put him where he should be: leading a group of shaggy ruffians with the same disdainful, powerful pathos that he has used to lead groups of men throughout his entire career. The time period has changed, but his power hasn’t.

The stumpy town of Rose Creek, waiting for the rickety church to crumble and disturb its rural residents whose work ethic hasn’t wavered since homesteading days, will be familiar to those driving through rural Oklahoma. When a violent businessman hires a posse to bully the town into submission for its proximity to lucrative mining ground, a search for saviors leads to the ragtag seven.

A widow played by Haley Bennett acts as the weary quest-giver to the cowboys, but her anger is so buttoned-up and her character so slim that she’s a plot device more than a person, especially when compared to the indulgent pleasures of the seven.

Ethan Hawke and Washington have such a great rapport with director Antoine Fuqua — after starring together in Fuqua’s breakout Training Day — that they can take risks, like Hawke’s weird, grimy grin and alcoholic waltz, or play totally familiar, like Washington’s in-control black-man-in-black, and still seem appropriate for the world in which they exist. Vincent D’Onofrio’s Bible-thumping, squeaky-voiced mountain man is one of the wackiest performances of the year while Byung-hun Lee breaks away from GI Joe roles and transforms into a completely charismatic action star. 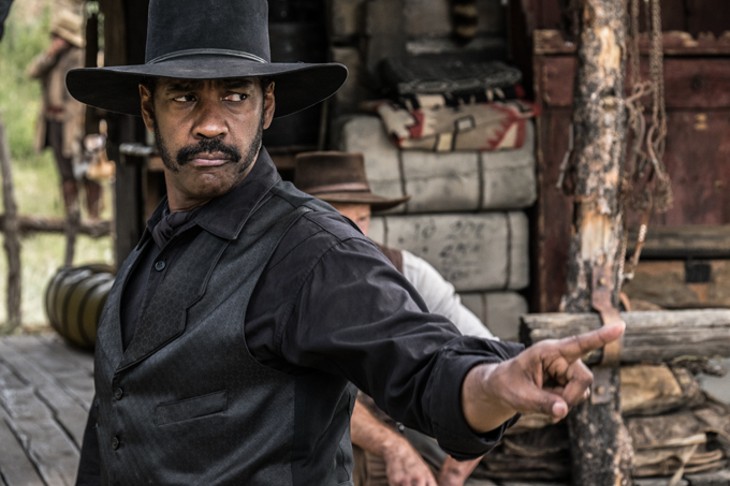 Lee’s blend of elegant physicality and deadpan delivery creates scenes of Jackie Chan-like chuckling wonder, most notably when he teaches farmers how to use knives to defend themselves.

This is also one of the few Westerns in which an actor’s ethnicities match their character’s. Martin Sensmeier is Native American, though a different tribe (Tlingit and Koyukon-Athabascan) than the underwritten part he plays in the film, while Manuel Garcia-Rulfo, playing Mexican outlaw Vasquez, was born in Guadalajara. The only disappointment in the cast is Chris Pratt, whose delivery is stifled by an affected drawl and a performance weakened by an emphasis on card-trick showmanship.

The cast is so strong that their ribbings and reaction shots take over the film. It helps that it’s edited so quickly that we become accustomed to either being in a whip-fast comic situation or a sharp, inventive gun battle. I had so much fun at times that I wished it was a straight-up action/comedy romp like the Pirates of the Caribbean series, but True Detective writer Nic Pizzolatto’s script wavers too often into pretension for it to be a completely riotous adventure.

The height of this navel-gazing comes when a particularly wordy soliloquy tumbles from the sneering mogul played by Peter Sarsgaard. The jumbled philosophizing highlights the difficulty in bridging the gap between goofy, over-the-top action and intense moralizing between capitalism and god. That speech makes the film’s obvious themes text: The scrappy friends are always good, foregoing the law and beating back organizations from which they see only corruption and the machinations of ultimate greed (and from this, evil).

Quentin Tarantino’s Django Unchained wants you to know that it’s heightened fantasy. That’s why it brutality works with its humor. Both are outrageous. Fuqua’s Old West is still a bit too narratively metered and self-important to comfortably house the rambunctiously fun bronco trying to buck its philosophical rider. But what a ride it is.

Print headline: Wild ride, The new remake of The Magnificent Seven features a talented cast with Denzel Washington at the helm in a cowboy hat.