The Meat Market Refectory heaps its food with attention and care

Rarely has someone put the kind of care and precision into a restaurant as The Meat Market Refectory co-owner Steve Spitz.

Speaking to Spitz about the restaurant at 2920 NW 63rd St. is entrancing. Months before it opened, the way he spoke of the look and feel was specific. His descriptions of the food made people drool.

The countdown to opening day (and the six months after, before Oklahoma Gazette could review it) were excruciating.

If anything made people pause, it is the logo. Friends who do branding and design said they couldn’t eat there, which is a bit much. And it’s their loss, because if you get past the overlapping blue and gray Ms and R, you will find one of the best restaurants in the city.

The exterior and the sign don’t do the inside of the building justice. It is beautifully designed and immaculately kempt. Somebody loves this restaurant, and that makes it easier for everyone else to love it, too.

There are no dress codes at Refectory, but it’s a place gentlemen might feel more comfortable wearing a pair of slacks and a button-down shirt.

Servers come in pairs, which is good for keeping glasses filled, but it can get a little crowded.

It might be better to have too much attention instead of too little, but it’s nice to have a few minutes alone with your dining companions before you’re approached about another glass of wine or how everybody is enjoying their entrees.

That said, you probably will want another glass of wine. Oenophile friends excitedly pointed out the fairly extensive wine list, including several “good buys” on some hard-to-find bottles. Ask your server, too. Mine were eager to share their opinions on pairings for different meals and tastes.

But even if you’re not a drinker, there’s a lot to recommend at Refectory.

The lump crab cakes ($19) are divine. Nobody’s sure why crabs are so lumpy to begin with, but maybe that’s how the mild sweetness is concentrated into the meat. 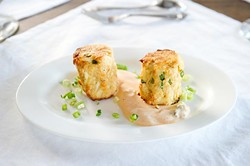 If you’re willing to share these, consider marrying whoever you’re with because that’s true love.

Carnivores are required to order the grilled Australian lamb chops (half rack for $18, full rack for $32).

Cows must have the worst public relations team in America, because the other animals seemed to have convinced most of us that cows are the only red meat we can safely enjoy.

Well, bull. If you’re fussy about eating sheep, a bite of these lamb chops is just the thing to help you get over it. The bone-in bites are tender, juicy and packed with flavor that had me gnawing for every last bit of meat.

They also can be ordered as an entree, including sides, for a bit more — $26 for a half rack and $38 for a whole — and it might be the best decision you make all day.

I feel similarly about the Duroc pork chops ($31 for 12 oz.), which are leaving the menu. It’s a shame, too, because it’s rare to find a piece of pork so perfectly cooked. Slightly pink, as it should be served, they are worth a visit as soon as possible. 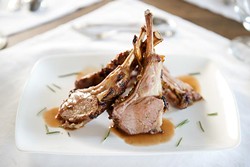 Of all the luck, another dish I tried is also making an exit: jumbo sea scallop scampi ($34). The scallops are enormous, but I can understand they might be a hard sell in Oklahoma City. Hopefully this one, made with fresh tagliatelle pasta and a champagne lemon reduction, will return as a special.

Refectory management says it’s the only organic-based prime steakhouse in the city, and I’ve had plenty of confirmation from other diners that the steaks are top-shelf.

However, Spitz’s pride and joy is the chicken-fried steak ($26) with Hatch green chili gravy. Made with a New York strip steak that is dry-aged for two weeks and wet-aged for another three weeks, it’s tender enough that you really only need the edge of your fork to cut it. This truly is elevated comfort food.

As for sides ($6 for those not included with an entree), I recommend the mashed potatoes, which are made with care and infused with tons of buttery flavor. The roasted beets were also quite good and had a deep, earthy sweetness.

The Meat Market Refectory lives up to the hype.

Once people get past the sign outside, they’ll find one of the city’s best fine-dining establishments waiting to serve an exceptional meal.

What works: It’s hard to beat the perfectly cooked lamb and pork chops.

Tip: For $12, a bowl of Hatch green chili and pork stew is gourmet on a budget.