The metro celebrates Independence Day with live music and fireworks

It’s the big No. 241 for the grand ol’ United States of America, meaning it’s time to light fuses and strike up bands. Central Oklahoma knows how to unfurl the red, white and blue for Independence Day, and with July Fourth hitting on Tuesday this year, the fun and fireworks begin this weekend and carry through to the big birthday date. Here are some of the best and brightest city and metro-area communities that will fill their parks and public spaces with the rockets’ red glare.

The gates open at 6 p.m. Admission and parking are free, and entrance to State Fair Park is available through gates 5 and 6. Visit okcphil.org.

Edmond’s LibertyFest gets a jump on the patriotic festivities every year, starting in the last week of June with kite festivals, park concerts, a rodeo, car shows and more continuing through the big day. At 9 a.m. Tuesday, the LibertyFest Parade will attract more than 50,000 guests to downtown Edmond.

The party continues at 6 p.m. with Parkfest on the University of Central Oklahoma (UCO) campus, 100 N. University Drive, featuring rides, inflatables, a cliff jump, music, toddler activities and more. Chosen by CNN and USA Today as one of the Top 10 Fourth of July celebrations in the country. LibertyFest culminates with a 9:30 p.m. fireworks display at UCO. Admission is free. Visit libertyfest.org.

A daytime festival in the shadow of the Wheeler Ferris Wheel, the Red, BRIGHT and Blue Festival features food trucks, The Big Friendly Craft Beer Bus, pop-up shops and gelato and snow cones 2-9 p.m. Tuesday at Wheeler Park, 1120 S. Western Ave. In addition to the food and fun, Casey and Minna fiddle and guitar duo performs 4-8:30 p.m. on the main stage. Fireworks start at 9:30 p.m. Admission is free. Visit wheelerdistrict.com. 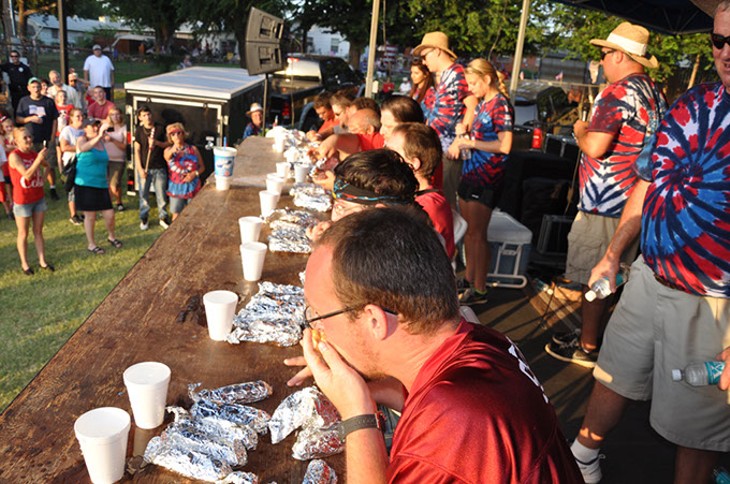 At 8 a.m. Tuesday, children ages 8-13 can test their endurance in the Cherry Bomb Triathlon, in which contestants in separate age groups will swim, bike and run to the finishline. The triathlon begins at City Splash public pool in Yukon City Park. Admission is free.

Midwest City’s free, family-friendly Tribute to Liberty kicks off at 6 p.m. Tuesday with music by the 100 Bones Band, followed at 8:30 p.m. by Dr. Irv Wagner’s Concert Band. Fireworks begin at 10 p.m. Guests are encouraged to bring picnics and blankets.

It all happens at Joe B. Barnes Regional Park, 8700 E. Reno Ave., in Midwest City. In addition, Uncle Sam and Lady Liberty will be strolling through the park on stilts beginning at 7 p.m. Visit midwestcityok.org.

The City of Moore’s A Celebration in the Heartland starts at 10 a.m. Tuesday with arts and crafts, food vendors, inflatables, winery displays and $40 helicopter rides at Buck Thomas Park, 1903 NE 12th St. Music performances by Hook and Stars precede a massive fireworks display at dusk. Admission is free. Visit cityofmoore.com.

The DIY spirit is alive and well in Mustang, which allows people to shoot off their own fireworks 9 a.m.-11 p.m. at Wild Horse Park, 1201 N. Mustang Road. It is legal to light and sell fireworks in Mustang through Tuesday, so this is the most libertarian of liberty celebrations. Admission is free. Alcohol is prohibited, though. Call 405-376-3411.