The Oklahoma City art community suffered an irrevocable loss with the death of Spencer Mellow in 2015 following his lengthy battle with addiction and mental illness.

His mother Patti is making sure the memory of her son is not forgotten while ensuring other families have access to the kind of treatment and counseling the Mellows never received.

Mellow is co-chairing a fundraising luncheon for Teen Recovery Solutions, the state’s only sober recovery high school, which has become a model other facilities across the country are following.

“Spencer started having difficulty in high school, which is an environment that makes it difficult to recover,” Mellow said. “Once Spencer would start drinking, he couldn’t stop. At school, it was an environment where you were made fun of if you didn’t drink. To have a sober high school where kids don’t have to have shame makes a huge difference.” 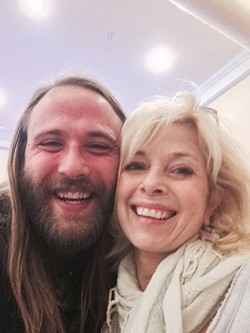 Teen Recovery Solutions opened its doors in 2006 and is an accredited school for 20 teens with room for their families. It was originally established a scholarship so teens could get residential treatment.

“There weren’t a lot of residential treatment options in Oklahoma City, so people were having to send their kids out of state,” said Maggie Brown, Teen Recovery Solutions’ director of development. “Once they’ve returned home from treatment, they didn’t have continual support, so they were relapsing into even deeper abuse and treatment wasn’t good long-term.”

The school was modeled after Houston’s Archway Academy, which combined clinical treatment that involved families with providing a positive and sober environment for teens among their peers.

Teen Recovery Solutions took all of Archway Academy’s programs and put them under one roof, which Brown said is now a model for the rest of the country’s 40 sober high schools.

“The science behind treatment and counseling also shows that if you give students fun things to do, their mind is occupied and they have a positive social network,” Brown said.

Mellow was not able to enroll her son into the program; he was too old when it was founded. The family pursued treatment outside of the state, but it did not involve other members with discussions of mental illness, and once Spencer came back to Oklahoma City, it was a similar cycle.

“If you just throw money at alcohol addiction without realizing the mental health issue, you’re missing the point,” Mellow said. “Had we had that kind of counseling [at Teen Recovery Solutions,] we might have understood what he needed. … It’s hard for people to understand that it is a disease and not a choice.”

Mellow said her son was not diagnosed as bipolar until after graduating high school at an out-of-state rehabilitation facility. She said the disconnect between treatment and the family impacted how they helped in his recovery.

“He just knew that he couldn’t stop drinking and didn’t feel comfortable in his own skin, Mellow said. “It was how he would self-medicate, to keep himself from feeling terrors of the disease.”

The power of storytelling will be on display during the Reclaimed 2017 fundraiser luncheon 11:30 a.m.-1 p.m. Thursday at Oklahoma City Golf & Country Club. Mellow will chair the event along with Dr. Susan Chambers and keynote speaker Marianne Trigg, Teen Recovery Solutions original executive director.

Mellow will pass out notecards emblazoned with one of her son’s works, a bright and colorful buffalo that he affectionately referred to as “puppy.”

“I want to do things like that more and more,” Mellow said. “I want to keep his work alive. The day of his first gallery opening, he was drunk and crying in his truck because he couldn’t accept success. It was so frustrating to have such a talented person not believe in themselves.”

Mellow will share her story, and other members will provide details of empowering stories of recovery during the fundraiser for the school, which does not receive state or federal funding.

“It takes a lot of guts to get up there and share something so personal,” Brown said. “But that’s what makes it so special and impactful.”

Mellow said she hopes the fundraiser will fund scholarships for Teen Recovery Solutions to help other families in need that would not have access to the program otherwise.

Teen Recovery Solutions is housed in a building donated by Chesapeake Energy Corporation. Brown said the school’s enrollment is currently capped at 20 students, which also includes room for their families.

“Our space can be limited, and we’d like to grow beyond,” Brown said.  “We’ve been sustainable in this model, but we have to increase the amount of fundraising to grow. It’s why these events are so important.”