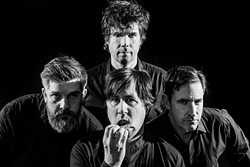 Peter Hughes said there is no need to feel sorry for the many post-punk and new-wave musicians of the 1980s beached ashore by the ever-shifting tide of pop culture’s restless ocean. The Mountain Goats bassist thinks society’s changing tastes might have helped force some of them into greater things.

Hughes spoke with Oklahoma Gazette ahead of the Southern California indie folk/rock band’s tour stop July 13 at ACM@UCO Performance Lab, 329 E. Sheridan Ave. The quartet is chiefly known for the songwriting of founding member and creative mastermind John Darnielle. The vocalist, guitarist and keyboardist is never one without a theme.

The band’s 2005 album The Sunset Tree is, for example, a touching tribute to Darnielle’s family and childhood home. Beat the Champ is The Mountain Goats’ 2015 ode to the romanticized world of professional wrestling. Its most recent album Goths, released May 19, looks back at the songwriter’s youth in California as a Joy Division devotee far removed from the bleak gothic aesthetic from which the best English post-punk bands were emerging.

Bands like Bauhaus, The Sisters of Mercy, Siouxsie and the Banshees and The Cure found a niche in the late ’70s and ’80s, but changing fashion and the popularity of grunge and industrial subgenres into the ’90s gradually withered the commercial appeal of the music and subculture that became known as goth.

That decline is the subject of “Shelved,” the 10th track on Goths and the first Mountain Goats song that features Hughes as an assisting songwriter and lead vocalist. Darnielle guides the first part of the tune, which is a musician’s somber reflection on changing eras and sounds and the incessant pressure from music industry executives to keep up with the times.

The musical tone brightens as the song progresses, and Hughes delivers a happy ending, describing a rocker who used an “in” with a friend at LucasArts to launch a new career.

“I’ve thought that a lot of [new wave musicians] probably became programmers and went on to make more money than you and I will ever see,” Hughes said.

The theme of each Mountain Goats album is solely driven by Darnielle’s creative whim. The act began as the songwriter’s solo project. Darnielle released six records under the moniker before adding Hughes full-time in 2002 with a rotating cast of performers to form a band.

Hughes said while Darnielle again came up with the new album’s concept, Goths felt like a record that was written with the bassist in mind. The two musicians grew up near Claremont, California, listening to KROQ-FM, the area’s alternative, new wave and post-punk station of the time.

One of the first songs Darnielle wrote in what eventually became Goths was “Andrew Eldritch Is Moving Back to Leeds,” which references the Sisters of Mercy founding member.

Darnielle shared it with Hughes and said he was thinking about writing an entire album about growing up in the goth subculture.

It is important to note that while Goths is thematically about the new-wave and post-punk era, it is not a throwback record. While some songs give instrumental or compositional nods to its inspiration, Goths largely carries an indie-pop sound delivered with singer-songwriter sensibilities.

“If you did make an album that was all goth and it sounded like it was recorded in 1984 with drum machines and really reverbed guitars and chorused-out bass,” Hughes said, “that would be pretty obnoxious after about three songs.”

Before a 2012 show at Tulsa’s historic Cain’s Ballroom, Hughes told music journal No Depression that Darnielle, while largely influenced by bands like Joy Division and New Order in his youth, was “allergic to anything kind of ’80s retro” and detested anything that “smacks of” pandering nostalgia.

Hughes told the Gazette that Darnielle still carries these same sentiments, which the musicians share. Goths is about what it was like to be in a particular place at a particular time, not an attempt to revisit an old sound.

“With these songs, it’s about goth,” he said, “but it’s more in the subject matter than in the form.”

Hughes said growing up around the Los Angeles new wave and post-punk scene was a unique experience worth sharing in album form. To him, goth seemed like a reaction to Southern California’s overarching preoccupation with movie stars, palm trees and sunny beaches.

“You see something like this dark, menacing music that sounds really sinister, and it’s coming from this place that — in your imagination — is just cold, gray and with black, crumbling factories,” he said. “That’s just the polar opposite thing [to Southern California], and of course that just seems completely and impossibly romantic.”

The band recorded the groundwork for Goths’ opening track “Rain in Soho” before arriving in Nashville, Tennessee, where the bulk of the album was made. With a chance to add more to the song, Hughes reached out to the Nashville Symphony Chorus and asked if it could send a few singers to the studio.

It obliged, and 16 soon arrived. The result was an epic chorus that added some sinister darkness — and a theatrical nod to The Sisters of Mercy — to one of the few album tracks that truly broaches the goth genre.

“They came in, and it was incredible just being in the room,” Hughes said. “It’s one of those things where it sounds cool on the record, but unless you go to church a lot or have the experience of being in a room with a bunch of people who can really sing, it’s so powerful.”

Goths stands out in The Mountain Goats’ oeuvre as the first album that does not feature any guitar, other than Hughes’ bass. The band’s early incarnation was performed mostly in acoustic style, but lately Darnielle has shifted to writing songs on keyboard, saying an instrument change keeps him creative.

Hughes said the lack of guitar wasn’t a conscious decision. The band was almost three-fourths through recording the album before anyone realized its absence, as the band had used less and less guitar in the projects leading up to Goths.

Hughes said he usually does not care about an album’s critical reception but was interested in it this time to see if anyone would pick up on the musical differences. The response to its release has been as positive as it is affirming.

“I wasn’t actually really sure that anyone would notice,” he said, “but it seems like people have.”

Print headline: Black sheep, The Mountain Goats revisits a past era while pushing its sound into the future on Goths.

The Mountain Goats with Samantha Crain