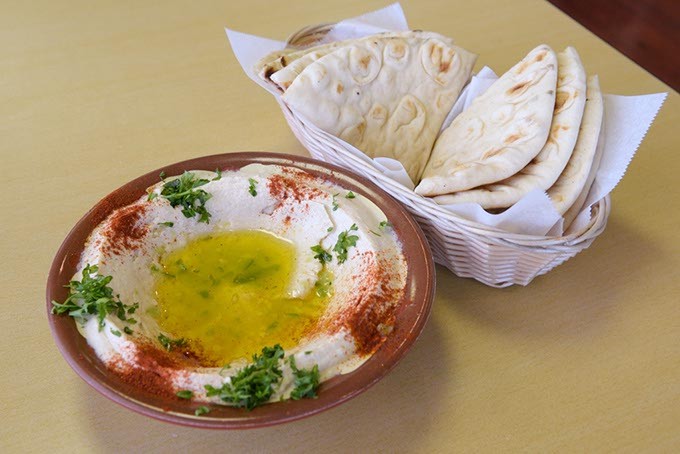 Along one of the Oklahoma City suburb’s busiest thoroughfares is a shopping center at 15th Street, and inside that center resides a little restaurant. Step inside it and the outside world fades away. The music and tastes of the Middle East await visitors at Jerusalem Mediterranean Cuisine, 38 E. 15th St.

The venue is bright and inviting, and shades on the windows give it an airy feel. Additional light comes from the kitchen, where cooks contend with occasionally roaring flames as they prepare a perfectly charred dish over an open fire.

Remember in It’s A Wonderful Life how every time a bell rings an angel gets its wings? It’s kind of like that at Jerusalem, except every time you see a burst of flames, you know somebody is getting a beautifully cooked kebab.

But first, let’s talk appetizers, because you’ll need some time to ponder the full menu. For a party of two, order hummus ($4.99). The seasoned chickpea dip is ridiculously smooth and includes a pool of flavorful olive oil in the center. Use a piece of pita bread to stir it together. The flavor is a little grassy and slightly bitter, and its texture is luxuriously creamy.

Stuffed grape leaves appetizers are worth ordering, even as an entrée (six for $4.99). Each is stuffed with rice and vegetables and cooked in olive oil and lemon juice. The texture is crisp but forgiving. The flavor is slightly tart and habit-forming.

The fatoosh salad’s ($4.99 small, $7.99 large) lemon and olive oil dressing was fine, but the salad seemed like the usual house mix with toasted pita in place of croutons. Instead, I recommend Jerusalem’s take on tabbouleh ($4.99 small, $7.99 large) salad with freshly chopped parsley, tomato and mint mixed with a little fine-ground bulgur wheat. Too much wheat makes tabbouleh dry and heavy. This version is lovingly seasoned and full of bright flavor.

Now that appetizers have arrived at the table, it’s time to decide on an entrée. A gyro sandwich ($6, or $9 with fries and a drink) is an easy choice. But after seeing all those flames earlier, it’s tempting and perfectly acceptable to order a tender kebab.

The best of the best is chicken tawook ($12.99, including salad and rice), which is marinated and seasoned before going over the fire. The kebab skewers are presoaked, too, which helps later on when you pull away the delicate meat to eat it. The experienced hands in the kitchen rotate each skewer so the outside is golden and lightly charred and inside is moist and exquisite.

Kofta (or sometimes kufta), meatloaf-like meatballs, require great ingredients and skills to prepare correctly. If the meat is overworked, it gets tough and dry. If it isn’t seasoned right, the beef is bland. Jerusalem’s kofta is juicy, tender and flavorful.

Beef kebab ($14.99) is straightforward, with two skewers of tenderloin served with rice and a salad, but I thought the marinade overpowered the meat’s delicate flavor. A better choice is lamb shank ($14.99), which has a more powerful taste and a bit more tang. It’s so tender that simply brushing a fork against it is about all it takes to get it ready to eat.

Guests can upgrade from the entrée-included rice to hashwa or mojaderah for $2.49 more. Hashwa is rice cooked with ground beef, almonds, pine nuts and (for an additional 69 cents) raisins. I’m not a fan of raisins in things, but they are integral to hashwa. The added sweetness makes this side dish pop.

Mojaderah is steamed rice with brown lentils and caramelized onions, and it’s a lot earthier. It needs something spicy or sour to make it a must-have. That’s a minor quibble, though, because the bulk of Jerusalem’s menu is so good, it’s almost impossible to choose one dish.

Thankfully, Jerusalem is close enough that customers can take a trip to try everything it offers. As it’s open six days a week, no plane ticket is necessary. Find the venue’s Facebook page online by searching “Jerusalem Mediterranean Cuisine.”

What works: Kebabs are great, especially the chicken tawook and kofta.

What needs work: Mojaderah is earthy but needs hot sauce or citrus to liven it up.

Tip: It’s closed on Mondays, despite what the online menu might show.