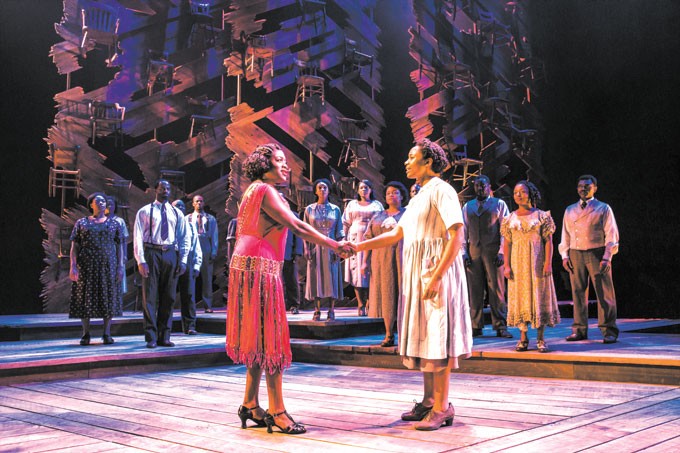 The national tour of the Tony Award-winning Broadway revival of The Color Purple is set to kick off 2018 for OKC Broadway.

Most people know The Color Purple through the star-studded 1985 film, which was directed by Steven Spielberg and included star actors Whoopi Goldberg, Danny Glover, Oprah Winfrey and Margaret Avery. The stage show follows a similar story, of course, but those seeing the theater version for the first time will notice that it more closely follows the book.

Still, the premise is the same. Celie battles double oppression as a black woman in rural Georgia and must grapple with rape, violence, racism and sexism against herself and others.

The musical version of The Color Purple made its Broadway premiere in 2005. The show was revived on Broadway in 2015, winning a 2016 Tony Award for Best Revival of a Musical.

Carla Stewart, who plays blues-singing Shug Avery in the current touring production, was cast in the ensemble of the Broadway revival. The Chicago native was offered the Shug role shortly after the Broadway revival run ended. The role has a legacy for being played by talented singers — including Michelle Williams of Destiny’s Child and Jennifer Hudson.

Stewart recently spoke with Oklahoma Gazette about the differences between the stage musical and the film, her start in theater and how she perceives Shug.

Oklahoma Gazette: What was your first introduction to The Color Purple? Was it the movie version?

Carla Stewart: It was the movie. And then when I went to college — I went to AMDA, American Musical and Dramatic Academy in New York — we had to present a song that we would sing in musical theater. This was when I really sat down with the movie because I sang “I’m Here” in school. I wanted to go through it and really have some connection to the story, so I went back and really watched the movie. And then when I joined the company to do the stage version of it, I read the book, which has so much more insight. The book is really where we grab all of our information from for the stage performance. They’re slightly different — the movie, the book and then the stage version. But I think we kind of grab from it all.

OKG: What are the major differences between the film version and the book and stage versions?

Stewart: Well, there are certain songs in the movie that they want to hear in the stage version. I had the honor of meeting Steven Spielberg, who directed the film, and he said to us that he wished he had kept the moment of reconciliation between Celie and Mister at the end. Somehow, it was there, but at the end, it got taken out. He said that was such a powerful moment because you get to see a moment of true power when she forgives him of all the terrible things he’s done, which you would think is unforgivable. It happens right before you, and you can see the power that you have when you decide to forgive someone and let that go. She was completely healed and transformed, and I think it’s just a beautiful moment that’s different from the movie.

OKG: So Steven Spielberg actually came through to talk to you all?

Stewart: It was amazing. I mean, we got to meet his wife, and he came and spoke with us and stood onstage with us. It was just a beautiful moment. We had plenty of stars come, like Whoopi Goldberg came. This was all with the Broadway company. I’m looking forward to some people coming to see us out on the road.

OKG: What about you? Have you always wanted to be up on stage? Was that a life goal of yours?

Stewart: Well, I wouldn’t say a goal. I always wanted to sing, but I didn’t always know that I would be a performer in this regard. But I met this woman named June McClain — I always mention her in all of my interviews. She’s a playwright, and she has her own company in Chicago, which is where I’m from. It’s a Christian-based, faith-based performing arts thing. I was going to sing background for her and be one of her pit singers, and she had other plans. She said, “I really see something in you, and I would really love it if you read these sides for me.” I said, “Oh, I don’t think so; I don’t do that.” We went back and forth a lot, and she was like, “Here’s the thing: Either you read these sides, or you can have a nice day.” So quickly I turned over to the sides and said, “Oh, so these are the sides; I’m going to start at ‘start;’ that’s great. Let’s do this.” And that’s how it all began. 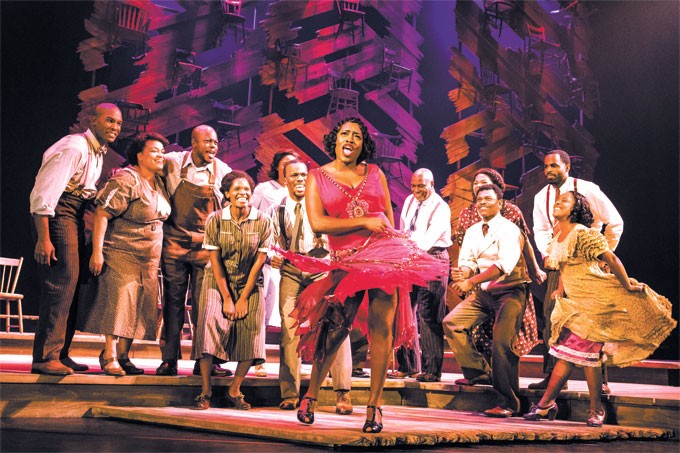 OKG: It’s cool that you say you wanted to be a singer. In the Shug role, you’re following some pretty great singers who have played that role: Michelle Williams, Jennifer Hudson. What’s it like following their footsteps?

Stewart: Of course it’s an honor. Both of those ladies that you just mentioned are Chicago, Chi-Town girls. And then Miss Heather Headley, while she’s not from Chicago, she lives there now. So I’m very honored to even be put into a category with those ladies. I’m also very confident in the gifts and talent that God has given me to add what I bring to Shug Avery.

OKG: How do you approach that character?

Stewart: Shug is very sassy and very bossy and kind of mannish, but she knows who she is. She knows the sex appeal that she has. She’s very gritty, but then there’s a very soft side to her that she usually doesn’t let people get to because that would involve letting her wall down. But in a subtle way, Celie is able to get to her, but it’s truly by being who she is.

OKG: And a lot of people have a very emotional connection to that story in general. Do you hear from fans who tell you that?

Stewart: All the time, we hear from people who say, “You really don’t know; this story changed my life. I talked to people I haven’t talked to in years. I’ve talked about things I’ve never spoken out about.” They would talk about this insecurity and how they’re now able to look at themselves and say, “I am beautiful.” We look out in the audience and we see people of different race and gender. We see strangers hugging and crying together and really making a connection. And I think that’s what our country needs now, to make a human connection.