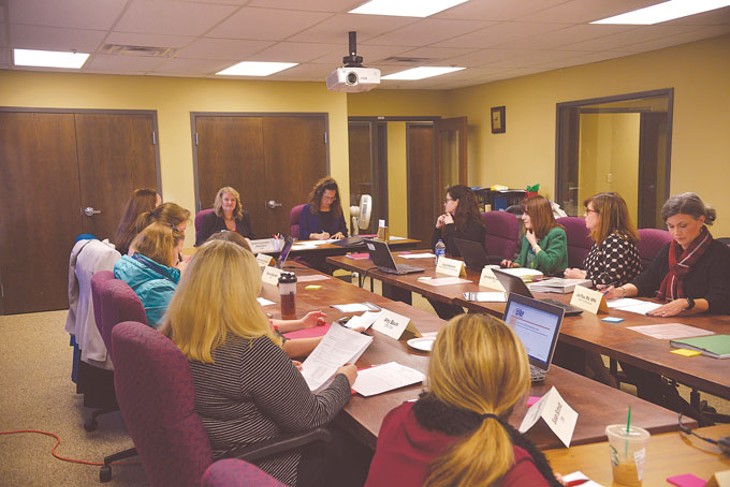 Oklahoma Commission on Children and Youth, a state agency whose mission is to improve services to children, has largely gone unnoticed by the general public in recent years. That’s not to say that the agency hasn’t continued to serve as a watchdog group monitoring the state’s various welfare programs, but its new director Annette Jacobi wants to bring visibility to the agency and the issues facing children and youth in the years to come.

The commission, which is often known by its acronym, OCCY, was once front-and-center in Oklahoma as a government agency tackling unacceptable conditions that plagued the state’s children’s institutions in the late 1970s and ’80s. Following the 1978 Terry D. v. Rader & Oklahoma federal court case that exposed abuse and neglect of children in the state’s care, state lawmakers created OCCY to provide oversight to the Office of Juvenile System Oversight, the Child Death Review Board, the state’s working group for Children of Incarcerated Parents and the Post Adjudication Review Board for the state juvenile court system. The lawsuit even spurred the creation of Oklahoma Institute for Child Advocacy (OICA), a nonprofit organization that advocates for policies that benefit the state’s children and families.

Since OCCY began nearly 35 years ago, its leaders’ focus has been on serving children and their best interests. The work has remained steady in a state that always ranks toward the bottom of the nation when it comes to issues surrounding child welfare.

“This organization has a rich history in looking out for systems,” said Jacobi, the former chief of Family Support and Prevention Service at the state’s Health Department, who was named the director of OCCY in December. “We are a wonderful safety net.”

“It is a great place to elevate issues, have tough conversations and really look at crossing-cutting issues that affect all agencies,” Jacobi said. “We know that if Terri White’s agency has fewer services for kids, that is going to impact Ed Lake at DHS, Steve Buck at OJA and the nonprofits. Together, they have the potential to bond together and support one another.”

Jacobi enters OCCY at a time in the state’s history when funding cuts are threatening to slow the pace of child welfare agencies. She is painfully aware that not only is OCCY operating with fewer staff members, but so is DHS, OJA, the Oklahoma Health Department and the Oklahoma Department of Mental Health and Substance Abuse Services. In Jacobi’s final months at the state’s health department, funding was cut entirely for child abuse community prevention programs, which she oversaw.

“It really slows down the idea of collaboration and partnerships,” Jacobi said of funding cuts to state agencies addressing children’s issues. “What I am seeing is that people are retreating and what systems we’ve worked to build are being dismantled. It is not intentional. Nobody wants it to happen. It is just the reality. I hope, here in this role, I will have opportunities to bring people together.”

An area of great opportunity for impacting the state’s children and youth is in the prevention or mitigation of the effects of trauma and adverse childhood experiences (ACEs), Jacobi said. The ACE test, which asks about childhood exposure to violence, drug and alcohol abuse, mental illness, divorce, incarceration and more, connects multiple yes answers to the increasing odds of later-life struggles in areas of chronic disease, mental illness and violence.

In a nationwide study released in 2014, Oklahoma had the highest percentage of people in eight ACE indicators, according to Child Trends, a nonprofit, nonpartisan research center. Also in the study, Oklahoma ranked No. 1 in the categories of children witnessing domestic violence and experiencing parental divorce. Oklahoma came in No. 2 in the areas of parents who have abused drugs and children who are victims of violence or had witnessed neighborhood violence.

“It is a call to action,” Jacobi said about the data and research on ACEs in Oklahoma. “What can we do to mitigate those circumstances? We know that the earlier we can intervene and create protective factors, children fare much better. If we don’t, we can typically guess the pitfalls they will encounter whether it is not doing well in school or turning to substance abuse or crime. Those things don’t have to happen if we intervene.”

Over the past year, a number of the state’s child welfare agencies, health organizations and nonprofits have initiated discussions on policies and practices to combat childhood trauma. Last fall, Rep. Pat Ownbey, R-Ardmore, hosted an interim study on ACEs and their impacts on Oklahomans. In November, at the annual OICA OK KIDS COUNT Conference, the keynote speech was devoted to ACEs.

“What we know in Oklahoma is that the field knows about ACEs; the general community does not,” Jacobi said. “We know that people want to work on this. How do we pool all the resources?”

That’s one of the many questions Jacobi and OCCY will work to answer in 2018.

Print headline: Youth focused; The new director of Oklahoma Commission on Children and Youth sees unique opportunities for the agency that serves as a watchdog group for child welfare.