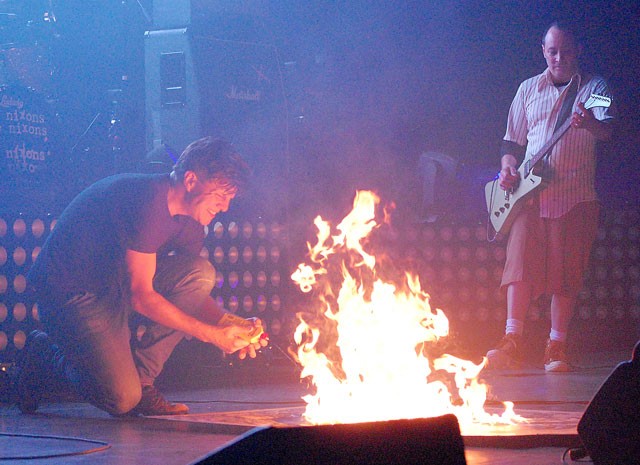 Who would have guessed that 2017 would be The Nixons’ year? Yet the recently revitalized Oklahoma City alternative rock band has not only experienced a strong return from a partial 15-year hiatus but is leading the way in a rock show big enough to literally shut the year down.

The Nixons held their first full reunion show in 15 years this March at the events center. The band — including vocalist and guitarist Zac Maloy, guitarist and backing vocalist Jesse Davis, bassist Ricky Brooks and drummer John Humphrey — has also performed a number of shows in the Dallas area, including in April at Edgefest in Frisco, Texas.

The Nixons are also scheduled to play with Bowling for Soup Dec. 29 at Dallas’s The Bomb Factory.

Aside from revisiting old favorites, there was new Nixons music to be heard in 2017, too. The band released its Song of the Year EP this year, a recording that includes one new track and a few other rare or unreleased songs.

Maloy, who now works as a songwriter in Nashville contributing to hits for artists like Carrie Underwood and Tim McGraw, said in a recent Oklahoma Gazette interview that they have been working with promoter Brent Brewer for a long while to put together a special New Year’s Eve show. It might be the last time many fans get to see the band for quite some time.

“We knew, ‘OK, we’ve got a little window here that’s going to be the last real opportunity for us to do some shows,’” Maloy said.

The Nixons spent a while scouting which bands might want to join them for the New Year’s Eve show. Maloy said once word got out about what they were working on, the concert took on a life of its own.

“Someone just mentioned it to the Hinder guys,” he said, “and they were like, ‘Hey, wait; why aren’t you talking to us?’”

Hinder also had a big year in 2017. The OKC hard rock quintet released The Reign, its sixth studio album and its second with current lead vocalist Marshal Dutton.

Maloy said he has worked with Hinder in the past through his career as a professional songwriter. Hinder also uses the same OKC rehearsal space as The Nixons.

There is a lot of synergy between the bands, Maloy said, so it is a wonder The Nixons did not come to them sooner.

“I kind of would have thought, ‘Oh, well they’re too big to do a co-headline. Why don’t they save up to do their own show a month later?’” Maloy said. “But they just jumped at it.”

Once Hinder came onboard, The Nixons started looking for another act to add to their New Year’s Eve celebration. Someone eventually mentioned to Maloy that Aranda might be interested.

“Aranda is legitimately my kind of music,” he said. “I listen to all kinds of music — I kind of have to with my job — but that kind of melodic, high-energy pop rock is super cool to me.”

Kelly Clarkson covered the Aranda song “All I Ever Wanted” for her 2009 album of the same name. That Clarkson album also includes Aranda’s “Whyyawannabringmedown.”

Maloy said he was introduced to the band around that time in hopes that they might write songs together. While that work never materialized, Maloy remains a fan.

The songwriter said he could not be more proud of the New Year’s lineup that has been assembled. If he weren’t in one of the performing bands, it is a show he would likely pay to see himself.

It is likely that there will be few Nixons shows in 2018 — if the group can manage to get any together at all.

Aside from working with The Nixons, Humphrey is also drummer for the tour-heavy South African band Seether, which took a few sustained breaks from touring and recording this year. The gaps allowed Humphrey to participate in the Nixons reunion shows.

Maloy said Seether plans to be much busier in 2018, which will  limit Humphrey’s availability. Maloy also has a few of his own projects for the year, though he plans a return to OKC in April for the third annual Oklahoma Songwriter’s Festival, which he helped found.

With a lot of other things going on, it will be hard for The Nixons to organize a show in the immediate future. But the band plans on making the New Year’s concert extra special. It has changed up the setlist and also plans on playing its newly recorded song.

On a night full of events, no other local New Year’s concert will rock as hard as this one.

“There’s fancy shows where you go and put your tux on,” Maloy said, “but not one where the singer of the band is going to light the stage on fire.”

Maloy wants to bid a proper farewell to the year that has treated The Nixons so well.

Print headline: Starting pure, The Nixons enlist Hinder and Aranda to burn down 2017 with a heavyweight rock show.