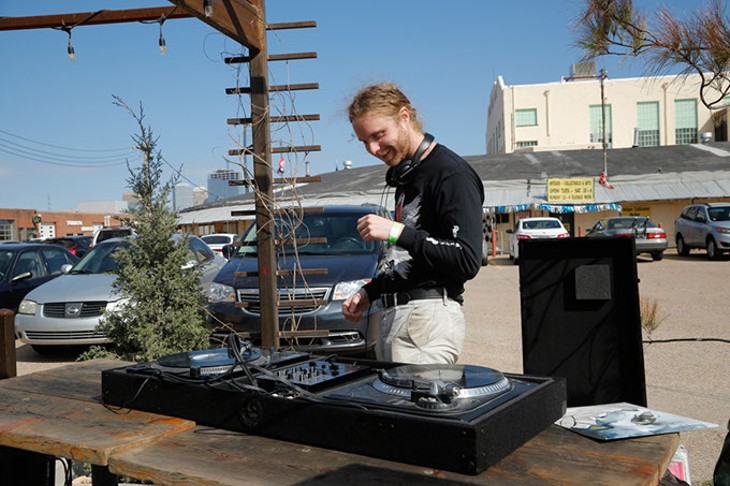 Taylor McKenzie flips through his inventory: a stack of vinyl records stored neatly in a large milk crate. The obscure selection of electronic, techno, house and avant-garde music is culled from labels and private distributors across the United States and Europe. Some lack cover art or anything that counts as commercial appeal.

“To me, that just tells me this is only about what’s on the record,” he said.

By day, McKenzie teaches German at Classen School of Advanced Studies. Many also know him as a skilled guitarist and fixture in Oklahoma City’s do-it-yourself punk and rock scenes. He started his small-scale Nowhere Affiliated record distribution service earlier this year, showing off his rare stock across the city at local shows and while performing as DJ Nowhere Sands. On weekends, guests can browse his collection in person at Warehouse B near OKC Farmers Public Market, 311 S. Klein Ave.

“You can’t find some of this stuff in any record store in all the U.S., and here I just have it in a box in my room,” he said. “It’s really kind of weird.”

McKenzie curates his collection directly from warehouses in places like Detroit and from record labels like London’s Where to Now? Records.

His goal is to deliver music that has yet to set firm roots locally to as many interested people as possible.

“The ‘Nowhere’ thing plays into the idea of being in a super overlooked city,” he said. “Not just overlooked, but even in the age of the internet, it’s hard to get your hands on new media.”

He admitted anyone with access to a web browser can find just about anything, but it usually takes some kind of outside encouragement for people to expand beyond what’s familiar to them.

McKenzie hopes having these eclectic genres and subgenres available in the city will spark curiosity about the sounds he first fell in love with while studying in Berlin as a Fulbright Scholar. While in Germany’s capital, he was exposed to a vibrant party scene that deepened his appreciation for ambient electronic music, separate from the trap and dubstep sounds that were more popular back home.

While passion for that type of music exists here, it’s confined mostly to household listening. McKenzie said there’s potential to expand its popularity.

“I’m really into the movement aspect of it,” he said. “I have this dream of a lot of people acquiring this type of media and projecting it out onto party scenes as an expression of themselves, even though they didn’t even make it.”

“To me, it’s unjust to not be able to access new music or to not have access to the avant-garde,” he said. “I think that’s really important to experience.”