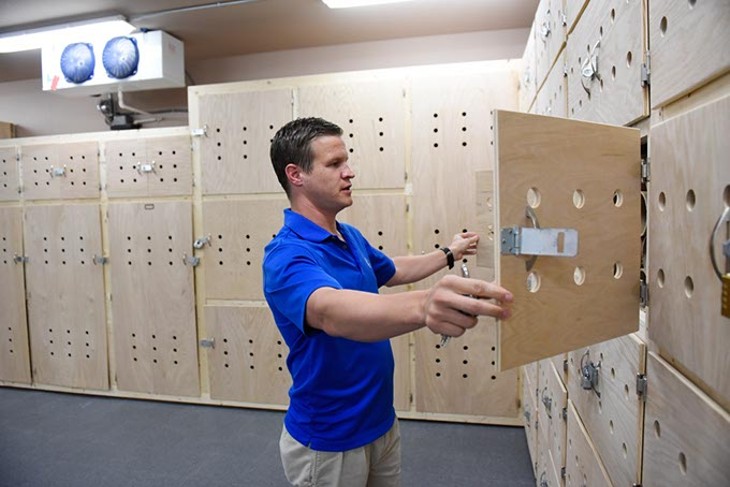 If you want something that doesn’t exist, you either wait for someone else to make it or you do it yourself.

Hunter Merritt is a do-it-yourself kind of guy.

When he wanted locally made spirits, he started the Prairie Wolf Spirits distillery in Guthrie. Now the company sells vodka, gin, coffee liqueur and (soon) whiskey.

When he wanted to find a place to store high-end, “cellarable” wines in Oklahoma City, he found there wasn’t anywhere for him to go. So he created The OKC Cellar, 7801 N. Robinson Ave.

“I went to school at [Southern Methodist University] in Dallas, and there was a facility like this that was very popular,” he said. “Every time they opened a new one, it would fill up immediately.”

Growth has been slow but steady at The OKC Cellar, with a few new members joining each week. The business has yet to advertise, but word is spreading as wine distributors and collectors began bringing friends in to see the operation.

Buzz in the front door and you’ll soon be standing in The Club Room. The multipurpose area is a laid-back lounge with tables and cushioned chairs, a 70-inch TV on the wall and vintage wine ads hung tastefully around the room.

But in a snap, Merritt said, it can be converted to a dining room. Recently, the fine-dining club La Chaîne des Rôtisseurs had a dinner for 30 with chef David Henry of The Hutch (the soon-to-be successor to The Coach House) in the room. Several wine distributors have held tastings there, as well.

But usually, it’s just a place where members stop by to pop open a bottle or two with friends during Thunder games or get away from the office.

“It sometimes turns into a game of who has a better bottle,” Merritt said.

Patting the long, wooden table, he explained that one of the club’s rules is that any open bottle placed on top of it is game for all to try.

However, the main draw of the facility is behind the next door.

Inside the cellar, the whir of air conditioners raises the volume of the room, and the walls are lined with wooden lockers of various sizes. Merritt pulls out his keys to unlock a few of his units.

The humidity-controlled room stays at 55 degrees Fahrenheit, and a backup generator is there to ensure power outages don’t affect the quality of the storage space.

Access to the clubhouse is a bit more — $90 for those with lockers and $142 for those without lockers each month — but membership comes with benefits. In addition to using the space for private events, The OKC Cellar plans to bring in tasting events for wine and wine pairings throughout the year.

The Club Room also boasts a full kitchen, Riedel stemware and free Wi-Fi. More than anything else, though, it’s a place for oenophiles to hang out and share some “cellarable” wines at a fraction of the cost they might encounter in a restaurant.

Merritt said he’s planning an event called Open that Bottle, encouraging members to find that vintage they’ve been dying to try but haven’t found a reason to pop the cork.

“Anything that helps consumers enjoy wine more is always a good thing,” she said. “Hunter is providing people a safe place to store their wine.”

There are many reasons customers might choose to store wine off-site, she said. Especially for frequent travelers, having a spot that is temperature- and humidity-controlled is important for maintaining the integrity of fine wine.

Some might assume Oklahoma City is a small fish in the wine scene, but with a growing number of sommeliers like Hendrickson, the metro is seeing an influx of excellent vintages that are harder to find in some larger cities.

“I’ve been to events [at The OKC Cellar], and I’ve been asked to help with events there,” she said. “I’ve recommended his location because it’s an easy place for people to meet and it’s a good size for these kind of events.”

Hendrickson said those still scared of dipping their toes into the wine scene should be on the lookout for more opportunities to taste and learn about wine. Sommeliers all over the city are putting on more low-key, casual events to help introduce customers to new bottles.

“Half the battle is trying something new,” she said. “Hunter knows what he’s doing. I think there’s a lot of promise there.”