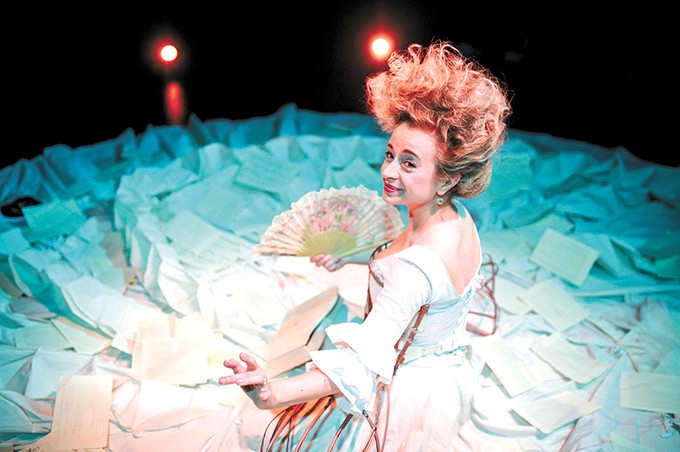 The first thing most people who go to see The Other Mozart will notice is the enormous Victorian-era dress that covers the entirety of the stage. The elaborate gown is as impressive structurally as it is symbolically. It’s the perfect way of framing the story of a talented woman forgotten in history.

The Other Mozart is a one-woman show by New York writer and performer Sylvia Milo. The play enjoyed a critically successful off-Broadway run in New York at HERE Arts Center and in London at St. James Theatre. It brings its ongoing tour to Oklahoma Contemporary Arts Center with two 8 p.m. shows March 2-3 at the art center’s State Fair Park headquarters, 3000 General Pershing Blvd. Admission is $18-$25.

The performance piece is also the first installment of Oklahoma Contemporary’s three-part Women in Performance series with two other shows scheduled to come through the space later in the year.

Considering Wolfgang’s great and lasting fame, most are surprised to learn he not only had a sister, but that the two toured together as children. Nannerl was sometimes billed above Wolfgang in their early performances.

Yet social expectations of the day prohibited Nannerl from pursuing a music career far past her youth. As Wolfgang grew in fame, his sister’s legacy fell farther into the shadows.

That is why the large, 18-foot dress, worn in the show by Milo, carries such symbolic weight, even while its physical form is surprisingly light. The dress was designed by National Theater of Poland costume designer Magdalena D?browska and weighs just 50 pounds. It fits inside a suitcase when folded.

“[D?browska] created an incredible, sculpture-like dress with detachable pockets and foldable, accordion-like elements symbolizing the opulence of the 18th century and the lavishness of court life that the young Mozarts were part of on their tours,” Milo said. “At the same time, the size of the dress limits movement, which symbolizes the restrictions placed on women at that time.”

Nannerl did compose original music in her life, but it has either been destroyed or, like the rest of her legacy, lost to history. Instead of blindly guessing at what her music might have sounded like, sound designers Nathan Davis and Phyllis Chen used sounds that would have existed in Nannerl’s era — clavichord and harpsichord — to create a musical imagination and sense of wonder that could be interwoven with Wolfgang’s music and other compositions from the era, serving as a contrast between the course of the siblings’ careers.

“Simply put,” Milo said, “his music gets grander and more complex as her world slowly shrinks.”

Milo, like most people, was stunned to hear Wolfgang had a sister who was, at some point, at least as talented as her brother. Milo grew up as a musician and a lifelong fan of Wolfgang’s music. She travelled to Austria for the composer’s 250th birthday celebration in 2006.

While in the country, she took a tour of Wolfgang’s former apartment. On the exit wall, she noticed a family portrait that showed Wolfgang and his sister playing the piano, fingers interlocked on the keys.

It was the first time Milo noticed Nannerl, and she was immediately compelled to learn more about her story. She knew right away that she wanted to play the character. She wrote the script, which relies heavily on family letters Nannerl saved, with director Isaac Byrne in about one year’s time.

“Wolfgang is one of the greatest classical composers, and we know his music so well,” Milo said. “We also know his story so well; there is such interest in his story. And yet nobody was telling Nannerl’s story.”

Milo grew up dreaming of a career in music, not theater. She has studied studied violin, jazz and composition internationally. Her first forays into theater and acting were an attempt to improve her musicianship.

“I decided to take an acting class to find out what are the secrets that actors know about being on stage that musicians may not know,” she said.

In that class, she worked on Tennessee Williams’ Blanche DuBois monologue from A Streetcar Named Desire. It made a big impact on her.

“It felt to me like music, only even fuller,” she said. “My dream changed. I went to acting school.”

The rest, of course, is history. In addition to telling the story of Nannerl, The Other Mozart also brings Milo’s story full circle with a return to her classical music roots.

Years before Jeremiah Matthew Davis worked for Oklahoma Contemporary as its artistic director, he was working in New York City, designing theater sets and immersive performance experiences. It was during a recent visit to his former city that he first heard about The Other Mozart.

An old colleague told him she had been working on this cool show, and Davis went to check out a rehearsal and talk about it with Milo. He loved what he saw, but he was not yet committed to basing an entire series on the show. Later the same day, when he met another former colleague, writer and actress Kerry Ipema, about her One Woman Sex and the City performance piece, the idea for Women in Performance took off.

“That’s when it hit,” Davis said. “I was like, ‘This could be something that we could do as a series at Oklahoma Contemporary.’”

The original intention of the series was to highlight amazing contributions women are making to the performing arts — contributions which sometimes get overlooked.

“With the way production schedules are arranged and the way shows are ‘greenlit,’ so to speak, all too often, those works are cast aside in favor of works that are written by men or performed primarily by men or directed by men,” Davis said. “This is an opportunity to showcase some of the other amazing work that is out here around the country and in Oklahoma.”

Davis said when one looks at the numbers for theater graduate training programs, it is close to a 50-50 split between men and women. But 10-15 years into their careers, women are far less represented.

Aside from The Other Mozart, Oklahoma Contemporary is teaming up with Fresh Paint Performance Lab to produce an original production tentatively titled Honey. The show is scheduled to run June 14-23.

“That’s going to be wild,” Davis said. “It’s an immersive experience. We’re going to completely rearrange the space. It’s going to be a multi-sensory experience that I don’t think has ever really happened here in Oklahoma City.”

In October, Oklahoma Contemporary is bringing Ipema’s One Woman Sex and the City to its theater space.

“While it will be a loving send up to the show that everyone remembers fondly, it’s also really an opportunity to explore ideas related to feminism and women’s equality, women in the workplace,” Davis said. “It actually deals with some pretty heavy-hitting subject matter even though the context seems frivolous.”

“It’s just a handful [of shows],” he said, “but it’s one small effort to try and shift the conversation.”